Through A Pair Of Binocs, Darkly

Accounts of intelligence cops who scouted the frontline

K. Tashi
Constable with the State Intelligence Bureau during the war

I was 25 then. We knew the Chinese were definitely up to something, for we had been filing reports for some time. I’d say their movements increased in the days before the war broke out. One night, we heard continuous firing. Our worst fears had come true. The Chinese had attacked. I was scared.

At my observation post, we were four—our officer commanding (OC) and three constables. Realising that a full-fledged battle had broken out, we abandoned our post and ran downhill, towards Assam. Despite the hunger, I was unable to eat anything for six days. I felt like drinking a lot of water, but couldn’t swallow it. Eight days of roaming and avoiding the enemy, and we finally reached a refugee camp that had been set up in Shillong. We had come across via Bhutan.

On the 13th day after the war broke out, as we headed back to Tawang from the Shillong camp, we saw bodies of Indian soldiers that the Chinese had laid out in neat rows of 40 and covered with earth. At Se La, most bodies were of Sikh soldiers. Dogs wandered about, sniffing and biting at the bodies. Some bodies were headless, some we found stuck between rocks standing out in rivers and streams. I had never seen so many bodies—there were too many bodies, everywhere.

A day later, ceasefire was announced. After another couple of days, government officials came, took charge, performed the last rites of soldiers. We were ordered back to our observation post and told to interview the villagers who had stayed back. The villagers said the Chinese did not harass them, but handed out medicines for the sick, food for the hungry. 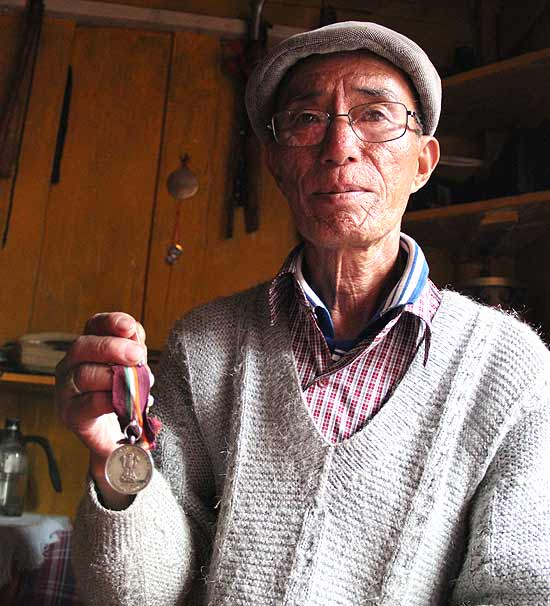 Tenzin Norbu
Constable with the State Intelligence Bureau during the war

Firing was first reported two months before the war began. There would be firing morning and evening, with a break during the day. Suddenly, it escalated into full-fledged war.

There was a river, the other side of which was Chinese territory. In one of my reports, I had mentioned that the Chinese were replicating our positions on their side.

I remember the Chinese destroying the Khiinjamanu bridge, which connects one mountain range to another. At my observation post up high, I was with a villager. We watched with my binoculars as the Chinese advanced around sunset towards our side in large numbers. They stayed put in the night. We slept for a few hours. When we woke up, the Chinese had moved further. I saw them attack an IB checkpost. The only connecting bridge was destroyed, so I could neither go uphill nor downhill. I ran straight into the forests and stayed there alone for three days. If I was caught, the Chinese would have killed me.

I somehow reached a small village near Zhimidhang, and took refuge in a house. The owners were leaving for a refugee camp. I was left alone in the village, and they informed the authorities of this. Later, they tried to contact me by whistle calls. Somehow, I reached Zhimidhang, where a villager called Bhuti offered me tea. I was so scared, I could neither eat nor drink. I was in office clothes and would be picked up by the Chinese, if I was spotted; local dress would give me a better chance of escape. A shepherd helped out with a dress, and I cut my hair roughly, with his sickle. Then the Chinese came, the villagers ran away. Chinese soldiers opened the door of the house I was in, but they were tired and let me be as they slept. I took a vessel and decided to go out and  pretend to be washing it; if they remained asleep, I’d run to freedom. Luck was on my side: I ran lightning fast and reached a group of shepherds. I picked up some of their luggage so I could pretend to be part of the group. On the way, we encountered two Chinese soldiers. I removed my wrist-watch and prepared to throw it away to escape detection as a non-local. But they let us pass. We even waved good-bye to them. We finally reached Namchu; I danced my way into Namchu. Then I reached the refugee camp in Shillong and returned only after the ceasefire was announced. I received many medals. But our job did not end, we continued to note Chinese movements and report them. 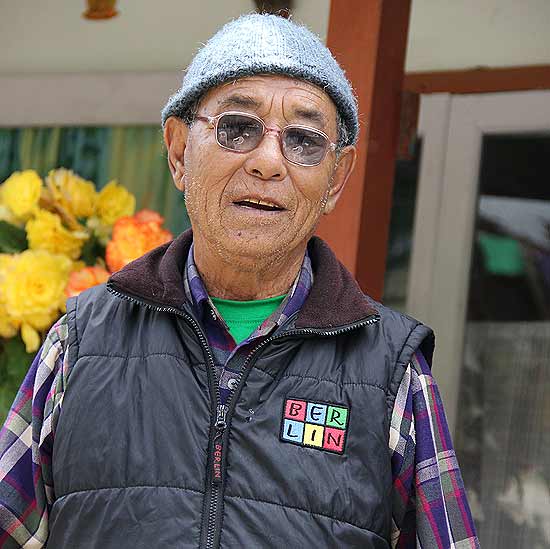 I was posted at Bum La when the Chinese attacked India. We were immediately ordered to leave the post: the Chinese had already crossed Se La and our army had been forced to retreat. This was what we learnt from our lines of communication.

For some days, the Chinese soldiers (we had noted from where I was posted) were just gathering stones and building bunkers. We sent reports that they were probably preparing for a major attack. But they didn’t do anything much till October 22. The next day, at 3 am, the Chinese attacked, finishing off an entire unit of Assam Rifles within half an hour. They even took some prisoners. We were at the base with some officers of a Sikh regiment posted in the region, so we managed to escape.

Whatever intelligence we gathered, we used to send it through the signals unit of Assam Rifles to its headquarters in Tezpur. But after the attack, the entire system collapsed. We were forced to file reports by going on foot ourselves or sending them across with couriers. We gave updates to our seniors, and they passed it on to headquarters. After the attack, everything was in a mess, everything was confusing. There were bullets flying everywhere, one of them grazed my foot and I thought death was certain. All we could hear was bullets being fired and grenades exploding. We started running to save our lives. It was  completely chaotic. But somehow, I managed to avoid being killed in the gunfire. I was a bachelor, so I had fewer worries; but there were some men posted with us who were worried about their families, their wives and children.

It’s not a nice thing to say—after all, I am an Indian and this is my country—but the Chinese were far more advanced than us. They managed to invade us even though there were no proper roads to transport their troops and keep lines of supply open.

During the war, I spent some time in the same room that was occupied by Subedar Joginder Singh Sahnan, who was later martyred in the brave defence he and his men put up. He was awarded the Param Vir Chakra. I have also seen Brig John Dalvi commanding his troops. I cannot tell you much more about what I did in my line of duty. After all, I was with the Intelligence Bureau, and still draw a pension from our government. Those were different times. Today, the army calls us for the memorial services. However, they don’t seem to care for us. 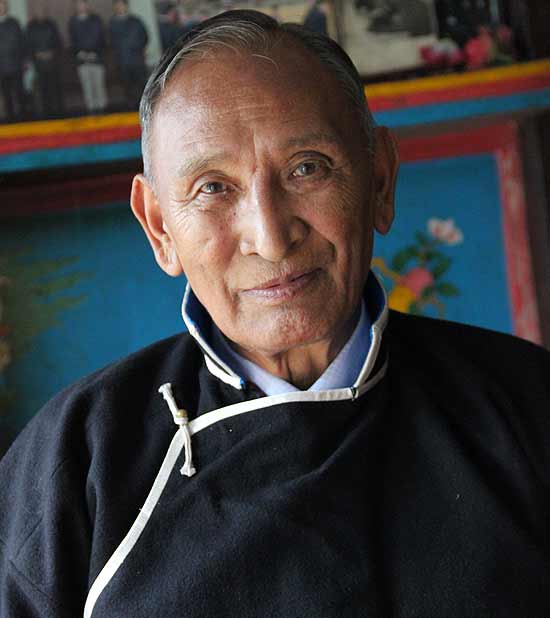 Karma Wangchu
Constable with the State Intelligence Bureau during the war

Around the time of the war, I was posted near Namka Chu. The Chinese were shoring up positions. Our soldiers were also moving in, but I remember that our soldiers were looking weak and tired. My job was to observe Chinese movement through binoculars, count the number of soldiers in batches of ten and report details to our headquarters in Zhimidhang. We also counted and reported how many Chinese soldiers were on foot, how many on horseback, what sort of equipment they were moving in. The Chinese were advancing systematically. We often saw them stretching wires from one side of the river to another—probably communication lines.

After the Chinese attacked, senior officers decided we would leave as soon as possible. We were asked to mingle with villagers to avoid detection as government men. I was told I’d be the last to leave; my instructions were to try to report if anyone of us was picked up from among the villagers. Even as we were discussing this, we spotted Chinese troops on tree-tops. Some other troops from across the border were taking vantage positions. We just ran for our lives till we reached Thaklang village.

After a few days, a party of 13 Chinese soldiers came by. We camouflaged ourselves. I curled up on the ground. Some took to the trees. But the soldiers passed us by. We started running, but suddenly saw there were seven more soldiers, who spotted us and started firing. Luckily, I was able to dodge the bullets and was unhurt. I reached a secure area and met some officers there. That’s when we learnt the Chinese had taken over Namka Chu. I told my seniors, “Now, the capture of Tawang is inevitable.” But they wouldn’t listen.

There was a small bridge near Zhimidhang, where we kept vigil for nearly a week, two hours per person. Then, my seniors told me I should rest and eat a little, maybe take off my shoes, which I’d not taken off in a week. It was cold, ice all around. We melted it to cook rice. Then a villager came and said he’d seen Chinese soldiers. We just ran, throwing away the rice. By the time we reached a jungle, the soles of my shoes had worn off. We saw Chinese soldiers near a gompa. We somehow reached Shillong, via Bhutan. We returned only after the ceasefire. I’ll never forget the day I returned home. My heart was beating fast, and I had no sense of where India ended and China began.

As told to Toral Varia Deshpande