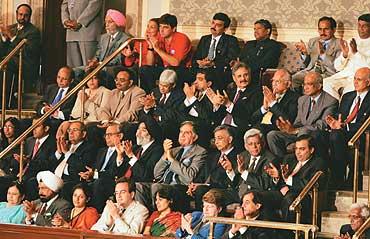 While the hype is yet to reach its critical mass, there are many ifs and buts. First, of course, is whether the US Congress will ratify the 123 Agreement with India later this month. Assuming that does happen, there are other issues—from liability laws and structural changes in India's nuclear industry to existing relationships with other nuclear powers—that will impact what share US companies will get of the Indian nuclear pie. As for the role of Indian companies in the nuclear industry, it will expand—but private nuclear power generation is going to be a while coming.

So, what can we expect in the short term? India can look forward to being able to import natural uranium to fuel its 17 N-power plants, many of which are running at 54 per cent or less capacity, the ideal being 90 per cent. Five more reactors are under construction by Nuclear Power Corp of India (NPCIL), which leads state monopoly on nuclear power generation. "We plan to set up eight reactors totalling 8,000 MW with an investment of Rs 50-60,000 crore," adds S.K. Jain, CMD of NPCIL.