Development is the only mantra. Sheila pips the BJP again. 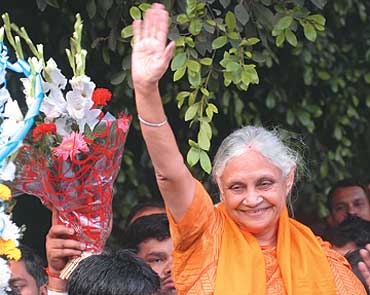 A few hours before the Delhi verdict became clear on December 8, frantic talks were on as senior Congress leaders tried to wean supposedly 'winning' BSP candidates to their fold. So uncertain was the mood in the Congress camp (at least four BSP potentials had expressed a willingness to shift allegiance). But by 2 pm in the afternoon, the BSP men were forgotten. The negotiators from the Congress had stopped taking their calls.

In contrast, the mood in the BJP was initially upbeat. Party strategists believed that after two consecutive terms, the anti-incumbency factor would surely make the Congress buckle under, Sheila Dikshit or no Sheila Dikshit. Besides, the brains trust was pretty upbeat in the thought that the Mumbai carnage which, incidentally, came to an end the very day on which Delhi went to polls (November 29), would certainly swing the city voter to come out in big numbers for the saffron party.

They did come out in big numbers, but their voting preference proved the party managers had got it completely wrong. The results were clearly sub-par, as admitted by Delhi elections in-charge Arun Jaitley at a press briefing. What he did not mention was the party's inability to convincingly turn Vijay Kumar Malhotra into a saleable brand. As the days passed, murmurs were getting louder that those denied party tickets had done more than their fair share to do the party in. But the uninspiring CM candidate was definitely part of the mix.

The story of how Delhi was won and lost makes for an interesting case study of two parties—one which put up a brave front in the full knowledge that it could lose, and the other sure of a victory, caught in a vortex of its own rhetoric. In fact, so sure was the Congress of losing Delhi that the party high command virtually gave free rein to Sheila Dikshit to pick and choose her men before the elections. (This was in sharp contrast to the municipal polls were the BJP had won, where Dikshit had openly carped about her hands being tied.)

For sure, her poll plank built around 'development' still struck a chord with voters. "Vikas ki dor, pade na kamzor (Let development not be weakened)" was the Congress battle-cry. And the campaign seemed to have worked well. With the Commonwealth games next year in Delhi, many felt she would be a more presentable CM. Others supported her for the success of the Delhi Metro. And women seemed to have warmed up to Dikshit's government subsidising the LPG hike by Rs 40. Issues like the controversial bus rapid transit (BRT) corridor and inflation, which the BJP had raised, seemed to have had no major impact on the electorate.

So, is there a relation between electoral outcomes and governance? A city-based NGO, Satark Nagarik Sangathan (SNS), filed over 60 RTI applications to gauge how well MLAs performed in their last term. The result shows that performance does matter although caste equations still work. Under the local area development fund, MLAs receive a non-lapsable Rs 2 crore every year. Chief minister Sheila Dikshit was the best, allocating Rs 8.7 crore on development works. She denied a ticket to sitting MLA Meera Bhardwaj who released only Rs 1.4 crore. While many from the BJP as well as the Congress won despite poor performance, SNS activists now say if a report card of elected representatives is brought out in time, there's no doubt it will help voters make wiser decisions.

When Mumbai happened, the BJP went full-steam ahead on the terror issue. This, many in the party now concede, may have switched off the voter. Says Shahid Siddiqui, formerly with the SP and now with the BSP (a party which was supposed to play spoiler and make a third consecutive win for the Congress difficult), "The Mumbai terror actually managed to sway a huge percentage of Muslim votes in favour of the Congress. Delhi is a city of minorities. So, everyone was scared that if the BJP comes to power there would be retaliation." The BSP, incidentally, doubled its voteshare to 13.8 per cent in the recent polls.

For the BJP, the loss of Delhi comes as a major blow. Nothing it did could prevent a Congress victory—even the fervent, last-minute appeal to voters from former prime minister Atal Behari Vajpayee.

When Fear Didn't Enter The Booth