Russia-China-India, first portents of a new axis in the making? 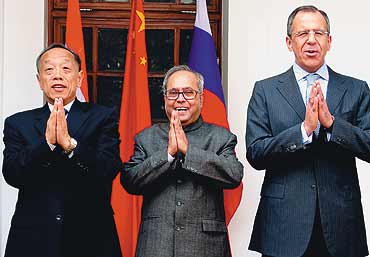 outlookindia.com
-0001-11-30T00:00:00+0553
Can India, China and Russia form a strategic triangle? When this idea was first mooted by the Russians, in the declining years of Boris Yeltsin, it was met with a mixture of derision and a certain apprehension. Could three nuclear powers, accounting for almost 40 per cent of the world's population and nearly a quarter of the total area of the planet, unfurl the banner of revolt in a unipolar world that had its centre of gravity elsewhere? Most dismissed it as far-fetched, absurd. The Chinese were reluctant, the Indians intrigued. But the Russians persisted.

At the end of the sixth meeting of foreign ministers from these countries, it was clear that obituaries for an emerging axis have been slightly premature. As Union external affairs minister Pranab Mukherjee reeled off the outcomes of the meeting (that lasted 105 minutes at the Billiards Room in Hyderabad House around a U-shaped table, with India at the head, Russia on the right and China on the left), it was obvious to the assembled media that the trilateral meetings have managed to acquire an institutional status. And when Chinese foreign minister Li Zhaoxing played to the gallery (see box), it seemed a far cry from the first hesitant meeting on the margins of the UN in 2002. Li's predecessor, Tan Jiaxuan, had then refused to even pose for the cameras, leaving the Russians to put the best public spin on this enigmatic development.

One year later, it was another story altogether. At the end of the second meeting, all three ministers were caught on camera holding hands, the three new geopolitical musketeers. The picture, somehow portentous, was reflected and debated upon in the world. For the Indian foreign policy establishment, the debate has been settled in favour of this triangular development, and last week's proceedings confirmed there now remained no room for ambiguity.

This could be determined both from the form and content of the discussions in the Billiards Room. For the first time, there was an agenda and a structure to the meeting. Even as recently as Vladivostok, where the last meeting was held, there was an air of casualness—lacking structure, the participants could bring any topic to the table. All that changed, say sources, after the G-8 summit in St Petersburg last year, when Russian President Vladimir Putin, determined to send a signal to the West, sat in a separate confabulation with the Indian prime minister and the Chinese president, thereby politically formalising the triumvirate in no uncertain terms. At Hyderabad House then, the agenda allowed, say sources, for each country to share its thoughts formally on a range of subjects: Afghanistan, the Korean Peninsula, Iraq and Iran, and the Middle East, subjects that go deep into the heart of Western interests as well.

Indian diplomats say the trilateral meet is a win-win situation for New Delhi, acknowledging, among other things, India as a big league player. As the trilateral process has the potential of making the world less pivoted around the West, it immediately confers on New Delhi a large geopolitical role.

It also increases the range of diplomatic options for India and allows New Delhi to play on two unfolding tableaux simultaneously. The process forces China to acknowledge, as the joint statement does, that India has a legitimate role far beyond the region, thus leaving Pakistan with a lesser, regional role. As far as the Russians are concerned, they would like to see an acceleration and blossoming of a relationship between India and China, and consequently giving heft to the weakest political leg of the triangle. It helps project a role for India in Central Asia as well. Certainly, the trilateral meetings will help define a more realistic view on terrorism, as India sees and experiences it, with respect to the other two "trialogue" members, especially China. Sources say that in Hyderabad House, Pakistan's "deeply ambivalent" role on terrorism came in for sustained scrutiny during discussions on Afghanistan.

Diplomatic sources say New Delhi has been extremely careful not to be drawn into the grievances one or the other player may have against the sole superpower; it wants nothing to disturb the emerging relationship with the United States. There is, finally, a line in the joint communique saying both Russia and China would actively facilitate India's membership to the Shanghai Cooperation Organisation. The reality, say sources, is somewhat more complex. Russia doesn't seem keen on either Iran or Pakistan joining the SCO, and China will not be amenable to Indian membership without Pakistan clambering on board as well.