I once chanced upon my hero, the PM. But it was two deaths that showed me the real India. 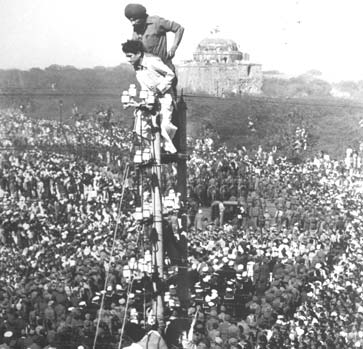 A winter evening in Baroda. My friend Kirit and I were playing outside the temple that occupied the ground floor of the block of flats in which both our families lived. His family, the Patels, lived on the first floor and we, the Desais, lived on the second floor. The whole house had just four flats and fronted at a busy crossroads, with one road leading to the Laxmivilas Palace and another leading to Dandiya Bazar. The temple jutted next to a paan shop and a barber’s establishment.

That day the two of us, just seven years old, were unhappy. The temple was not having its usual pooja and hence no prasad for us to eat. There was a heavy atmosphere. Then we heard that someone called Godse had killed Gandhiji. We were both called back inside our homes. Reaching my home, I found our front room full of people; at least thirty to forty grown-up women and men were standing listening to the radio we had placed in a bracket on the wall. In those early days, ours was one of the few homes with a radio. My parents were there but no one was serving any tea. All had tears in their eyes and there was a gloomy commentary going on. For a seven-year-old, this was a very unusual encounter with Gandhiji’s uncanny power over the ordinary people of India.

Fast forward five years, and we were in Bombay. We lived in a government housing colony in Worli which in those days was sparsely populated, and there were a large number of coconut trees around. The Century Mill was still functioning and Bengal Chemicals was the one building which bus drivers recognised as a stop. I walked to a school in Dadar every morning, a half-hour walk around seven in the morning. One day, in 1952, I was walking along with friends, happily talking and half running to get to school in time. There was something suddenly in the air. Outriders passed on motorcycles. We were by that time just across from Kismet Cinema in Prabhadevi. We next saw a large car with an open top, in it was Pandit Nehru. As his car passed the cinema, he was curious. So the car slowed and he stood up to have a good look at the posters for whichever film was being shown. There, for a split second, I was three feet away from my favourite person. He was devastatingly handsome, better than any picture I had seen. And then his car sped away. That was my brief moment in Nehru’s presence.

Another few years later, and by then I was in Ramnarain Ruia College in Matunga. That too was a morning college if you were following an arts degree as I was. But by then I was sixteen and spent much of the afternoon reading in the library. One day in December, outside our college, I saw a queue of people. They were obviously very poor but were dressed in what must have been their best rags. These were people one never saw or at least noticed walking the streets every day. It was like what Gorky called the lower depths. The queue was stretching from somewhere past Ruia College and on to Poddar College which was next door.

Being curious, I tried to trace where the queue led to. Hundreds of very poor but dignified people, yet again with tears in their eyes, inconsolably sad, were standing patiently. Walking along towards Tilak Bridge, I at last realised the cause for the queue of the invisible masses surfacing. It was a queue outside the house where Dr Ambedkar had been living all these years. It was a house which we passed often but never took much notice of. That day, I saw an India which I had never seen before. It was an India which we ignored passing by. They were our servants, our garbage collectors, our shame whom we hid from our eyes. They had come to bid goodbye to the one man who had given them the courage to come out and assert their place in independent India.

That was a sight that stayed in my mind forever. I had seen India at last.