The sea, the fresh catch, the Kerala fish curry, from Kochi to Kozhikode 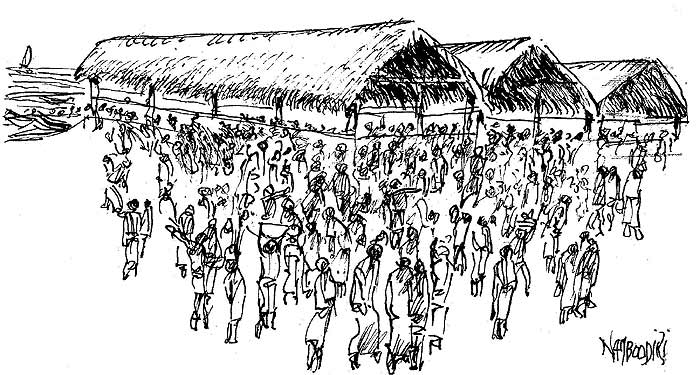 “Poooyeeey,” the call of fish vendors, is a childhood sound I miss. Hundreds of such mellifluous sounds, rising from village roads, narrow alleys, and from the small fishing craft plying in the canals in water-bound villages, would add up to a happy Malayali morning. The calls have now given way to honks from horns fitted on fish sellers’ mopeds; the sound, nonetheless, remains welcome as ever.

The sound blows the roof off...the auction is the place to catch the reticent Malayali at his animated best.

Fishing harbours are a good place to start looking for how fish get on to dining tables in Kerala. The one in Kochi, among the biggest in the country, is an extraordinarily live place, with each homing vessel, laden with silvery catch, receiving high-decibel welcome. The sound blows the roof off when the auction starts. It’s also the place to catch the usually reticent Malayali at his animated best.

I used to be amazed by the variety of fish at the harbour: matthi (sardines), ayla (mackerel), avoli (pomfret), neimeen (seer fish) and choora (tuna) were common. An occasional catch of seelav (pickhandle barracuda) was much cheered. In terms of size, sravu (shark) and the diminutive natholi (Indian anchovy) are at opposite ends.

Shark taught me the Zen and art of eating fish. The shark’s size prevented it from being carried by last mile vendors so I had not tasted it till my early 20s. One lazy afternoon, sauntering down Chalai bazar in Thiruvananthapuram, I found myself staring at a sign announcing sravu puttu—a dish made of mashed shark meat.

An old man sitting before me was obviously enjoying his sravu puttu. He would pick up a small piece from the dish, close his eyes, and chew on it reverentially. I could feel him listening to the roar of the seas. It was a moment of piscine epiphany for me: I gawked at him, as if he were Santiago, the old fisherman in Hemingway’s Old Man and the Sea, sitting on a skiff, off the Cuban coast, and chewing on strips of raw tuna. It was like a replay from the novel: ‘He picked up a piece and put it in his mouth and chewed it slowly. It was not unpleasant. Chew it well, he thought, and get all the juices. It would not be bad to eat with a little lime or with lemon or with salt...he ate the other part of the piece that he had cut in two, he chewed it carefully and then spat out the skin.... He took another full piece and chewed it....’

If eating fish is a matter for meditation, catching it is an altogether different and dangerous game. The fear of deep seas and the unpredictability of catches make fishermen look up to hundreds of spirits, deities and demons residing in the ethereal worlds above the low-hanging clouds over the Kerala coast. At one time, chapels dedicated to St Christopher, the patron saint of seafarers, used to dot the Kochi coast. It was also the domain of Kadutha, the spirit of a dead Nair sorcerer, and Marutha, that of a Pulaya woman sorcerer. Both Hindu and Muslim fishermen propitiated Muthappan (Granddad), the presiding deity of Parasini temple near Kannur in north Kerala.

In a couple of villages in Alleppey, there are shrines to Kadalamma, the Mother Goddess of the Sea. Fisherfolk believe that Kadalamma was showering her boundless kindness when the ‘chakara’ phenomenon occured. Shoals and shoals of fish swarm together in muddied waters. The scientific debate on how chakara—peculiar to the Kerala and South American coasts—forms is still inconclusive. For the fishermen, it was Kadalamma’s boon; they could go in their fishing craft and gather as much fish as they could take. 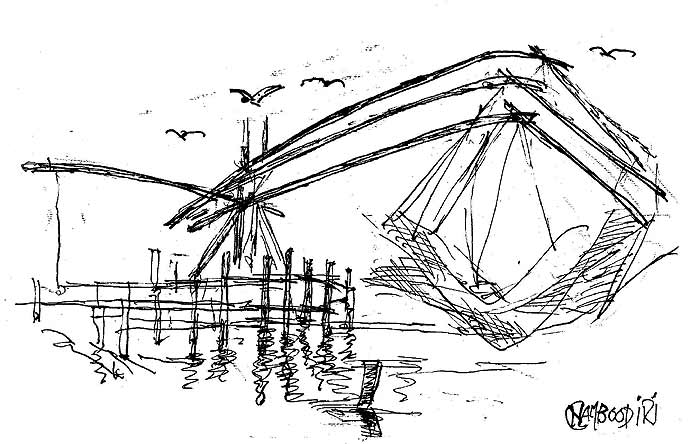 In Kerala, fish curry is a daily fare for ordinary and even poor folks. It is poured into rice much like sambar or lentil curry. The cooking is minimalist: chilli powder, imbuing the dish with a dark red hue, is the main spice. On special occasions, ground coconut is added to give the gravy more body.

The colour changes from red to a shade of brown when fish curry reaches central Kerala, where coriander powder joins the recipe. The great Kottayam dish of ‘fish pappas’ is a good example of a creative use of the ingredient. A recipe for pappas that I have had preserved for a long time was given to me by the matriarch of an old Syrian Christian family, on the bank of the Meenachil river. It has elaborate instructions about cooking fish in three stages: first in the thinnest coconut milk called the ‘third milk’, followed by the ‘second milk’ till it is half-cooked, and finally when done, add (just add, don’t stir) the thickest of them, the ‘mother milk’.

Around the same region, towards the Alleppey coast, the curry takes a yellow hue; turmeric comes in, probably to mask the strong marine smells of sardine, a common chakara species. The old port in Alleppey is connected to the backwaters by a labyrinthine system of canals, with a steady traffic of boats. In a shack on a canal bank, I had my first mango and sardine curry: mango for sourness, instead of the usual “meen puli (fish tamarind)” kodampuli.

The best thirutha are caught in the ‘Chinese nets’...it may have been the Portuguese who got it from Macau.

Kochi is the gateway to many new tastes for the Malayali palate. Fish molee, the signature coconut milk dish of central Kerala, seems to suggest a Malay connection. It could have come through the old trade route from Malacca to Ormuz, passing through Kochi, which at one time the Portuguese controlled. It is one of the few fish dishes with vinegar—a souring agent with a definite Portuguese stamp—in it.

Vinegar is also a great preservative. During summer holidays, we used to wait for the arrival of Meenakshi valiamma (great aunt) from Chavakad, in northern Kerala. The word meen (fish) in her name was apt, for she was a great cook of fish. She would arrive with 2-3 men in tow, carrying big Chinese jars, packed with fish fry that stayed fresh for weeks. The secret of its longevity was that after frying, she dipped the pieces in vinegar and sun-dried it. The Chinese jars prompted the children to undertake many surreptitiously sinful journeys into the store all through the summer.

From shark to sardine, the fishes discussed so far come from the sea. But the two sought after Kerala fishes, karimeen (pearl-spot) and thirutha (mullet) are freshwater species. Of karimeen, I am reminded of what a wine critic said about Chianti, “over-rated, but tourists coming to Italy love it”. The real nirvana lies in slowly partaking of thirutha.

The best thirutha are caught in the Chinese nets—an iconic symbol of Kochi—placed at the harbour-mouth, where the river Periyar meets the Arabian Sea. Parts of the contraption—though called Chinese—have Portuguese names. This could be because the Portuguese brought the nets from their Chinese outpost in Macau. In the 1960s, a couple of open-air ovens came up here to cook the fresh catch (for the benefit of the more impatient fish lovers). Now, after Fort Kochi went the Goa way, there’s an overabundance of fish joints near the Chinese nets.

However, it was the prawn that changed the face of Kerala’s fishing industry. More precisely, frozen prawn, which commanded big markets abroad, especially in Japan. My memories of succulent prawns take me back to the late Cohen, one of the last of Kochi’s Jewish community, who also performed duties as the priest at Kochi’s synagogue. He owned a fishing boat, which he gave on hire. Along with rent, he was also entitled to a customary portion from the day’s catch. If it was prawns, which is not kosher, he would distribute it among friends. My father was his colleague and a dear friend; we cherished the deep sea bounty with gratitude to Cohen Sir. Fish cooked in a green gravy of coconut and coriander leaves ground together is what I faintly remember of the Kochi Jewish fish curry. There aren’t many people left now to ask for the recipe. 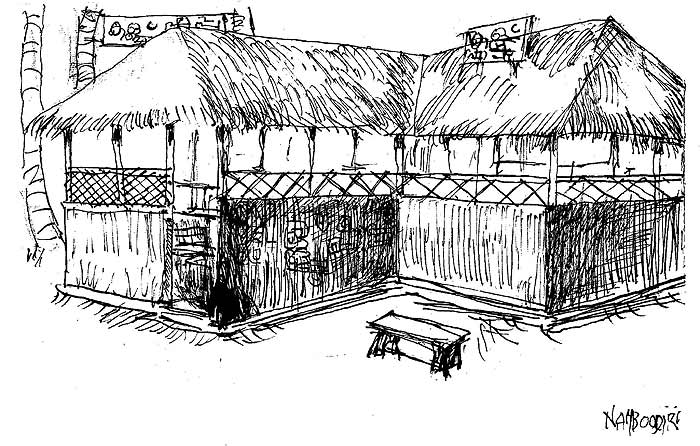 The Malayali believes that fish cooked in anything other than the mud pot or ‘chatti’ doesn’t taste half as good. Once I got myself invited to a friend’s house because his grandmother was a great fish cook. Mackerel was the fish. I still remember my friend’s grandma, doubled over by age, walking slowly to the kitchen, her eyes narrowing as she examined a tall stack of mud pots. “The fourth from the top,” she said, “that’s the one for mackerel.” I still can’t say whether it was grandma’s cooking or the putative properties of the chatti that made it the best mackerel curry I have ever had.

He would pick up a piece, close his eyes and chew on it reverentially...it was as if he could hear the seas roar.

A parallel school of cooking that thrives in Kerala is that of those at the toddy shops. At one time, the most acclaimed of these was at Karimbinkalayil toddy shop near Kottayam, where a customer can choose his fish (live) from a tank. The current favourite is Mullapanthal, near Kochi, which is the only toddy shop with a website. Its owner spelt out to me the two cardinal principles of toddy shop cooking. “For one, the food should be enticingly tasty; an alcoholic is looking for any excuse not to eat. Second, it should be very spicy and hot, so that it sears through the benumbed taste-buds of the drunkard.” In 2010, a restaurant opened in Ernakulam serving only “shop cuisine”.

As we go northwards, the fish cuisine gets richer. More and more ingredients are added. New items like roasted fish roe—held together by beaten egg—make frequent appearances on the menu in Kozhikode. Wheel carts sell mussel pakoras. Further up, in Thalassery, in the Mappila kitchen, spices enter the fish cuisine. Perumjeerakam (fennel) ground with raw coconut gives a new dimension to the dish. Thalassery is the fish heaven of Kerala.

A culinary journey through Kerala in search of the perfect fish curry could end up in disappointment now. Cookbooks and recipes have shorn the dish of provincial flavours. In all likelihood, what you’ll get now is a homogenised dish, under an omnibus name, ‘Kerala Fish Curry’. The shark has all but disappeared from the fish markets. Sardines now often come from Mangalore. Prawn-farming has not only wreaked damnation on the environment, but also what you get on the table is a crustacean equivalent of the broiler chicken. Kadalamma has stopped sending chakara to the Kerala coast for a long time now. Some of the big hotel chains that have moved into Kerala with their big chefs go for uniform-tasting, good-looking fillets of imported basa fish. When you close your eyes and chew a small morsel of fish, you no longer hear the roar of the Arabian Sea.

Text: N.S. Madhavan, A renowned writer in Malayalam and author of the award-winning Litanies of Dutch Battery

Illustrations: Namboodiri, ‘Artist Namboodiri’ is a Kerala institution famous for his line drawings