While the movie is gripping and stylish in parts, it loses its hold at crucial moments. 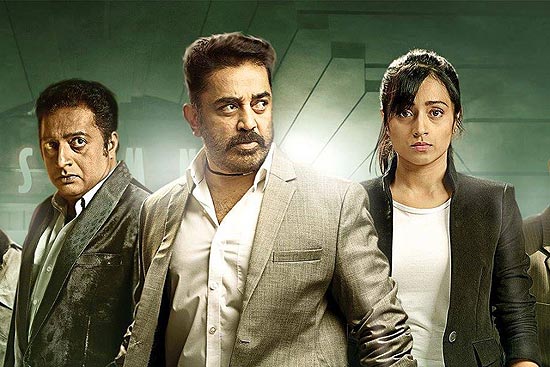 A good premise, a tight story and a tested formula. Thoonga Vanam is based on the French film Nuit Blanche (Sleepless Night), about a cop’s son who is held hostage for a bag of cocaine. This Tamil remake (apparently faithfully reshot) attempts to capture the tension in this story while adding some ‘Indian’ elements. The operation to get the boy back unfolds over one night and largely within a nightclub. Given the French origins of the film, we must not be surprised to see quite a bit of the action in the kitchen, but given that it is an Indian film, we should also not be surprised to see some sloppy detailing in the screenplay. The problem in situating most of the action within the nightclub is that there is a repetativeness: the same places, the same situations. Rather than dealing with this limitation as a spur to creativity, the film becomes a drag after a while. So while the movie is gripping and stylish in parts, it loses its hold at crucial moments. It is remarkable that Kamal continues to unfailingly make films that are different but there is a fundamental fault in many of his recent films: he doesn’t respect the intellectual capacity of his audience. He treats them almost like idiots and misjudges the capacity of the audience of today, esp­ecially of Tamil films (obviously, he doesn’t read reviews of his films either!). At the end of the movie, I felt like saying ‘so near and yet so far’.