This Way To Freefall

Even the 'divine' will have a reckoning. The new have no taste for purgatory, the old will stand no more for caste. Updates 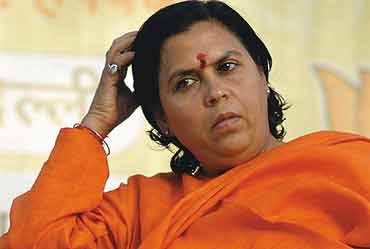 outlookindia.com
-0001-11-30T00:00:00+0553
The party of the gods hurtles down the abyss to political irrelevance. And this, just weeks after president L.K. Advani claimed the BJP was "an instrument of the divine". An explosive secret letter, a sulking sanyasin, a disaffected state boss, and the resignation of a respected leader are all symptomatic of a greater malaise afflicting the party. As little Hanumans of the once-purposeful Hindu army scurry off in different directions, Advani appears to have lost the political plot.

All the sanctimonious talk of chaal, charitra and chehra (behaviour, character and appearance) is now passe. Leaders who sulk, bully and threaten are no longer given a long sermon and shown the door. These days, the 'Iron Man' usually caves in. Take the Uma Bharati drama. The publication of her confidential letter to Advani by Outlook Saptahik has the entire second-rung leadership up in arms against Uma. But sources say her return to the fold is only "temporarily on hold". The influential chartered accountant S. Gurumurthy has made it his business to ensure her homecoming and Advani apparently "always listens to him". Indeed, the buzz is that Uma will be taken back sooner rather than later and may even be drafted into the Bihar election campaign. This news can hardly please Bihar in-charge Arun Jaitley whom Uma had accused of "hatching conspiracies to take his revenge on her".

Meanwhile, Uma has, in a manner of speaking, taken the slow train to Delhi. After her letter bomb went off, she met Advani twice, then landed up in Vellore to meet the jailed Shankaracharya. She is currently on what one of her friends described as a "political pilgrimage". She will visit Hubli (from where she'd started her tiranga yatra), Hyderabad and a temple in Mirzapur. It's a fluid itinerary that can easily be changed. A BJP general secretary, who'd been in Uma's firing line, jokes: "She might take a train, a bullock cart, then a palki or she may climb on a donkey en route to Kedarnath!"

The more likely scenario is that after a brief cooling off period, Uma could end up becoming the BJP's homecoming queen. But this will only happen if the sanyasin can curb her penchant for public and "written" tantrums. She is, after all, the "child of the parivar"; and apparently the sole politician who combines the mandal with mandir motif.

Madan Lal Khurana has no such qualification. He's just the quintessential Dilli Punjabi with a tendency for shooting his mouth off and a small constituency among the city's shopkeepers. After being governor of Rajasthan, Khurana should have been preparing for retirement from active politics. But ever since his return from Jaipur, he's had a penchant for being sighted with Congress leaders. The story goes that he threatened to join either the Congress or the RJD if the BJP couldn't find a more active role for him. So the party obliged, making Khurana the zonal prabhari for Punjab, Delhi and j&k.

The common thread between Uma and Khurana is that both are old faithfuls. Sunil Shastri, though, was a relative newcomer who was considered a prize catch for the BJP when he joined in 1998 after quitting the Congress. The son of India's second prime minister Lal Bahadur Shastri, Sunil was initially made general secretary and spokesperson and given an RS berth. He was also asked to play a role in Uttar Pradesh politics. But the genteel Shastri soon found himself a misfit in the snatch-and-grab culture of the BJP. Firstly, he was not an Advani acolyte, so was sidelined when his master's voice Venkaiah Naidu became party president. Then he had no RSS background and seemed incapable of mouthing the ideological inanities which endear newcomers to the old men of the Sangh. Moreover, once the BJP went into decline in UP, he was fast put out to dry by the state unit.Shastri told Outlook that "there was no reason for me to remain in the BJP.I wrote a two-line resignation and gave it to Advani. I feel the BJP is becoming irrelevant".

Indeed, the list of newcomers who have been unable to fit into the party of the faithful is getting longer by the day. Shastri says there is a strong "insider-outsider" culture in the party. In the past too, politicians like Aslam Sher Khan could not find their feet and quickly left; these days Arif Mohammad Khan seems unable to look people in the eye though he remains technically in the BJP. The honeymoon period for Najma Heptullah and Varun Gandhi is over too, and old-timers constantly grumble about their demands for posts.

These new netas can at least be wished away as they are media-savvy lightweights. But what about ex-Karnataka CM S. Bangarappa, a big fish the BJP had netted some months before the Lok Sabha polls? From the toddy-tapping Idiga community, Bangarappa is the most powerful backward leader in the state. He's believed to have made a difference in at least 25 assembly seats. Bangarappa's mass appeal combined with the powerful Lingayat community's support for the BJP helped the party turn in a respectable performance. But Bangarappa is now so angry with the BJP that he is reportedly thinking of quitting.

The reasons for his displeasure are revealing. Bangarappa had argued, quite reasonably, that since a Lingayat (Yediyurappa) was Opposition leader in the assembly, a backward should be made the party president. But the BJP ignored him and made another Lingayat, Jagdish Shettar, the state unit president. The upshot is that even if Bangarappa remains in the BJP, till an alternative is worked out, he is now technically a "disgruntled element". 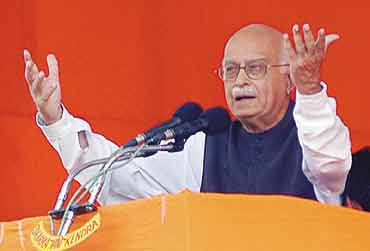 The Bangarappa fracas is yet another instance of the BJP completely abandoning the path of social engineering. In fact, while the media spotlight has remained on the personality clashes, it's the complete lack of planning on the ground that could really be the the saffron party's undoing. Some years ago, individuals like K. Govindacharya had masterminded the social engineering project that played a vital role in bringing the BJP to power.

But a quick scan of the Hindi heartland states today completely exposes the BJP's claims of straddling castes. Firstly Uttar Pradesh, where the BJP had worked out a formidable alliance of the upper castes with the non-Yadav backwards. But today, the Lodh leader Kalyan Singh is a spent force while Kurmis like Vinay Katiyar and Om Prakash Singh have been sidelined. Still ruling the roost in the state unit are two Brahmins, Kalraj Mishra and Kesrinath Tripathi, along with Thakur Rajnath Singh.

Similarly in Bihar, Kayasthas constitute less than one per cent of the population. Yet, Shatrughan Sinha and Ravi Shankar Prasad are the most visible Bihari netas of the BJP. The party's traditional Bhumihar constituency has been abandoned with the sidelining of C.P. Thakur. The state unit president Gopal Narayan Singh is a Rajput. The BJP has no backward leader in the state where they have to take on an obc icon like Laloo Yadav.

Moving on to Jharkhand—once a BJP stronghold—the party is headed for a near rout in the upcoming polls. The Jharkhand base was constructed brick by brick with the parivar's vanvasi kalyan ashrams working in the tribal pocket of the state since the '70s. It was the combination of Dhikus (non-tribals) with a section of 'Hindu' tribals that had made the BJP a force to reckon with. But as Saryu Rai, a local BJP leader, now says: "It's all been undone. The BJP has become a dalalon ki jamaat (a congregation of middlemen)". The party's two Rajya Sabha MPs from Jharkhand are Yashwant Sinha, a Kayastha, and Ajay Maru, a Marwari with diverse business interests.The tribal cause has all been forgotten in the hurry to make a quick buck while exploiting the rich mineral resources of the state.

What's incredible is that the presiding deities of God's own party seem blind to the shifting templates under their feet. And what's worse, as partymen point out, there are more imminent disasters in the making.