This Way To Ayodhya 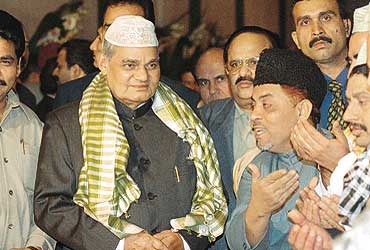 outlookindia.com
-0001-11-30T00:00:00+0553
You have seen Track II diplomacy. Now see Track II politics. Prime Minister Atal Behari Vajpayee's sudden announcement on the Ayodhya dispute last fortnight in Lucknow—that talks are on at 'various levels' to reach an agreement and that some results could be visible by March—was greeted with the same scepticism that's reserved for issues that are not just complex but long-standing. And not by sheer chance, crucial elections to the Uttar Pradesh assembly are also due around the same time.

The strongest uproar as usual emerged from Opposition members demanding to know why the PM had to disclose this outside Parliament. Vajpayee responded with a terse statement that since negotiations were under way, it would be too premature to take names or dwell on details. Construing it otherwise, Samajwadi leader Mulayam Singh Yadav said: "Vajpayee went to Lucknow with the sole intent of making this statement. By doing so, he has tried to incite passions ahead of the assembly polls." The PM, said Mulayam, should have mentioned with whom negotiations were on and how they would bear on the dispute—the threatened temple construction or the demand for the mosque's rebuilding.

No sooner had Vajpayee made the statement that key players in the decades-long dispute began denying that they had been consulted. "No one has approached us," says MP G.M. Banatwala of the All India Muslim Personal Law Board (aimplb), one of the two key Muslim organisations that are litigants in the dispute. In Ayodhya, Mohammed Hasham Ansari, a plaintiff in the Babri case, says the declaration was meaningless. "Not one of us has been contacted, be it our chief imam, any heads of various groups like the Babri Masjid Action Committee (bmac), the aimplb or anyone else." Zafaryab Jeelani and Syed Shahabuddin of the bmac express like sentiments. Militant Hindu groups reacted similarly, with the vhp's acting vice-president Acharya Giriraj Kishore making it known that Vajpayee's announcement was largely unilateral.

What prompted Vajpayee's statement? Well-placed sources classify it as a piece of Vajpayee's classic Track II moves. "The effort is to keep known players out," says a key prime ministerial aide. "It is still early days, so the time for a structured dialogue has not yet started. No basic premises have been agreed upon. The government is not involved in any negotiations, as per the nda manifesto. There are several people who have met the PM and offered their service for a good cause. Vajpayee does not say no." Besides, adds this source, "In Track II you can discuss things difficult to say in a formal meeting. After all, Track II had an important role to play in Musharraf's coming to Delhi."

Just who has 'met' the PM in this manoeuvre? Among the people constantly in touch with Vajpayee are the diwan of the Ajmer dargah—an influential cleric in his own right—some Shia and Sunni clerics from Lucknow and most importantly Qari Mohammad Mian Mehndi of Bareilly, a man appointed by Vajpayee as chairman of the National Minorities Financial Development Corporation, a Rs 500-crore aid-granting institution whose assets are likely to be doubled, thanks to Vajpayee's efforts. Qari Mian, as he is known, was reportedly close to former premier P.V. Narasimha Rao in the aftermath of the Babri Masjid demolition and was also reportedly involved in some firefighting for the Congress.

Sources point to some old-time 'negotiators' on the Ayodhya discord as well. At least two people—the highly-respected Delhi-based cleric Maulana Wahiduddin Khan and Bharti Muslim Majlis president Javed Habeeb—too have been sounded out.The Maulana is an old hand in the Ayodhya dispute while Habeeb was an active member of the National Integration Council (nic), now defunct but an over-active body of politicians and experts before the demolition.

Vajpayee's statement came on the same day that Shia and Sunni delegations met him in Lucknow to thank him for the initiatives on Pakistan. According to one official present, some members—particularly of the Sunni delegation—urged the PM to undertake a similar exercise on Ayodhya. Given Vajpayee's Sangh background, there has never been greater interaction with Muslim groups such as the one that's come to exist in the last two years or so. "He has been in regular touch with the Ulema, Haj delegations visit him, leaders of madrassas meet him regularly on education and minorities issues, in addition to the fact that his own political constituency, Lucknow, is the greatest symbol of Indo-Islamic culture anywhere in the subcontinent," says the source.

In another first, the Minorities Commission, a wholly constitutional body, is playing an activist role. While the commission is currently headed by former judge Mohd Shamim, two of its members, John Joseph and Tarlochan Singh, are in touch with Muslim leaders, mostly individually, to agree on a common minimum programme or to prepare the base for a common meeting ground. Says a prominent Muslim MP: "It looks like an attempt to keep the Hindutva hardliners in good humour," making it clear that any negotiations without known Ayodhya players may not be too easy.

If Vajpayee's idea was to keep his Sangh constituents happy, he seems to have succeeded. Some Hindu groups, particularly those based in Ayodhya, are thrilled. "The PM's name will be etched in gold if we can build the Ram Janmabhoomi temple," gushes Mahant Paramhans Ram Chander Das of Digambar Akhada, a forerunner in the temple issue. Says Gyan Das of Hanuman Garhi, also in Ayodhya: "Our prayers to the almighty could well be answered."

More careful are the bjp's political bosses in Lucknow. Says state bjp chief Kalraj Mishra: "The media asked a question about Ayodhya and the PM gave a candid reply. It was not a suo motu statement by him." But Mishra is also candid enough to admit that with polls due in about six months' time, the 'solution' mentioned by Vajpayee could only help the party electorally.

BJP leaders could also be looking at the bigger picture. At party discussions, say sources, the threat of a Samajwadi government coming to power in UP looms large. "What Mulayam Singh Yadav or his nominated chief minister could do with the disputed land is anyone's guess," says one UP MP, who adds that the SP leader's interests in the temple issue are as deep-going as the bjp's. Clearly, with polls slated early next year, Vajpayee is taking no chances. Ayodhya has brought the bjp centre-stage and notwithstanding the UP government's assertion for most backward caste reservations, Mandir is still probably a better bet than Mandal.