This Way For The Trump Card

Modi meets POTUS this week. An Afghan strategy and an offer of mediation can make it noteworthy. 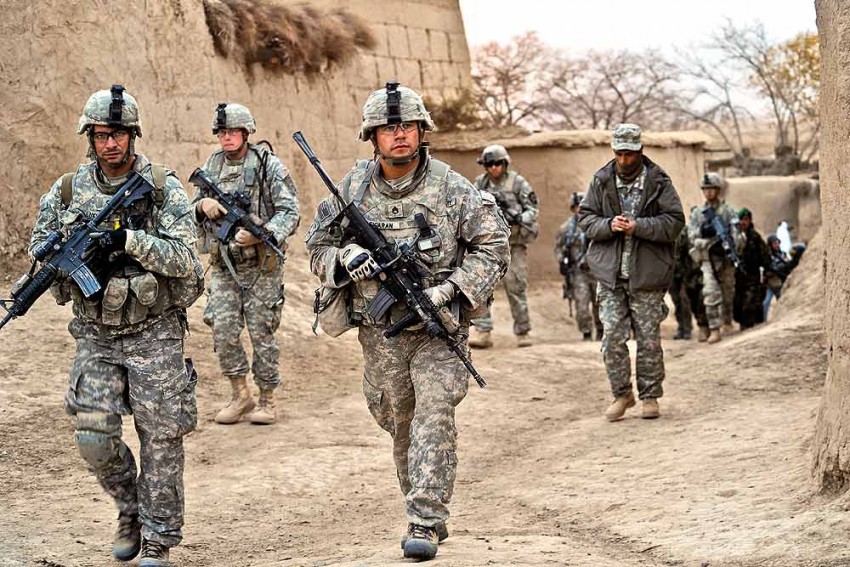 Longest War
US troops in Afghanistan. Will Trump commit more boots there?
Pranay Sharma June 22, 2017 00:00 IST This Way For The Trump Card 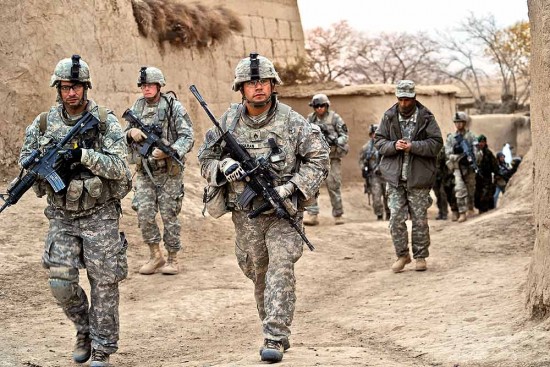 US President Donald Trump’s penchant for midnight tweets and their ability to wreck Washington’s ties with some of its close allies like Germany and Austra­lia might not be giving sleepless nights to Indian policy planners, but is certainly an issue that has begun to bother them.

South Block’s keenness that the first-ever meeting between Prime Minister Narendra Modi and POTUS gets off to a flying start on June 26 could well come to naught by one such devastating tweet—his favourite medium of communication. Trump’s short barbs against Chancellor Angela Merkel and Australian PM Mal­colm Turnbull had embarrassed the two governments in recent months, after he decided to make public their differences.

But many more in South Block are worried about Trump’s disruptive, disjointed politics, prompted largely out of domestic compulsion that has led him to overturn most of the policy initiatives of Barack Obama. Be it the Trans Pacific Partnership (TPP) or Iran or Cuba, Trump is mowing through every single foreign policy move of Obama’s.

Since strengthening Indo-US relations further and dealing with the challenges from an assertive China was also a foreign policy priority of the Obama administration, will that too be reversed by Trump? And if so, which aspects of that policy will be overturned?

Trump’s comments on the Paris Climate Change Agreement while pulling the US out of it and blaming India, describing it as a freeloader has already strained relations between to some extent. Even as New Delhi has decided not to make an issue out of it—except a terse refutation by foreign minister Sushma Swaraj—to clear the decks for a positive start to the Modi-Trump interaction, the uncertainty of dealing with an unpredictable leader like Trump remains.

“The interaction between the two leaders is extremely important as the outcome will decide the direction in which bilateral ties will move,” says a senior Indian diplomat. “Since this will be their first meeting, there is a lot of expectations and speculations about the end result,” he added.

Scepticism agitates the mind of many commentators and str­ategic observers in India about Modi’s US visit (June25-26). “The end-June challenge for Modi is to ascertain the Trump commitment to bilateral ties,” says Com­modore (retd) C. Uday Bhaskar. “For instance, there is no US ambassador appointed in Delhi. Is this an indicator?” 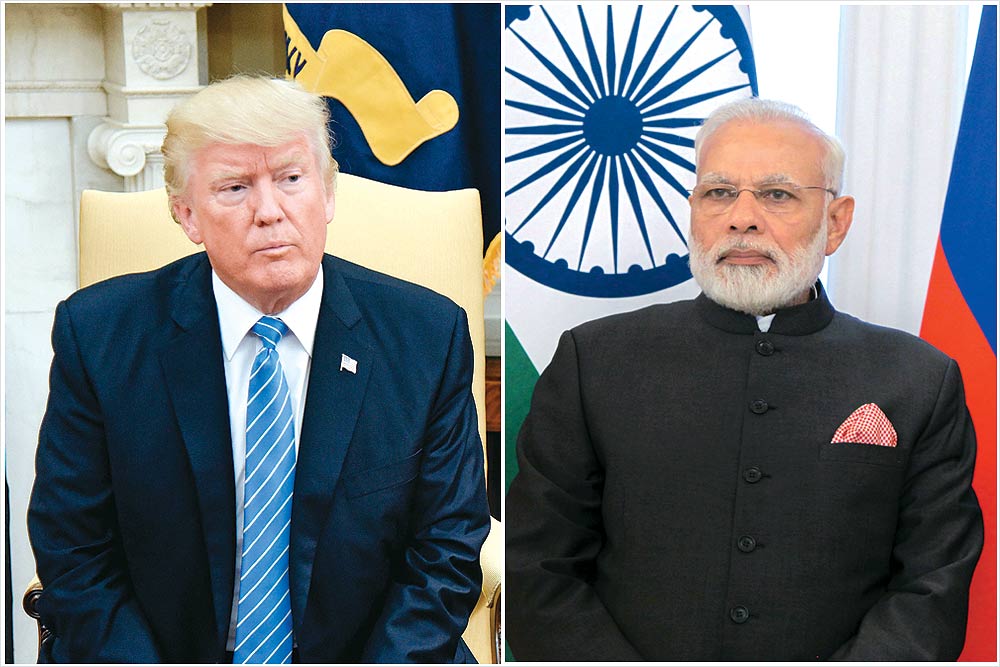 India and US can have closer maritime ties, and cooperation in other areas. But a note of caution has crept in due to the unpredictability of Trump’s reactions.

According to him, for India, the more recent Trump policy posturing has been less than favourable—the wild charges of India obtaining unfair and undue advantage vis-a-vis the climate deal and New Delhi’s firm rebuff to it is an unlovely episode. Then, Trump’s pro­mise to reduce immigrant workers and the number of H1B visas is of direct relevance to the Indian IT industry.  Fur­thermore, Modi’s ‘Make in India’ call has to be harmonised with Trump’s equally charged commitment to ‘buy American’ and ‘hire American’.

But others point out that while many more things may happen, especially coo­peration on the maritime domain and among the two navies, Trump’s unp­redictable nature and impetuous reactions have injected a bit of caution.

Indian foreign secretary S. Jaishankar and National Security Advisor Ajit Doval have in the past weeks held meetings with their counterparts and other senior officials in the Trump administration to find ways and means of taking the relationship forward. But a lot will depend on how Modi and Trump hit it off together for all this to bear fruit.

One area where focus of both the countries can get sharper is Afghanistan. “The Trump administration’s Afghan­istan policy review provides an opportunity to confront a central truth: No strategy, even with more troops, will succeed without reducing Pakistan’s support for the Afghan Taliban and the affiliated Haqqani network that is responsible for some of the deadliest attacks against the United States and its partners in Afghanistan,” wrote former American NSA Stephen J. Hadley in a recent NYT opinion piece.

There is growing feeling among many in the US security establishment that a review of America’s Afghan policy by Trump in assessing the direction of the 16-year old war, may lead Washington to take a much tougher line on Pakistan.

According to media reports, potential Trump administration responses being discussed include expanding US drone strikes, redirecting or withholding some aid to Pakistan and perhaps eventually downgrading Pakistan’s status as a major non-NATO ally.

But as Hadley observed in his article, “the trouble is that such ‘sticks’ are unl­ikely to change Pakistan’s behaviour, because its existential concerns are tied to broader regional priorities”. He arg­ued that “to get Pakistan to alter its app­roach in Afghanistan, the United States must understand and address Pakistan’s strategic concerns”.

Much of these concerns stem from India’s growing footprint in Afghanistan. This, ironically, had been increasing by the day, in proportion to the worsening strains in Afghan-Pakistan relations. Kabul had been blaming Islamabad, like India does, of encouraging cross-border terrorism inside Afghanistan. This has helped in opening more strategic space for New Delhi, though at the moment its engagement in Afghanistan is limited to the economic sphere and in supplying some defence equipment to the Afghan National Army. But the potential of India playing a larger role in the country, especially if it decides to actively help Kabul militarily, is something that is of serious concern to the Pakistani establishment.

Interestingly, this also opens the scope for the US playing a role in bringing India and Pakistan to the talks table. Trump had already expressed his desire to play the role of a mediator in forging peace. In the context of Afghanistan and the current situation in South Asia, he might yet again evince an interest, during talks with Modi, to initiate the revival of the stalled dialogue between the two hostile, nuclear-armed neighbours. It will certainly be interesting to see how the Indian PM will deal with the situation if such a proposal does come up from the US President.

Modi may well stress India’s commitment to peace with Pakistan and a seriousness in addressing all outstanding issues through dialogue. But he might well argue that talks cannot be possible unless Pakistan takes solid steps to curb terror groups operating from its soil. This may have Trump agreeing with Modi, but still, the measures the US president may adopt or suggest for a resumption of India-Pakistan talks are a matter of curiousity.

As Hadley suggests, only improved ties with India can reduce Pakistan’s apprehensions about Afghanistan. They also serve other long-term US interests: eliminating terror threats from the region, red­ucing the risk of nuclear war and sup­­porting a greater global role for India. To achieve this, says Hadley, the US should facilitate an India-Pakistan dialogue on the full range of economic and political iss­­ues, including  Afghanistan, without try­ing to stage-manage results. The US’ role should be contingent on Pakistan pre­­venting cross-border terror in India.

So far Trump’s reputation has been of a deal-maker. If he can strike a deal acceptable to both India and Pakistan, cooling temperatures in South Asia, he will have graduated to the elevated role of a peacemaker. Such a deal involves hard, diplomatic toil. Will Trump bend his back to make the effort?

The Autumn Of Thunder