"This Was A Genuine Encounter" 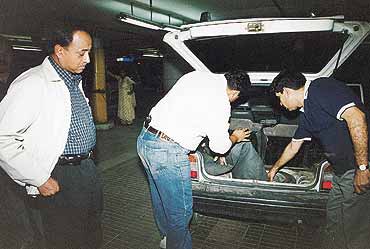 outlookindia.com
-0001-11-30T00:00:00+0553
Joint commissioner Neeraj Kumar, who oversees the functioning of the Special Cell of the Delhi Police, the unit responsible for the operation, gives Outlook the police version:

Does this negative publicity upset you considering the play it is getting in the media?
No, not at all. Despite all that is being said, this was a genuine encounter. There are other eyewitnesses to the incident who were present during the gun-battle. Why doesn't someone find out what they have to say? Instead, they want to believe the doctor.

Have your officers questioned Dr Krishna or met him? Is he in town or absconding?
No, we have not questioned him yet. We know that he is a resident of Greater Kailash. He is very much in the country and he has been provided security.

What about the NHRC notice?
We will provide details of the encounter and will submit the same within a week. There is nothing else to it.

What have the diaries found on the terrorists revealed?
There were a few entries which helped us establish their identity and from where they launched their operations. There are other details which we are still working on. I can't reveal them at this juncture.

Where did the two militants get the SIM card for their cell-phone?
They got the card from a dealer in south Delhi. It was given to them after identification papers from J&K were furnished. We are verifying if the papers are genuine.

Has the post-mortem been carried out?
We are awaiting word from the MEA which will decide on what should be the course of action.

'I Say One More Word, I'll Be Killed'