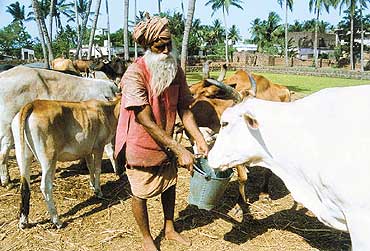 outlookindia.com
-0001-11-30T00:00:00+0553
An unlikely duo of a sant and a housewife has been doing for the temple city of Bhubaneshwar what the civic authorities have failed to do for years—'adopt' cows that are abandoned after they've outlived their usefulness. The goshala of Ramdas Baba, a nonagenarian Naga sadhu-turned-sant, and Tarangini Ma, a 65-year-old housewife who donated her property to support Baba's cause, does not believe in 'ridding' the city of these stray animals. Instead, love for the animals is their calling in life—providing food, shelter and medicines are only manifestations of this devotion.

No one is sure about the Baba's exact age or his antecedents. He himself does not remember anything about his hometown or his family—he speaks Hindi and claims to be from Ayodhya originally. The only thing he still remembers is leaving his home when only 12 to join the Naga sadhus. Since then he has been with them in the Himalayas, coming down once a year to visit different pilgrimages with his guru.

It was on one such trip to Puri during the rath yatra that he had a 'vision'. Says the Baba: "I saw myself surrounded by cows in a city of temples. Lord Jagannath ordered me to dedicate myself to their service. It was a divine call and I had no choice." That was 36 years ago and since then there has been no turning back. Ramdas Baba proceeded to Bhubaneshwar where he originally stayed in a Kali math near the old temple. Without any worldly possessions, he would walk around the city, herding stray cows, bringing them back with him to the math. Very soon he had nearly 30 cows with him—the first batch of cows was rescued from traders in Sundaripada who were taking them to an abattoir. But by this time he had already become famous in the city and many like-minded people came forward with help—Mahadev Saw Mill's owner Chandu Babu provided cow feed, Curaids Medicine shop owner Subhash Patra contributed medicines and other 'disciples' contributed in a number of different ways. Still, despite all the help, it was difficult to accommodate the growing number of his charges in the math. Soon, he occupied a plot of government land nearby.

It was during this time that Ramdas Baba had his second 'vision'—he was 'instructed' by the Lord to locate his 'true mother' who would help him in his mission. Thus began the search that ended in the prophetic meeting in a temple with Tarangini Ma. The baba took 'dikhya' from the mother. She proved a great benefactress. A half-acre stretch of land with a pond and orchard, which belonged to Tarangini Ma, was made available for the cows. Here the baba's cows could roam around freely—the two built a shelter for the animals, constructed troughs, and even a trolley was bought. Baba's disciples banded together to form the Jagannath Goseva Samiti to manage the goshala. Their efforts are bearing fruit now—an open-air shelter with stalls for 50 cows and a Radha-Krishna temple are two of the ambitious projects taken up by the goshala samiti. Also, it is planning to buy two mini trucks, a trolley and a trekker to transport the animals.

The samiti has already spent around Rs 3 lakh. Says Tarangini Ma: "We need more land and money. People dump their cows here but we do not have the wherewithal to look after all of them." But the Baba is averse to the idea of seeking help from politicians—twice his beloved cows were evicted after being promised free government land. Undaunted, the Baba continues in his mission. He wakes up everyday at three in the morning and cycles to Ekamra Kanan, 20 kilometres away, to fetch fodder for the cows. He returns by six to bathe and feed the cows himself. All the cows and bulls are named after gods and goddesses. Even a veterinarian is called to the goshala once a month. Baba believes that cows should not be used for commercial purposes or kept in servitude—they are never tethered or tied. Also, they are never milked.

The slim and erect Baba has considerable yogic powers. He eats a single meal a day and sleeps for an hour or two in the open except during rains. Often he does without food and chews bel leaves or raw papayas for sustenance. His long white beard and hair hang to his knees. His voice is clear and his eyes sharp. He has vast knowledge of the scriptures and palmistry. But he is opposed to priests, rituals and pomp. Says he: "We should not spend money on elaborate pujas and display. Worship of living beings is greater dharma than worshipping stone images." His address: Tarangini Kutir, Kedar Lane, Old Town, Bhubaneshwar.