'This Is The Limit, Mr Lakhanpal' 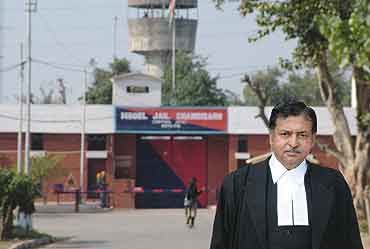 outlookindia.com
-0001-11-30T00:00:00+0553
Most do-gooders just go about doing what they have to and take the occasional word of praise or gratitude which comes their way as an encouragement. But what of Ranjan Lakhanpal, who, while doing his bit for the hapless, has encountered more of derisive comments from colleagues than applause? Some even call him anti-national. Yet, this human rights lawyer-activist has stoically been going about his task. His clients are people trapped in a no-man’s-land of sorts—the scores of Pakistanis lodged in Indian jails for minor offences like straying across the border, or jumping a city-specific visa to visit friends in other cities. "Many are illegally detained even after completion of their sentences because there is no one to pursue their cases," says Lakhanpal.

Lakhanpal takes up their cases free of cost, often without them even knowing about it. He says his reward is the smile on the faces of his clients when they go back home. In the last ten years, Lakhanpal has been instrumental in sending back about 200 Pakistani nationals. The last lot was six children between the ages of 10 and 17, who were released from Faridkot jail in Punjab last November.

Lakhanpal’s crusade began in 1995 when he came across an article which quoted one Fida Hussain lodged in Patiala jail, saying, "Ya khuda, apnon ko milne ki rehmat bakhsh (Dear Lord, I seek your kindness to enable me to meet my loved ones.)" Recalls Lakhanpal: "These words immediately struck a chord with me because I know the pain of not being allowed to meet my father who was jailed during the Emergency. He was a prominent Chandigarh lawyer who was punished for supporting Jayaprakash Narain. He died in jail and we, as children then, could do nothing to ease his suffering."

Lakhanpal filed a petition for the release of Fida Hussain and four others lodged in the Patiala jail. When the matter came up for hearing, the judge reportedly threw the case papers, saying, "This is the limit, Mr Lakhanpal. Now you are fighting for the human rights of Pakistanis too." Later, another bench took up the matter and after a two-year struggle, the five detenus were released. The high court directed that they be put on the Samjhauta Express and Lakhanpal was ordered to accompany them to the Wagah border to ensure that they were indeed sent back home. As per the orders of the court, they were also paid a compensation of Rs 25,000 plus each.

Ever since, Lakhanpal scans newspaper reports for information about such unfortunate prisoners and files petitions on their behalf. Over the years, he has become a beacon of hope for many. He frequently receives letters from Pakistanis in jail or their relatives from across the border seeking help. "Most of these cases involve innocent people who have strayed across the border. They are generally booked under the Passports Act and sometimes under the Official Secrets Act and given jail terms ranging three to six months. Even after that, they are not released until we file a case," says Lakhanpal.

Another case he took up was about a Pakistani caught by the Amritsar police. He had crossed the border 16 times just to watch Amitabh Bachchan films. The CBI interrogated him and realised he was innocent. After languishing in jail for four years, Lakhanpal got him released a few years ago. His colleagues mockingly refer to him as Mohammed Hussain. Lakhanpal’s response is, "I just do my bit for whatever it’s worth. I am now in touch with a human rights activist on the other side of the border and hopefully we will be able to do something for Indian nationals stuck in Pakistani jails."

The Fag End Of Fortune