This Is All India Radia

Our news media blanked it out, but the Internet forced the issue

If you depend on just the Times of India or Hindustan Times for your daily news fix, chances are you have missed the story that has put Indian journalism under its fiercest gaze ever. For it turns out that a majority of Indian journalism censors news about its own indiscretions. After Open and Outlook magazine published transcripts of conversations between Niira Radia and high-profile journalists, much of the mainstream media erased the coverage about the controversy. Even the few papers and TV stations that covered the issue in the days to follow did not name names and avoided the meat of the story, hiding behind the sophistry of the transcripts being “unauthenticated”.

Among the few that did, The New Indian Express and Mail Today (it did not name a former editor at the group though) picked up pieces of the conversations and the Deccan Herald carried an editorial on November 22. Among the vernacular papers, Sakshi and Andhra Jyoti in Andhra carried some excerpts. The Malayalam news channel Asianet picked up the story, but the English news channels were deafeningly quiet. CNN-IBN had a show on November 22 that claimed to “break the silence” but neither identified the people involved nor featured the transcripts; instead it pontificated on where to draw the line between lobbying and journalism. G. Sampath, deputy editor at Daily News & Analysis, Mumbai, wrote on his blog, “What is really scary is that, despite living in a ‘democracy’ that boasts of a ‘free press’, if you were dependent only on TV and the big newspapers for the biggest news developments of the day, you would never have known about the Niira Radia tapes, and the murky role of media as political power brokers.” 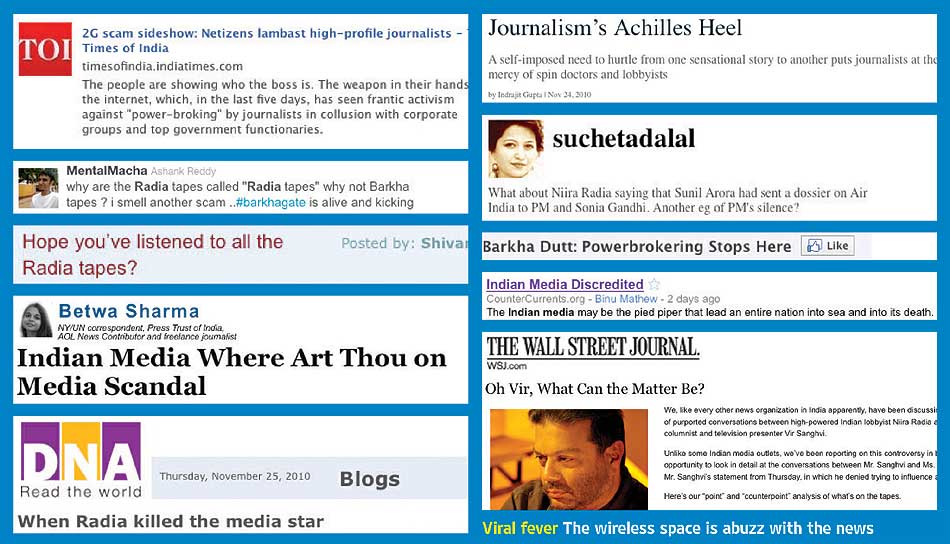 Sevanti Ninan of The Hoot, an online media watch website, latched on to this “great media blackout”. “The list of those who took no note is long and illustrious: The Indian Express, always quick off the mark on sensational disclosures. The Hindu, The Times of India, Hindustan Times, India Today, all those Hindi news channels,” Sevanti wrote. “Not a story that three prominent journalists were trying to help a lobbyist get A. Raja a ministerial berth in the second upa government.” Filling the gap, the site has opened a forum to debate the ethical transgressions in the Radia tapes.

Despite its blackout in print, the story has largely survived because of the tremendous interest among India’s netizens. The news was also carried prominently online in The Wall Street Journal, The Washington Post and The Huffington Post. Blogs are abuzz with indignant reactions to this censorship. The ‘Radia Tapes Controversy’ is now even a rapidly evolving and fairly detailed Wikipedia entry. YouTube throws up 35 matches for Radia and Barkha (Dutt), with one video (a transcript of one of the conversations) viewed close to 72,000 times. There are also numerous Facebook groups with discussions on how to “fix” the media. Google Barkha Dutt and the engine throws up Niira Radia as a prompt. And there’s no dearth of tweets about “Barkhagate”—there are several every minute asking for these journalists to resign and some even call for them to be jailed. For some, especially among the Right, the controversy has come as a boon, lending credence to their argument that the “pseudo-secular” English media has sold its soul.

Finally, when the ToI reported online on November 25 about how the internet had kept the story alive, there were bursts of self-congratulatory messages and tweets exchanged online. For Sunil Abraham, executive director, Centre for Internet and Society, the Radia tapes controversy illustrates the “tension and disconnect” that exists between the internet and traditional media. “This is unlike on 26/11 when there was a kind of synergy between the two in their coverage,” he says. Yet Net users deserve some credit for having made the debate interactive and infusing it with a much-needed spunk and pluralism. “For me, the most exciting thing about the ‘Barkhagate’ controversy is not the internet’s influence on the attention economy,” adds Abraham. “It’s actually been its crowd-sourcing ability to bring together the intelligence of many amateurs from across the world and to put their insights into one collective analysis of the controversy.” While the Net, with just about 20 million users, is yet to rival the traditional media’s hold on India, the latter undoubtedly have a force it must now reckon with.

Past Isn’t Perfect. But.