Things No One Can See

Rajasthan is a quieter cousin of Gujarat. It too has a model to flaunt, to paper over reality. 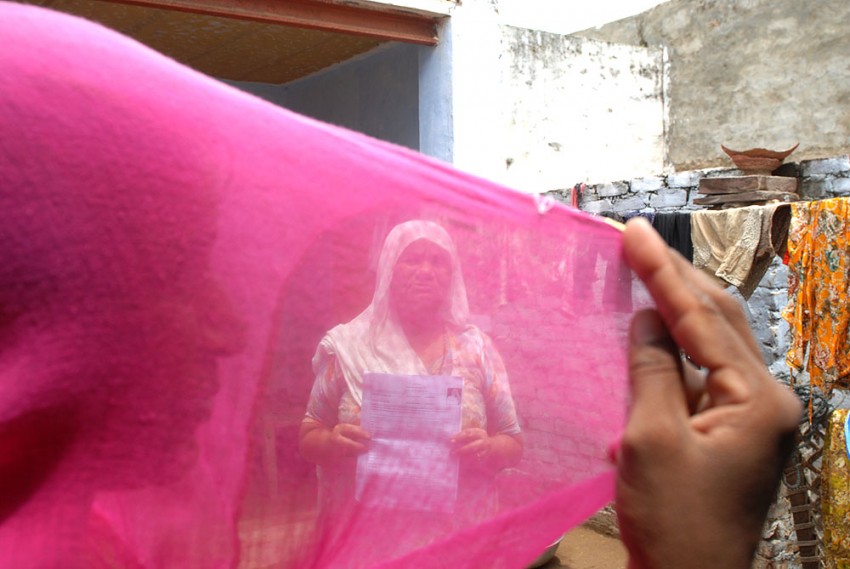 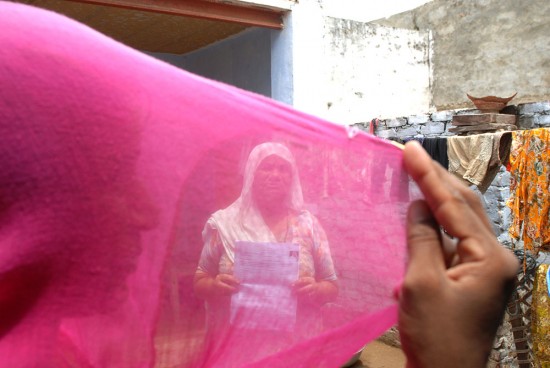 Ear To The Ground

Rajasthan, without much ado, is inching closer to hosting a crucial assembly election later this year. A heats that will be played by the same rules as the final of 2014. The import goes beyond its 25 Lok Sabha seats, of which the Congress has 20. This neighbour of Gujarat is a bellwether state of sorts, claiming a model of its own, a vitally important one for the UPA. It’s like a welfare lab, where flagship schemes of the Congress get a first taste of life. Its main rival is meeting this with a spunk built around its trumpcard. “The magic mantra is Modi,” says the BJP’s Gulabchand Kat­aria. He makes light of caste-based threats like that rep­resented by Kirodi Lal Meena. “As soon as he is named as PM candidate, a Modi wave will sweep the country. Communal-caste divides will be bridged.”

Chief minister Ashok Gehlot is unfa­zed. Rajasthan won’t buy into the Modi mark­eting, he says. His optimism stems from the welfare schemes that have been fairly rolling out of the mint. Hist­ory should give him pause: the state tends to vote against incumbents. Even so, the change they have brought is visible, even in tribal-dominated dis­tricts like Bhil­wada. “I can now buy things on credit,” says Ugam Kanwar, a Rajput widow in Umari village. “Shopkeepers know I’ll get my pension and repay them.” She can’t stop grinning. The Rs 500 she gets monthly is not much but, she says, it has made her children and daughters-in-law treat her better. About a thousand old men and women in her village of 2,000 households get such pensions by cheque. Kishen Singh Chandawat, who holds a BPL card, received Rs 45,000 for building a modest house. He says the state finally seems to have acknowledged the presence of this remote village and extended a helping hand to its poor and aged.

Gehlot, till recently seen as a non-performer, is suddenly being hailed by ben­­e­ficiaries as a deliverer. Traditional BJP voters grudgingly admit, “kaam to kiya hai, par chaar saal tak kuch nahin” (he has delivered, but had done nothing for four years). One section of the Jaipur metro is set to run soon, and there are many things he’s put on track—an IIT, an IIM, an AIIMS have been sanctioned for the state. Power supply has imp­roved and so have the roads; the urban and rural poor have benefited from the government’s housing schemes. The Service Deli­very Act, 2011, and the Right to Hearing Act, 2012, are new outreach experiments launched by Gehlot to ens­ure that people get what the government has promised them. Other states could replicate them as well; Rajasthan was always the laboratory for the UPA’s flagship schemes.

But what Gehlot hopes will be the game-changer and help the ruling Congress overcome anti-incumbency are his welfare schemes. The old age pension is believed to be reaching 2.5 million people; every BPL family gets foodgrain at Rs 1 per kilo, besides Rs 1,500 for blankets and saris. People are also entitled to free medical check-ups and medicine.

Of course, it’s not that there are no glitches. Dr Naresh Verma is in charge of the Community Health Centre at Kar­eda, in Bhilwada. “Within a year, the number of outpatients has gone from 30,000 to 48,000. Every month, 120 children are delivered in the hospital,” he says. But the centre doesn’t have a single gynaecologist or surgeon. Grudgingly, Verma admits to a staff shortage. Some of the medicine supplied to the centre is returned, for there are no doctors to prescribe them. But, by and large, the system works. At the Amrit Kaur Government Hospital in Beawar, a mid-size trading town in Ajmer district, there’s a long queue for free medicine, a facility that has brought Rajasthan’s healthcare much acclaim. The medical stores nearby, in a reversal from what’s seen in other states, say sales have been hit hard. “Down 30 per cent,” says Prakash Jain, who owns one. 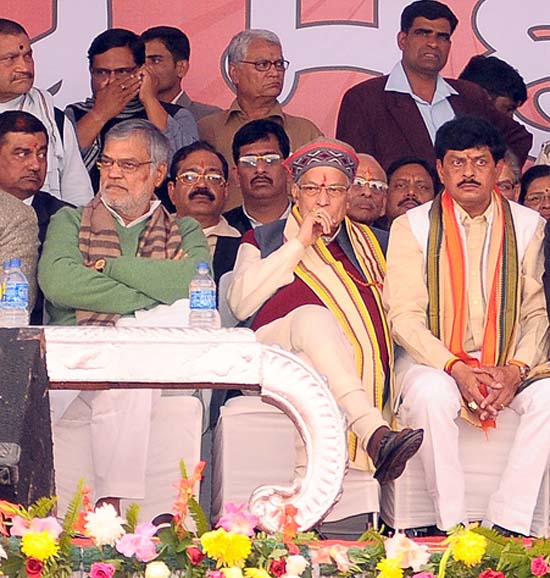 Will all this help Gehlot win? Freebies don’t win elections, says Ghanshyam Tiwari, a BJP leader and RSS hardliner. “Last-minute announcements of social welfare schemes failed to bail out even the BJP in Karnataka or, for that matter, Mayawati in UP, the DMK in Tamil Nadu or Chandrababu Naidu in Andhra Pradesh earlier,” he says. But the chief minister, aware of that, says, “But I did a far better job in my first term as chief minister. Why did we lose?”

Unable to publicly oppose these wel­fare schemes, the BJP has focused on corruption. It has pled­ged to highlight 100 big scams in the present government, but has struggled to identify a dozen or so cases. And while the party is sanguine of winning Raja­sthan back, in keeping with the electoral trend in the state which has swung between the two parties in the past, the race appears a little too close now for comfort.

The Congress, which had fallen short of a majority in 2008 and had to cobble one up by inducting six BSP MLAs, does seem to have gained a fighting chance of retaining Rajasthan, if the mood of the people and political leaders is a pointer. “I see a neck-to-neck fight,” says Gujjar leader Kirori Lal Bainsla, with neither party mustering a majority.

Indeed, one variable is how caste-led factions play their hand. Bainsla, who led the Gujjar protests to gain ST status, is a disillusioned man and is mulling floating a party before elections. He may not be able to win many seats but could potentially damage both the Congress and the BJP in several constituencies. Another pole is that of prominent ST leader Kirodi Lal Meena, an independent MP, who is busy canvassing support for his Rashtriya Janata Party and is intent on quelling the BJP. “Vas­un­d­hararaje was the most corrupt CM in the history of Rajasthan, why has Gehlot not initiated an inquiry aga­i­nst her?” asks Meena, insinuating that the two parties may have rea­c­hed a secret understanding. Inter­e­stingly, he also presents the unlikely prospect of a Meena-Gujjar alliance before or after elections. Jats, who constitute the largest bloc, play a big role in government formation. Jat Mahasabha president Rajaram Meel says: “We ensured the BJP’s win in 1999, 2003 and 2004 but they bet­r­ayed us. We’ve given two chances to the Con­g­ress since, we’re yet to receive a positive response.” A mahapanchayat next month could tilt the choice.

For the Congress, the talk of a positive wave—fantasy or reality—had better materialise if it wants to avoid seeing small groups chip away at its voteshare. Besides caste blocs, you also have parties—the BSP, which had won six seats in the last election, the SP, and the CPI(M), which has three seats in the assembly—that will eat into its votebank. The CM also appears to be fighting a lone battle. Many sitting MLAs are unpopular. Besides, mps, central ministers and pcc members from the state seem to be least interested in promoting Gehlot’s flagship achievements.

A spot of internal rancour has always been a part of the Vasu­n­dhararaje story too. Unpopular in a few wings of her own party, she is unable to recreate the craze that saw her winning 120 seats for the BJP in 2003; her ‘suraaj sankalp yatra’ may have done little to repair the damage, despite impressive turnouts. Put it to her aloof style of functioning or patrician roots, the ingredients needed for a disconnect with the ranks may have always been there. RSS-BJP cadres did indeed have a tough time during her last stint, and reciprocated in kind. To counter this, she is trying to get Nitin Gadkari, an RSS man and former party chief with whom she has a good equation, put in charge of the election campaign. There may be a small element of gamesmanship here. For the gen­eral mood is to call in Modi and settle the issue. Gadkari and Modi? No wonder the party hasn’t decided.