They Who Belong To The Earth 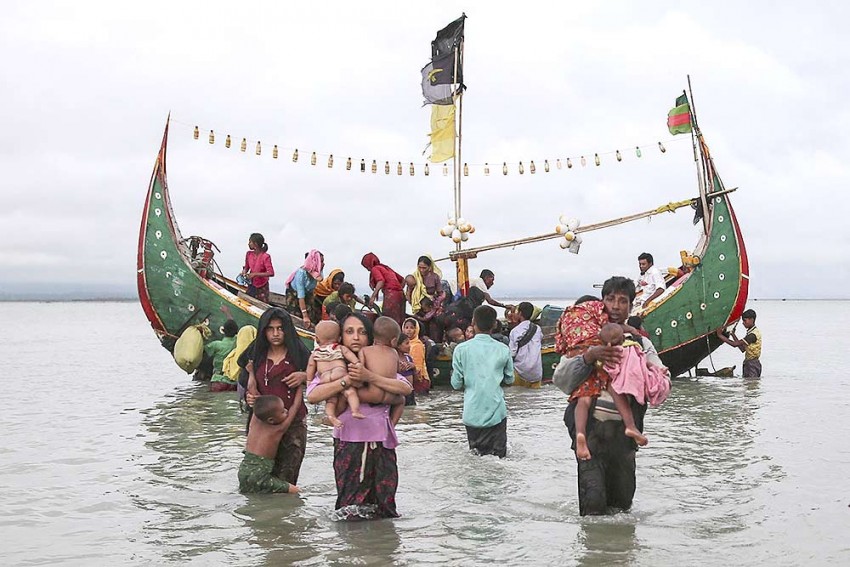 Swept By Hate
Rohingya Muslims flee to Bangladesh by sea
Photograph by Getty Images
Gautam Mukhopadhaya September 14, 2017 00:00 IST They Who Belong To The Earth 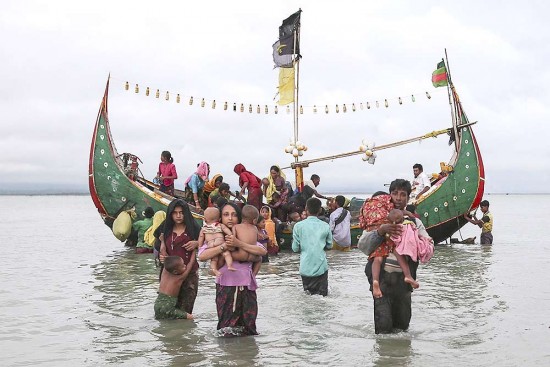 It has been over two weeks since the northern Maungdaw district of Myanmar’s Rakhine state has been convulsed by one of its worst-ever bouts of violence in decades over the so-called ‘Rohi­ngyas’ or ‘Bengalis’. Unlike in the past, when cycles of violence were sparked by communal incidents, this time it was triggered on August 25 by coordinated attacks on some 30 border posts and an army base by the Arakan Rohingya Salvation Army (ARSA), now designated by Myanmar as a “terrorist” organisation. This followed a similar attack on three border posts when ARSA first made its appearance as a still shadowy Harakah al Yaqin (HaY) in October 2016 and the killing of an army officer in November.

The human toll has been heart-rending and widely documented: hundreds, overwhelmingly Rohingyas, but also some border police, officials, Rakhine Buddhists and minorities, including Hindus, killed; perhaps up to three lakh Rohingyas displaced across the Naf river into Bangladesh and thousands of Buddhists and minorities within Rakhine; and widespread looting of villages. Charges of ethnic cleansing and genocide fill the air. Humanitarian access to the area is severely limited; the media, unwelcome.

The events are an ­escalation of a ­festering issue that has seen periodic outbursts since 1948.

The events represent a qualitative escalation of a long-festering issue that has seen periodic outbursts of violence since a Mujahideen rebellion in 1948, but most recently in June-October 2012, when over 160 were killed, lakhs displaced, and some 1,40,000, mos­tly Rohingyas, confined to IDP camps since then. Fre­quent cycles of violence, typically kindled by cri­minal incidents taking a communal turn, may have been prevented, but social relations have been aggravated by disproportionate force and the weight of the security forces acting on the side of the Rakhine. Besides, loss of livelihoods and the closure of illegal migration routes after the 2015 boat crisis bred gre­ater despair, anger, militancy and radicalisation.

With October 2016 and August 2017, the character of the violence in Rakhine appears to have changed. Most recent incidents have been incited and organised by radicalised Rohingyas based abroad with the calculated intention of heightening international attention on the issue. In this they have succeeded dramatically. It also appears that things may be taking an externally inspired and assisted militant, INS­urgent and possibly terrorist direction. It’s now fairly established that ARSA and HaY have been largely organised, funded and trained by expatriate Rohingya elements in Saudi Arabia, Pakistan and elsewhere associated with the Taliban and fundamentalist Bangladeshi outfits and may have links with transnational extremist organisations—and their arrival has eclipsed the older, activist Rohingya Solidarity Organisation (RSO). The leader of ARSA is a Saudi-based Pakistani, Ata Ullah. The harsh crackdown by security forces has been mainly reactive.

At one level, the predicament of the Rohingyas is a simple moral issue: a poor, stateless, discriminated people persecuted on racial/communal grounds by a harsh majoritarian military backed by a form of religious nationalism. The proximate context for Rohingya militancy undoubtedly lies in the structural discrimination, denial of human rights and statelessness of a very poor people caught in a legal no-man’s land, aggravated by the complete marginalisation, lack of access to basic services, hopelessness and despair, especially since the events of 2012-13.

Yet, the root causes are more complex. They lie as much in history (pre-colonial, colonial and Partition), politics (British, Burmese, Islamist) and the status and treatment of non-Buddhist minorities in Myanmar as a whole. Few in India appreciate the impact of the huge migration from India under British rule on the Myanmar psyche, one aspect of which was loss of land to wealthy Indians (prominently, Chettiar money-lenders from Tamil Nadu) and their control over the economy. It’s this that led to the nationalisation of the Burmese economy under Gen Ne Win and the xenophobic, insular turn of Burma under military rule which drove out those Indians who could migrate.

The listing of the 135 ­national “races” that apparently make up Myanmar has ­excluded Rohingya.

These fears also lie behind the meticulous listing of the 135 national “races” that make up the Myanmar identity (that do not include the Rohingya), and the 1982 Citizenship Act that puts all ‘settlers’, including all people of Indian origin in Myanmar, at a distinct disadvantage. The largest number of them are poor Tamils but also poor ‘Bengalis’ from erstwhile Bengal and Hindi speakers from Bihar and UP, all collectively referred to somewhat derogatively as ‘kalar’ (not a reference to skin colour, but to their provenance outside Myanmar).

Registration certificates of varying status formalised the ‘outsider’ status, a marker of institutionalised discrimination. Most Hindus of Indian origin have over the years somewhat improved their position by keeping a low profile, identifying with the Buddhist majority, and accepting the protection of the Buddhist Sangha, though their integration to the mainstream is still far from complete.

This has not been the case with the Muslims, where a strident strain of religious nationalism amongst the Buddhist Bamar majority and growth of Islamic symbolism among the Muslims have widened the gulf. This has been aggravated by common tropes of faster reproduction, migration, over-population and ‘takeover’ by Muslims resulting in a siege mentality amongst many Myanmar Buddhists, who see their religion under threat from Islam. No doubt some of this is a form of paranoia; yet it feeds a widespread anti-Muslim sentiment that has eclipsed the reality of peaceful coexistence of mosques and pagodas side by side, intermarriages, and a largely passive, moderate and integrated Burmese-speaking Muslim population countrywide.

The case of the Rohingyas is special—drawing from all the above, but distinct. It revolves around the issue of who they are, and whether they are indigenous to Rakhine state. Much of this is shrouded in claims and counter claims, and needs impartial research. To ­articulate Rohingyas, Bangladeshis and most of the world, it’s self-evident that they are an indigenous ethnic group, and should therefore be given citizenship on the basis of self-definition.

The Rakhine and Myanmarese in general fiercely contest this. They maintain they are not original ­inhabitants but Bengali settlers who came in the wake of the British. During World War II, they were on opposite sides. That they mostly live in separate villages and do not speak Burmese only confirms their convictions.

The truth, as often, probably lies in ­between. The best that can be said is that ‘Rohaing’, from which ‘Rohingya’ is der­ived, is a dialect of Bengali spoken on both sides of the Naf river and up to Mayu river in Rakhine. The community is now being given the status of a distinct ethnic group under the influence of identity politics going back to the time of partition and Myanmar’s independence when the Mujahideen wanted to join East Pakistan (which was denied). It is now sustained by Rohingya expatriates in Saudi Arabia and Pakistan and poorly informed world opinion. 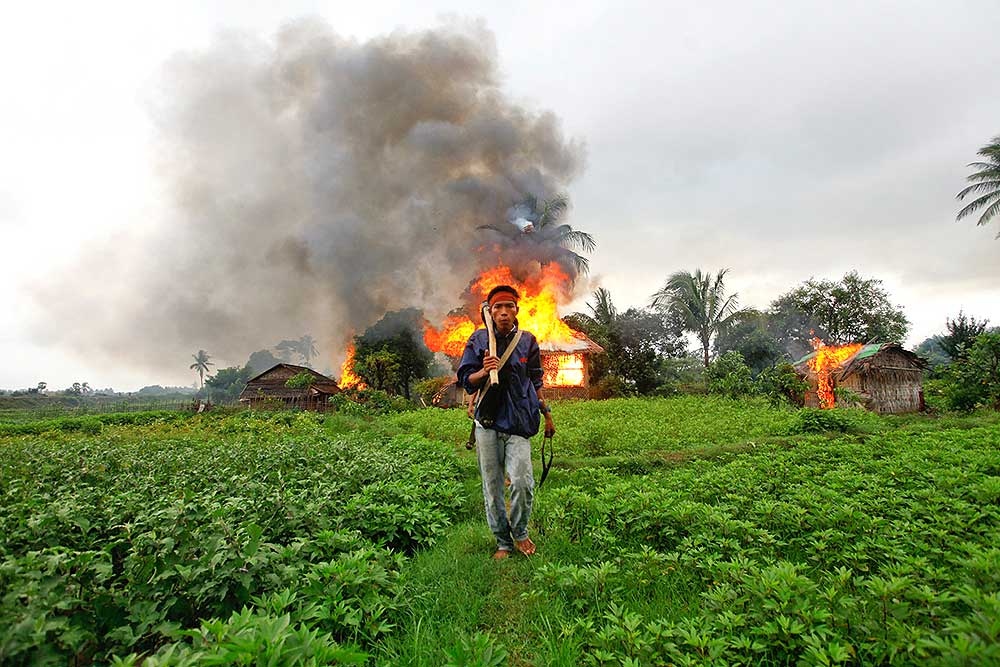 Whether all those who claim to be Rohingya today are descendants of these original Rohaing speakers, or what proportion of them are later illegal migrants, are also points that require objective study. Ban­gladesh denies it, with arguments in support. To Myanmar, Rohingya self-definition appears self-­serving. Meanwhile, most poor Rohingyas in northern Rakhine, trying to eke out a meagre living, may not care whether they are ‘Rohingya’ or ‘Bengali’ provided they can be given citizenship rights. They are pawns in a larger, deadly game.

Most poor Rohingyas may not care about their ­identity, ­provided they are given citizenship.

The issue has now floated to the top of the international human rights agenda and has reached the UN Security Council. It has also taken a regional dimension, resonating in South Asia, Southeast Asia and the Islamic world.  Local and international opinion stands polarised along national, religious and human rights lines. Key Muslim majority countries, including in the ASEAN, have issued strong statements against the security crackdown. India has taken a position squarely on the side of Myanmar on what appears to be political grounds, though it has moderated it somewhat lately taking into account regional opinion. The Bangladesh government is caught bet­ween its desire to be a good neighbour and share distaste for Islamic extremism on the one hand, and public opinion and solidarity with the hapless Rohingya on the other. China has taken a sympathetic and balanced position and is shielding Myanmar in the UN Security Council.

While the Myanmar government and Daw Aung San Suu Kyi personally have been pilloried around the world, the Myanmarese overwhelmingly back their government. Social media opinion on all sides has been on overdrive and often ­extreme, giving the conflict the character of a two-dimensional ­battle without a middle ground. High emotions, lack of knowledge, fie­r­cely contested ‘facts’, absence of per-s­pective, hidden agendas, media bla­ck­outs, propaganda, prejudice, and the fog and noise of real-time violence colour most reporting and cloud perceptions, and have ­seemingly overtaken a realistic possibility of truth, objectivity, balance and compromise.

Under the circumstances, it is difficult to see hopes for an early solution. The mixed Myanmar-International Kofi Annan Com­mission, appointed by Suu Kyi to come up with constructive proposals to bring about harmony between the Rakhine and Rohingya, has come up with the best possible recommendations, including a relook at the 1982 Citizenship Law, but is probably a casualty of the overall polarisation.

The Rohingya issue has so far been treated almost entirely as a domestic human rights and humanitarian issue involving only Myanmar. This is no doubt the most pressing issue and focus, but it’s not enough. One key issue missing from all discussions is migration. This would bring in Bangladesh as a key party, but also, in due course, other countries that have been affected, especially in the ASEAN, the only other forum where discussion on the issue could be propitious. Past efforts to deal with illegal outward emigration have been partial and unsuccessful. But the issue of inward migration has been systematically brushed under the carpet. Any serious effort to deal with the issue would have to bring in this theme, however unpalatable it may be to Bangladesh. India is not necessarily the best qualified to play a role in this.

(The author is a former Indian ambassador to Myanmar)