“They Can Only Kill Innocents, Not Us”

The interview with Maoist insurgents is a tad unreal, when it does materialise in the middle of the dense jungles of Dandakaranya... 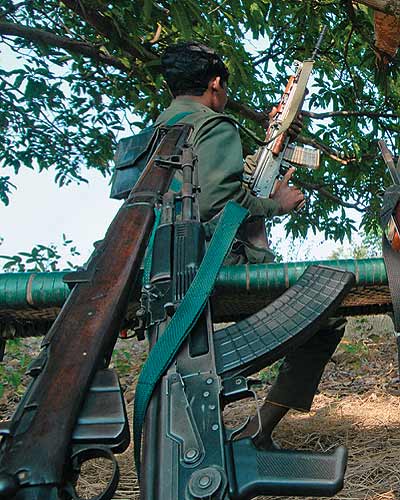 The interview with Maoist insurgents is a tad unreal, when it does materialise in the middle of the dense jungles of Dandakaranya. While the top three—Vinod, Deva (members of the Durba divisional committee) and area commander Badru—sit down, the other five accompanying them vanish to keep vigil. Badru, with some help from the other two, takes the questions in Hindi. Excerpts:

The government’s called you for talks, if you abjure violence....

We don’t want a dialogue with the government as it can’t solve the real problems of the people. Manmohan Singh and Chidambaram want to bring MNCs here and hand over the land to them. We want to establish a Communist state, something the government totally disagrees with. So where is the meeting ground?

Haven’t the Maoists entered the democratic process in Nepal?

They have taken the wrong path. Earlier, they had the same philosophy as ours. They made so many sacrifices. What they’re doing now will not end the real problems of the people.

If the government withdraws its forces, would you consider doing the same?

Whether they stay or withdraw, we won’t lay down our weapons.

Neither you nor the government seems to want to end the war. But it’s the tribals who are caught in the crossfire, who are dying...

Is there no way other than the gun to achieve your goal?

No, power flows from the barrel of a gun. We have to protect the poor from the forces. Without guns, there’s no rajsatta.

How much pressure has Operation Greenhunt placed on you?

The operation doesn’t bother those of us who carry weapons, but it’s a problem for the people. The Salwa Judum has burnt homes; the SPOs are even more dangerous. In our Durba area, they have not killed a single vardidhari (armed) Maoist since Op Greenhunt started three months ago. But the government forces have killed innocent unarmed people and declared them as Naxalites. They have declared Deva dead, but here he is, sitting next to me.

If they had killed real Naxalites, we wouldn’t have had problems: that’s our job. Chidambaram, (CM) Raman Singh and (Congress leader) Mahendra Karma had said Op Greenhunt would help the people. Don’t run away, they said, stay in your homes. But they have only picked up people, looted them and beaten them up to ask them where the Naxalites are hiding. People trust our party because we tell the truth. Government operations can kill innocents but not our struggle. More people will take up guns.

What is more important for you, tribal welfare or political power?

Political power, because we’re fighting for all the toiling masses.

What have you done for the tribals?

Why have you destroyed so many ashram schools?

We have destroyed some ashram schools only because the CRPF have been building their camps there.

Would you oppose the entry of the civil administration?

Do you differentiate between the BJP and the Congress?

Whether it is the BJP or the Congress, they both want MNCs to come here and displace the people.