'They call me Rasputin'

The self-professed lord of the Scindia fortune, Sardar Angre is a courtier of many contrasts 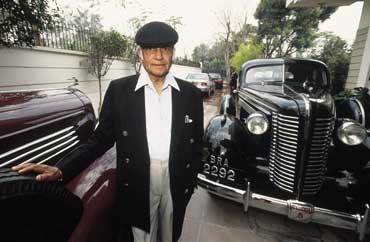 outlookindia.com
-0001-11-30T00:00:00+0553
Sardar Sambhajirao Angre, the man who is famously known for his close relationship with the late Rajmata Vijayaraje Scindia, has this chilling anecdote to narrate. It's about Maratha queen Ahilyabai Holkar, a brave and generous soul who loved her people. She established a custom of distributing charity among her subjects every morning. But one terrible day, she discovered that her only son, still a boy, was putting poisonous scorpions inside the shoes of those who came to seek her benevolence. An angry Ahilyabai ordered her son's execution—he was crushed to death under the feet of an elephant—and made Yashwant Rao Holkar, her general, the next maharaja.

A chilling episode indeed—a mother putting her only child to death. But Angre sees Ahilyabai as a heroine—just like Vijayaraje, whose will was recently made public by him, her private secretary and four decade-long confidant. The will virtually disinherits her son, Congress leader Madhavrao Scindia, and leaves much of the Rajmata's fortune under a trust's control. Angre is both a trustee and the executor of the will. Even the three daughters, including Union minister Vasundhara Raje, don't really get much by way of disposable assets from the 1985 will. Now there is talk of a second will.

Who is this man hated by the royal children? A Machiavellian 'uncle' in the Gwalior court trying to usurp their inheritance? Meet Angre and he comes across as a dapper old man who looks young for his 81 years and seems to see nothing wrong in venting his contempt for Madhavrao. "Did I ask Madhavrao to disappoint his mother? He alone is responsible for what's happened today."

Angre is a courtier of many contrasts. He spews venom on the Rajmata's only son, but refers to him as the maharaja—"since I respect tradition and he is the maharaja, I must address him as such". Dressed in tweeds, Sardar Angre is clearly enjoying his moment in the sun. He brushes aside all innuendo about his relationship with Vijayaraje: "Yes I know what people insinuate. They call me Rasputin, who controlled the Rajmata. That I am the cause of the bitter acrimony with her son. Madhavrao has spread these stories because I stood by his mother while he ran away."

Madhavrao is accused of running away to Nepal during the Emergency. He wanted his mother and sisters to follow him. But Angre prevailed on the Rajmata to stay put in India and fight the dictatorship with courage in the Scindia tradition. Finally, when she surrendered and was serving her term in jail, her son joined the Congress. This irked the Rajmata and brought her even closer to Angre.

The Angres have served the Scindias for eight generations as prime ministers or commanders-in-chief. In fact, in her autobiography, Maharani, the Rajmata recalls: "Sambhajirao came to my husband to offer his services in the spirit of the historical ties between our families. From that day on, he became my husband's most trusted confidant. He was, after all, from the same fold, brought up on the same orthodoxies. I too soon began to call him by his nickname "Bal" while the children by instinct began calling him uncle."

It was after Jivajirao's death (Madhavrao was just 16 then) that Angre became truly indispensable to the Rajmata. A long-time rss member, Angre carefully crafted the Rajmata's career in the bjp. Recalls a bjp old-timer from MP: "He was the strong man who took care of the widowed Rajmata.She was this frail woman and he a macho man who always carried a gun and had the reputation of a mighty hunter. He was always by her side during her election campaigns. They were very, very close, virtually inseparable."

The Guardian quotes a family source: "He was much more than a secretary. I would not go so far as to talk about a physical relationship but there is no doubt he had great influence over her." So much influence that he could turn the Rajmata against her son? A close friend says: "I told her that you should make up with Madhavrao. After all, you are called Rajmata (queen mother) because you are the mother of your son, the maharaja." The Rajmata further admits that Madhavrao believed "that it was Bal's (Angre) influence over me which gave my political beliefs their rigidity. That is why he has taken special trouble to subject Bal to a host of major harassments such as getting his staff to file criminal cases."

Instead of seeing this as the act of a son anxious to curb an outsider's influence over his mother, Vijayaraje only adds it to her litany of complaints against Madhavrao. But for Angre she has only praise: "He had, since my husband's death, made himself indispensable. There was a close affinity between my political beliefs and his, as well as in our concern for the Hindu faith. He'd become a financial advisor of unquestionable integrity, trusted confidant, guide and trouble-shooter. I don't believe his position can have many parallels among non-feudal families, no decision is made without him."

Seated on a sofa in his plush Delhi farmhouse, Angre likes to think that he's the lord of all that he surveys. He's annoyed at the very mention of a second will written as late as February 1999: "Where is this will? Was it written when the Rajmata was ill and weak? Was she mentally aware?" Highly placed sources have informed Outlook that there is indeed a second, typewritten will, in the possession of Vasundhara Raje. This will too does not give anything to Madhavrao, as there was a mutual division of the Scindia properties in 1980 between the mother and son. It bequeaths the bulk of the Rajmata's fortune to her daughters.

Madhavrao is, however, challenging all wills on the principle of promigeniture, where the eldest son of a royal family inherits everything. But well-placed sources say this argument will not work, as in an earlier tax case Madhavrao signed an affidavit where he opposes the principle of promigeniture. To avoid litigation, the sisters are believed to be working out a formula whereby even Madhavrao gets a share. Besides, the siblings are united in their hatred of Angre.

Angre is getting ready for a long-drawn battle. "I'm no pauper myself—I've been fighting one case linked to my estate in Dewas for 50 years." Besides his Delhi house, Angre owns another in Gwalior, a flat in Mumbai, a mango plantation, a stud farm and a huge ancestral property near Indore. "We had an estate of 250 villages—almost two tehsils," he brags. "I don't need to grab anyone else's heritage. But I'll fight for the Rajmata's trust—it's her gift to the people of India." Clearly, it's the royal retainer in a Battle Royale.