'They Call Me !ncredible Ms Soni

Minister of tourism on India's success at the Berlin tourism trade fair and the road ahead for the growth of tourism in India. 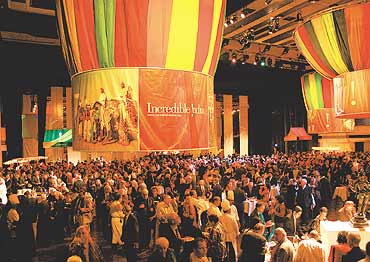 outlookindia.com
-0001-11-30T00:00:00+0553
India took centrestage at this year's International Tourism Bourse (ITB) in Berlin, the world's largest tourism trade fair. Minister of tourism Ambika Soni, who personally oversaw the campaign, spoke to Raghu Karnad about India's success and the road ahead for the growth of tourism in India. Excerpts:

First of all, congratulations on India's role as partner at the ITB—by all accounts it was a huge success.

It was incredible—India had quite a presence. In fact, it seemed at the cost of everybody else. Those who had put up stalls from other countries left their stalls and came to buy vacations at the Indian pavilion. Our presence was beautifully articulated—we had a mehendiwali, live demonstrations of wellness tourism, Kathakali dancers, stone-carvers, an astrologer, the West Bengal tourism minister arranged several mock weddings and distributed red saris.

It sounds almost on the scale of Indira Gandhi's Festivals of India.

That's right, it almost was. There were these huge Incredible India blowups around Berlin's main roundabout, images covering three storeys of a multistorey building!

Our inaugural ceremony broke the ITB tradition. It was a full two-hour presentation, ending with Ritu Kumar's fashion show. We'd taken 65 artistes from different parts of the country for the cultural show—it was a fusion. We'd put it up for the Rashtrapati on the eve of Republic Day. He found it so good that the following night, at a dinner at Rashtrapati Bhavan, I heard him talking about it to other dignitaries. The (Lok Sabha) Speaker rang me up and said, the Commonwealth Parliamentary Union is having its meeting here and the Rashtrapati says you put up a very good cultural programme, I want the same. Then I had some CII and Infosys representatives come to see me a few days ago and they wanted us to put up something at the time of the UN General Assembly session—(laughs) but I'm not really carving out a role of event manager for ourselves.

What was the secret to organising such a good show?

We really furthered what we've been drumming our drums about—public-private partnership. The private sector, states and the ministry coordinated and worked as a team.

Were some of the arrangements outsourced to private consultants?

In the sense, the food was put together by these hotels who worked with us. It was very interactive but no, it wasn't outsourced. We kept putting in ideas, we kept looking and relooking at plans. Whatever was done was coordinated by the ministry of tourism and this I don't say with the idea of trying to accrue all the credit to ourselves. But it's given us great confidence that if we all work together, big things can come out of it.

This !ncredible India campaign seems to have been very successful and has had great retention in people's minds.

That was started a few years ago, but a lot has gone into it, and it's almost become a logo. You know, they'll say "the Incredible Ms Soni" instead of saying "honourable Ms Soni"—what I mean is, it has gelled. We've thought of advertising in French, in German, because they're a good market, but somehow, translated as L'Inde Incroyable, it doesn't mean the same thing. Atulya Bharat is great, but it's still not 'Incredible India'.

Indian tourism officials have been talking about the need for India to be rebranded to attract tourists. How does 'brand India' need to change?

I don't see it as branding. Even among people who haven't been here—I'm not talking about odd people who still say India is a land of snake-charmers, that's passe now, that's gone. We don't have to brand India differently, people are witnessing an evolution. Most of our (promotional) films speak of our rich heritage, and that's what we have. But we do have snake-charmers too!

Inbound tourism grew by 13 per cent between '05-06, but India still has a long way to go to get its fair share of world tourism.

People say—I say it myself—you're a country of a billion, what's 4.4 million tourists? Mauritius has a population of 3 million and gets 7 million tourists. But it's not the same thing. The country's priorities over the last 60 years have been different—we were all geared to our five-year plans to create a level playing field in education, health, employment, empowerment—who thought of tourism? Tourism and culture were what we felt we already had. But you also have to have your museums world-class, you have to create an infrastructure around cultural destinations.

Do you see a role for the private sector in developing infrastructure? For instance, managing heritage sites?

We're trying to get people involved in building the infrastructure. ITB Berlin showed even the private sector what potential there is, for hotels and convention centres. Mr Chidambaram has extended incentives for building hotels in only Delhi and NCR at the moment, but I want it across the board. Unless the government provides some kind of incentives, people are not going to build three- or four-star hotels, and then visitors can't pay $500 a night. People are bypassing India just because there's no hotel accommodation.

Under the overall supervision of the ASI, monuments can be privately done. We have a national cultural fund for which the government has given tax incentives. Say I happen to be Birla, and I want to give Rs 1 crore for the Jama Masjid, I put my Rs 1 crore in a fund, I get the tax rebate and I can choose my own people to do the work, provided the ASI has tested them. Then the ASI makes the payment from the Rs 1 crore in the fund.

ONGC has given us Rs 10 crore for Hampi! Mrs Narayana Murthy rang me up and she wants to do one of the mandirs in Hampi, because I want Hampi to come up in a big way in the South. It's beautiful but there's no hotel there.

From the day I joined the ministry, I've felt we must promote domestic tourism. We're giving great emphasis to budget accommodation, two- and three-star hotels for domestic tourists and budget travellers, because Indian tourism is all-inclusive. Anyway, we can't have an overkill in terms of international campaigns—first I want the set-up here to be good. The challenge is to get repeat visits. People should come here one time and then come back.

The media and the ministry are talking of tourism entirely in terms of its rate of growth, without discussing its social and ecological costs. Don't we need to evaluate the impact of the industry in development-related terms as well?

There's no question—it has to be an integral part of all our initiatives. For instance, we're promoting adventure sports, river rafting and so on, and we're particular about people signing affidavits about keeping the riverbeds and environment clean. Similarly with cruise ships, we insist on affidavits about incineration of waste and keeping beaches clean. Eco-tourism is being greatly promoted, like our tea plantation tourism in the Northeast. That's definitely a part of taking people along, making everyone a stakeholder and making it a bhagidari system.

Officials said Indian companies did business worth $1.45 billion at Berlin. Is that true?

I know most of the people were very happy with their presence—I remember visiting the Kerala tourism mart, and they told me that within a couple of hours they sold out 300 houseboats!

What was the high point of your time there, personally?

Seeing the Indian flag flutter—among the 190 countries there, only the Indian tricolour flying—there's nothing like it.