They Are All Game

Slow off the blocks, but India’s gaming industry will soon be a billion worth 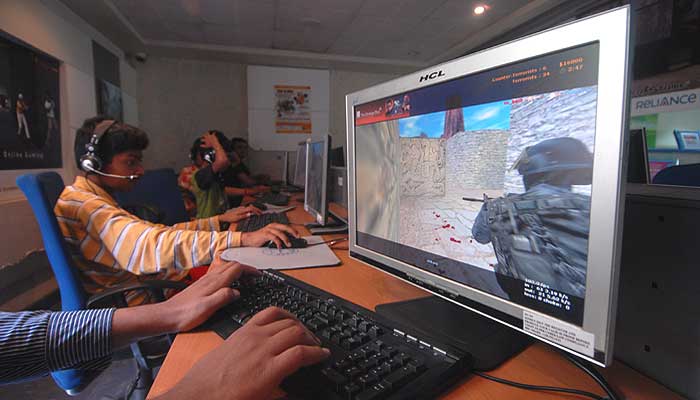 Day after day they sit in a dimly lit room with fixed gazes on the screen, ready to “kill” at the first opportunity. With every “kill”, fists are pumped up in the air and high-fives exchanged even as the captain shouts commands to be alert for “enemy movement”. Kunal, Gaurav, Pranav and Navneet are young—between 10 and 17 years—customers at Reliance World’s game parlour in Delhi’s Green Park. These schoolboys are all part of a clan, “XS”, playing the shoot-to-kill game ‘Counter Strike’, sometimes for up to 7 hours a day, against another clan in Delhi.

Their parents may not be too thrilled about it, but these boys represent a new class of young Indians who live their life in the virtual world of cars, guns and kingdoms. Electronic gaming has taken root in India. Till a few years ago, gaming was the exclusive domain of the rich, those who could afford the expensive game consoles, or kids who played on machines or the PC as a pastime. In recent times, however, gaming has captured the fancy of working executives, grown-ups and housewives alike. It’s now happening at the airport, in offices during lunch breaks and even at home—18-20 per cent of all gamers in India today are women gaming in the afternoons.

“It’s the new buzzword. With not enough things to talk among friends, gaming is the new way to network,” avers Vishal Gondal, CEO, Indiagames, who says the big push has come from mobile gaming. According to market estimates, every month India sees about 6-7 million game downloads on the mobile phone, making it a $60-70 million market. With vas and game providers bringing game download prices down to Rs 30-40 only, everyone with a handphone is now seen as a potential gamer in India.

Independent agencies and consultants see this surge increasing dramatically in the coming years. A recent nasscom report puts the size of the Indian gaming industry at $800 million by 2012. A December 2009 survey by India’s internet body IAMAI says the number of active internet users indulging in gaming has gone up from 25.3 per cent in 2007 to 41.2 per cent in 2008.

With broadband PC penetration increasing, online gaming is also reaching critical mass. Gaming sites like Zapak, promoted by the Reliance ADA Group, now have 120 million page views a month. In the last few years, Zapak has amassed 33 million unique users. Enthused by this, Zapak is moving on to set up gaming cafes which will have high speeds of around 2 mbps for players. Another portal, ibibo, says it’s also achieved a huge following for gaming on its portal.

Over the last couple of years, there has been a dramatic increase in gameplexes across the country—they now have over 80 per cent occupancy during weekdays, while weekends are pre-booked. Reliance World, for instance, has over 234 game parlours in 104 cities enabling online competitive gaming against neighbourhoods or even cities. Says Sunil Buch, EVP, Reliance World: “Online competitive gaming is the new rage. A lot of gaming cafes have started playing within small local-area networks (LANs). We provide a national online platform.”

So what’s hot in India? While international favourites among strike and anti-terror games like Counter Strike, and racing games like Need for Speed are always favourites, cricket is a huge hit in gaming and companies are making the most of this frenzy. Games based on films like Ghajini and Dev D have also been big hits while the current rage is the 3D game based on the film Avatar on X Box 360.

Similarly, social gaming has become the newest way to network. Games like FarmVille, Mafia Wars and Dragon Wars are seeing critical numbers among Indians. According to market estimates, these games alone have 7-8 million users, most of whom are officegoers of around 30-35 years of age with a good 25-30 per cent being women. Teen Patti on ibibo, for example, is played by more than 1,00,000 players daily.

Companies are clearly preparing the ground for something big. Computer hardware company Asus has brought its 3D gaming laptop to India within months of its international launch. The India launch of Microsoft’s racing game Forza 3 was concurrent with its global launch. Last week, Reliance Big Entertainment acquired a 50 per cent stake in Codemasters, a UK-based developer and publisher of video games like The Lord of the Rings, The Ashes and Formula 1. Gaming console companies have slashed prices of the hardware and software for gaming consoles like Playstation Pro and X Box to bring it closer to Indian homes.

One big bet is high-speed broadband coming to India, and thanks to 3G and 4G, this market is set to explode. Says Rohit Sharma, CEO of Zapak Digital: “Online gaming will become a mass market in this decade. A surge in online multi-player games will be witnessed with the entry of 3G. With more gprs handsets entering the market, mobile gaming will also expand.”

Of course, it’s early days yet. “Globally, games are as big as movie releases. India is still taking baby steps in this direction,” says Ashim Mathur, director, marketing, entertainment and devices for Microsoft India, who looks after the X Box in India. Then, some remain sceptical about gaming going mainstream. Says Santosh Desai, trend-watcher and CEO, Future Brands, “It will be an exaggeration to think that India is a big gaming market as gaming is yet to assume the status of a culture as in more developed gaming nations.” There may be cultural issues as well, with parents often frowning on this “distracting pastime”.

But there’s no denying the game-changers—the coming 3G speeds, easy availability of games and affordability of devices and software—are in place. Can cult status be far away?

Sita Won’t Sit In The Corner