These Arrows Don’t Miss Their Mark

Like a lover to the beloved, singers and poets promise Babasaheb the world of his dreams, while WhatsApp messages on him become a social scientist’s delight 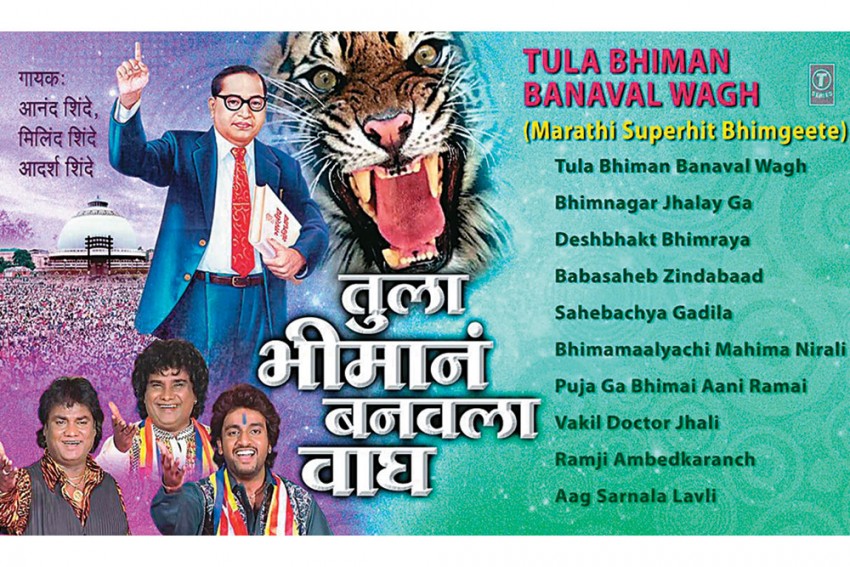 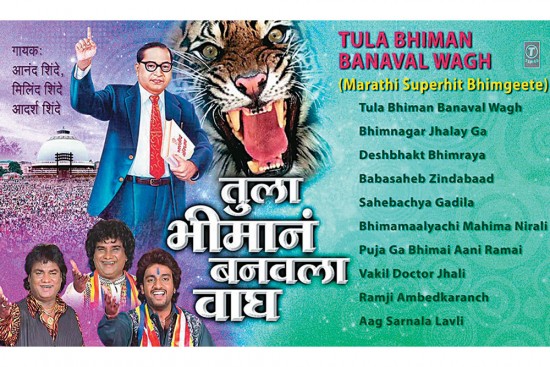 Riding on a chorus, the rhythmic chant gathers momentum—like history itself—and rises to a crescendo. The background music keeps up with the frenetic pace. This hugely popular song, set to DJ-style music by S.S. Azad, has a beat that gets into your body rhythm. It makes you tap your feet and want to tango with Babasaheb. As statue-saturated Ambedkar transforms into formless, mystical idea, you don’t even realise it is happening. The song somehow makes Baba so endearing, there comes a point when you too merge yourself with Him. Like the great Nusrat singing Allah hu, Azad manages to bring us closer to his god. In the Hindi lyric—“Tod zanzeeron ko azad ban jayenge hum”—the word azad (free) also weaves in the poet’s signature.

We’ll break the shackles, we’ll be free
Jai Bhim is the chant that will set us free

Purists may frown upon the word naahra in place of the proper Hindi word naara (slogan), but it works. It has the same charge as a Sufi song where the singer speaks of breaking all bonds, breaking with form itself, to merge with the formless one. The One is made tangible as you chant his many names—Doctor Bhimrao Ambedkar, Doctor Babasaheb, Bhimrao, Bhim, Bhima. Formality easily gives way to camaraderie. Like in Sufiana, the lord and master is also the friend and beloved.

Take another song of Azad—‘Hum teer woh aisey hain, lagte jo nishaane hain’:
We are arrows that never miss the mark
Don’t you take us on, we are crazy about Bhim
We are not moths that will waste ourselves on the flame

The words may not owe allegiance to Urdu or Hindvi/rekhta traditions, but they possess a strange spirit and flair. No Urdu poet could ever come up with “shama pe sadh jaaye”: to waste oneself on the flame. It is fascinating how traditional tropes like moth and flame are reconfigured in the Dalit imagination. “We are Bhim-crazy”: This is the tradition of Meera and Nizamuddin Auliya taking a turn towards something neither musicians nor critics have paid much attention to so far, much to their own loss.

Ambedkar is not just a political icon for Dalits. In these songs for Bhim, you find a blend of both nirgun (formless) and sagun (enformed) conventions of Bhakti: he is a deity but his power is beyond form. Speaking at Delhi University’s history dep­artment recently, I found myself saying, “What’s there for Dalits besides their bel­oved Babasaheb? To them, he is both the moon and the moon-kissed night.”

Then, as I sat down to write this piece, I played some songs I had downloaded from a WhatsApp group. Their sheer power left me speechless. Babasaheb is the paramour. He is the dream. He is the yearning. There is the longing to touch Baba’s words, to attain him, to fulfil his dream on this earth. Usually such frenzied devotion is reserved for film stars, or cricketing gods who can score 36 runs off one over. This generation needs to stop and think what it is that Ambedkar has done for a huge section of our society that he is no less than a megastar to them.

Ironically, Ambedkar, who spoke against hero worship and personality cults, couldn’t have imagined the adoration, worship and love he commands, that too in a popular genre. Born into a Kab­irpanthi family and raised on the abhangs of the Marathi Warkari sants (from Nam­deo to Tukaram), Ambedkar spurned not just Brahminic Hinduism but the Bhakti tra­dition too and sought refuge in the Buddha.

We may find many Gandhi songs, but this genre of ‘Bhim Geet’ is different. These songs help listeners to move away from the cruelty on the ground and imagine the fut­ure that their prophet sought for them. Like a lover promising the heaven to his beloved, these singers promise Babasaheb they would make his dreams come true.

There are practically no Dalits in our media and there is no media of any consequence representing the Dalits. But the emergence of social media has provided them with a platform. There are Twitter handles such as @Dalitcamera, @Dalit­diva, @Ambedkarcaravan and so on. Perhaps because Dalit presence on Twitter is poor, these handles muster hardly 10,000 followers. They are most visible on WhatsApp as Ambedkar groups.

For a few years now, April has been obs­erved as Dalit History Month across the Dalit world. And this year the Dalits are also celebrating the 125th birth anniversary of their hero. ‘Ambedkar runs’ are being organised in Hapur (Ghaziabad district), Agra, Delhi and almost every village of Uttar Pradesh. Thousands of young men and women participate in these awareness runs. Essay and debate competitions jostle for attention with statue inaugurations. Images and words are streaming into phones from everywhere. The celebratory messages and festive spirit on WhatsApp remind me of Holi and Diwali. But unlike such single-day festivities, these celebrations for Babasaheb started early in March and looks like they will go beyond April 14.

The very many messages shared on these WhatsApp groups are an invaluable commentary on politics and society that should be a social scientist’s delight. Many of the conversations focus on the need to remind Dalit children that it is because of Babasaheb that they get an education today; they owe the clothes on their body to him. The word ‘mission’ is repeated most often in these messages—that his mission is incomplete and needs to be accomplished. Here’s a poem:

The legs are tired
But the heart’s willing.
There’s the urge to live
The journey unceasing.
There’s a long way to go
The path seems unending
But don’t you halt, my Bhim-mate
Baba’s dream is beckoning

Just like Bhimrao becomes Bhim bec­omes Bhima, Dalit becomes Dalita and assumes a new sensibility: “It’s your ben­evolence Baba / without you there’s no Dalita.” This is by Ahmedabad’s Bhoopat Singh Jhala. Not all poets are expert wordsmiths but love for Babasaheb is such that it makes a poet of everyone.

The respectful third-person pronoun aap is used in ordinary speech, but in poe­try Ambedkar is addressed in the familiar first-person tu. It is only after Babasaheb bestows dignity on her that a Dalit is able to even appreciate the beauty of the moon or the splendour of the hills. It is as if the moon never existed before. And why would it for someone who was not even allowed to walk freely on the street or meet you in the eye, forget gape at the sky:

Besides grief over unending atrocities, songs and poems, there are also anti-caste jokes. Here’s one. In Japan, after getting a train to touch a speed of 603 km per hour, they are doing a test run for 5G. Meanwhile, the pious in India are forwarding the message “Om Namah Shivaya” to 11 persons because they have been told it will bring on a miracle and win you a free recharge.

(Translated by S. Anand and Uttam Seng­­upta. Read in Hindi on outlookindia.com)

A Baker’s Dozen For Babasaheb