There's The Lord, And His Gopis

The Dera is facing CBI action. Is the flare-up connected? 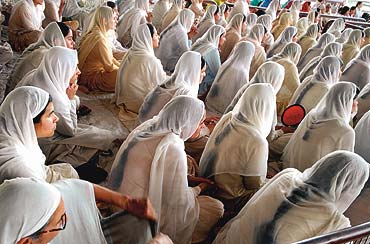 outlookindia.com
-0001-11-30T00:00:00+0553
Why did the Dera Sacha Sauda (DSS) chief, Gurmeet Ram Rahim Singh, release a full-page ad last fortnight with himself decked up as a latter-day Guru Gobind Singh? There was no celebration to warrant the publicity. Sources say the provocative advertisement as well as the violence that followed was timed and orchestrated to send out a message on what could happen should the DSS chief be arrested in any of the three cases the CBI has filed against him—including two counts of murder and one for sexual molestation. Incidentally, the tamasha was unleashed 10 days before the CBI deadline to submit its final report to the court.

At the core of Baba Gurmeet Singh's troubles is a letter written in May 2002 by an anonymous sadhvi to then prime minister Atal Behari Vajpayee and the chief justice of the Punjab and Haryana High Court. In it, she alleged sexual harassment of women inmates of the DSS by its chief. This led to the CBI inquiry being ordered.

Here's what the sadhvi's letter revealed: "One night, at about 10 pm I was called by Guru Maharaj to his gufa (den). I found him watching a blue film with a revolver lying next to his pillow. He told me that as I, a sadhvi, had dedicated my mind and body to the 'seva' of the guru, he the guru wanted to claim his due. When I protested, he told me that I should have no doubt he indeed was God. 'Didn't Lord Krishna make love to his gopis every night? Yet people regard him as God,' he told me. When I was still not convinced, he told me he could shoot me here and now and no one would raise a finger, not even my parents. 'The chief ministers of Punjab and Haryana and many central ministers come and touch my feet. I can get your family members removed from their jobs and get them killed if you protest,' he told me."

"There are about 40 unmarried women between 35-40 years of age in the ashram regarded as 'devis'. We are not allowed to even look at another man, have to keep our heads covered with a white dupatta.... But our life here is worse than that of prostitutes. Even if our parents call we are not allowed to talk to them without the guru's permission. If any sadhvi goes back home and tells her family members about what has happened to her, goondas from the deras threaten the family members with death forcing them to keep quiet. If you get the sadhvis of the dera medically examined you will learn that they are not sadhvis...."

What followed the announcement of the CBI probe was a tale of intimidation, murder and threats resorted to by the dera management. A diary of events since then: Throughout 2006, Dera followers kept submitting affidavits to the authorities saying they would fast unto death if the CBI investigation was not stopped. The latest violence seems to be an extension of that.

Rattle Of The Sabres