Unlike BCCI boss and IPL team owner N. Srinivasan, chief flouter of rules, Kumble should keep one hat on 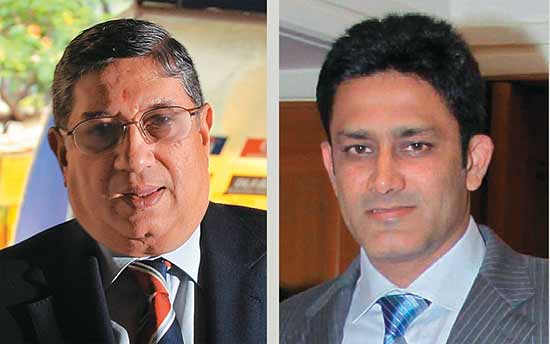 Iniquity flows in Indian cricket from the top in a ceaseless stream. N. Srinivasan is the BCCI secretary, president-elect, and a member of the IPL governing council. He helps frame the rules that govern the IPL, he’s also the  co-owner of Chennai Super Kings. He employs K. Srikkanth, the chief Indian selector, as an ambassador for his team. Says an Indian player: “This has been written about a million times, and will be in future too. You can’t do anything about it.”

Earlier, the BCCI prohibited its office-bearers from having commercial interests in any cricket run by it. In contravention of this rule, India Cements, in which Srinivasan is a majority stakeholder, bought the IPL’s Chennai franchise. This rule was retrospectively amended eight months later, in September 2008, to legitimise Srinivasan’s purchase. This prompted former board president A.C. Muthiah to petition the Supreme Court, which has reserved its judgement.

In this scenario, it’s critical for Anil Kumble—a picture of rectitude—to set an example, believes academic Mukul Kesavan. Kumble is president of the Karnataka State Cricket Association, chairman of the National Cricket Academy,  and “chief mentor” of Royal Challengers Bangalore—in the latter role, he “works with us full-time,” says RCB owner Vijay Mallya. “The best thing that’s happened to Karnataka cricket is that Kumble has taken over as president,” says Kesavan. “He’s involved in the RCB’s selection process; his presidency of KSCA becomes a problem if he is formally involved in the Karnataka selection process, which he’s not. But, given the fact that Indian institutions (especially cricket boards) are notoriously susceptible to directions from the top, it would be ideal if a person of Kumble’s integrity did not wear two hats.” Former India captain Bishan Singh Bedi also feels Kumble’s current position is ethically problematic.

Kesavan believes that conflicts of interests among journalists should be declared if they’re benefiting directly from the ipl or its official TV channels. “You get big sums for analysing auctions and matches on TV, so why would you be critical of the IPL and endanger your association?” says a journalist who declined to analyse IPL auctions for a TV channel in return for money.