There's A Spy In My Soup 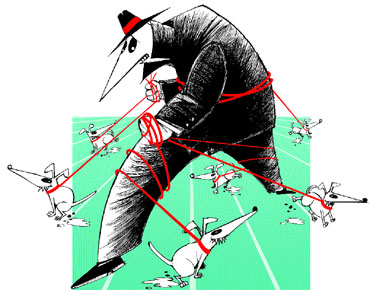 In the last year or so, RAW has seen some of the highest recall rates of its officers from foreign postings, causing much embarrassment. Now a few more Indian ambassadors/high commissioners have written to the government complaining about RAW officers posted at their embassies/high commissions and seeking their recall. Last year saw the return of P. Hanniman, a joint secretary-level officer, from Brussels after allegations of financial bunglings and siphoning of secret funds surfaced.

This year there are pending requests from the Indian ambassador to Germany, Meera Shankar, requesting that a RAW officer, K. Jha, be recalled. Similarly, the Indian high commissioner in Sri Lanka, Alok Prasad, has complained about P. Rao, a woman officer posted in Colombo. Prasad feels that Rao's meetings with senior Sri Lankan dignitaries were an embarrassment. A similar request has been received from the Indian ambassador to Afghanistan.