There's A New Chair In The Shop

With Sharif leaving it to the PPP, options are whittling down on the next Pakistan president 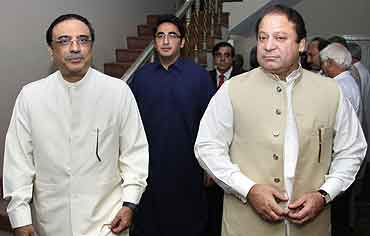 Cut to last year. Days after Benazir was buried, her husband, Asif Zardari, told hundreds of grieving party workers, "We will not only put the PPP in the prime minister's house but portraits of the PPP leader will also hang in the presidency." The implication was clear: since Benazir's portrait couldn't be hung in the presidency as long as Pervez Musharraf was president, the PPP would push for its own president at an opportune moment.

Eight months later, in an ironic twist of fate, it's Zardari who's the frontrunner for the president's office, an office his wife didn't think much of. An office even Zardari himself didn't believe he would ever occupy. Not willing to contest elections (presumably because he isn't a graduate), Zardari has perhaps had a rethink—better to be president than just the power behind the prime minister. Wearing one more cap won't hurt him.