There Will Be Blood

Presenting what would possibly be one of the best examples of method acting in recent times... 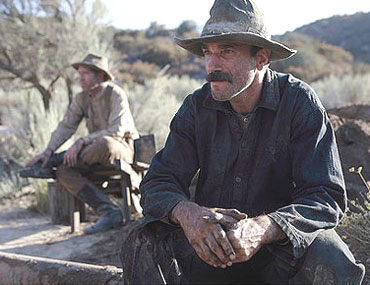 Much of the power in There Will Be Blood draws from its protagonist Daniel Plainview who proudly calls himself the ‘true oilman’. The ambitious, opportunist and wily oilman has little to redeem himself and is ruthless and singular in his aim. He has no respect, no empathy, no warmth for anyone and his only god, religion and philosophy is oil. As he puts it, he has ‘seen the worst in people’ and the hatred has been built ‘little by little’. His personal life is quite a mystery. An enquiry about his wife is answered tersely: "She died in childbirth". The relationship with the half-brother who comes into his life from nowhere is more a deception than something real. The only glimmer of humanity is his relationship with the adopted son HW (presented in a more matter-of-fact manner than with any emotional graph) but even that is set aside when the boy loses his hearing in an oil well accident and is abandoned on a train. He confesses to having used the child’s sweet face to expand his business. Though HW does come back to him, the relationship remains tenuous. Lewis gives the loathesome character his all. Be it his walk, the demeanour, the rasping voice, he works hard at every aspect of the personality, presenting what would possibly be one of the best examples of method acting in recent times.

Opposed to him is the equally dislikeable godman Eli (Dano) who shows Daniel oil in Little Boston and wants the oil money for his church. For Daniel, Eli’s religious congregation is ‘one hell of a show’ and he a ‘false prophet’. Together, they provide a brilliant picture of America at the turn of the century—thriving and flourishing as well as being exploited by oil and religion. These were the blood and lifeline then—and continue to be so. The film also uses blood as we see in the mine accidents as a metaphor for the undoing of man. In fact, the plot is encapsulated in a rather pat manner in the climax of the film where oil and religion collide and blood literally flows endlessly.

The sprawling, dark epic hinges on atmospherics and the moody air. It’s heightened further by the ominous music, especially in the long, wordless opening sequence set in the mines with man pitted against nature.

Slalom Down The Hill