There Was Nobody At Hut Bay

...that was when they landed. Now, the VHAI volunteers have woven a durable safety net there. 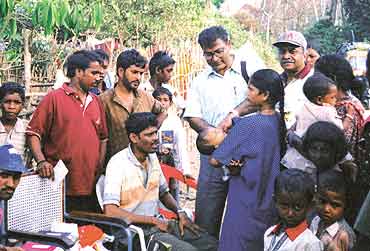 The old, creaky M.V. MVS was the first ship to touch Hut Bay at the tsunami-tainted dawn of the new year. By then, news of the disaster had spread, but the extent was yet to be assessed. As Taposh Roy and his team from the Voluntary Health Association of India (VHAI) set foot on Little Andaman, they expected to be met by sad hungry faces. Instead, no one was in sight. For more than 3 kms there lay the remnants of nature’s fury.

Such a situation was not new for the volunteers. In the last 34 years, disaster management has been a key focus of the organisation. This time, they chose Hut Bay and Harminder Bay, one of the worst-affected by the killer waves. Besides, security considerations excluded foreign agencies here. "Hence relief work is confined only to the government and Indian ngos, so it made sense to focus on this region," says Bhavna Mukhopadhyay, director, development communications.

A search was undertaken to locate the survivors—some 5,000 families who had rushed for cover to the tekhris or highlands about 8-10 km away from the coast. Access to these...