There Isn’t Even A Straw Left

Scanty rains have left the fields in Tamil Nadu all dry. The farmers feel throttled. 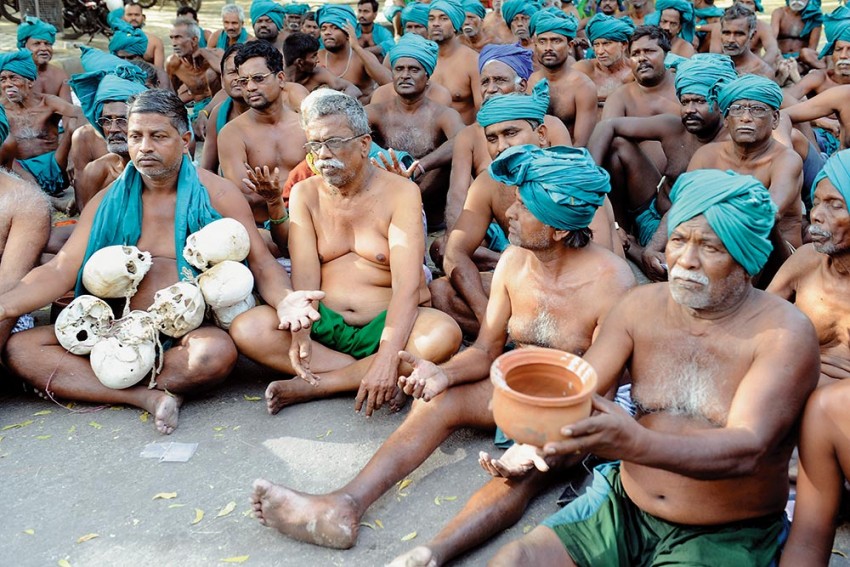 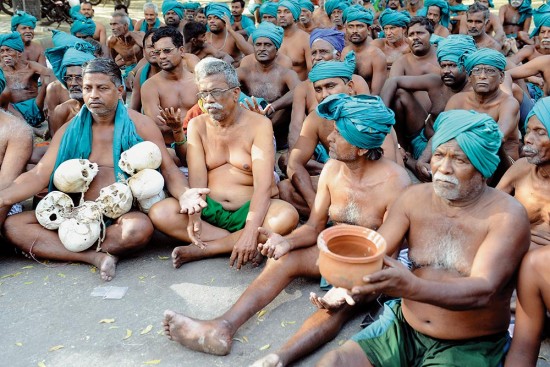 The farmers in Tamil Nadu are a community who pray for rains in their neighbouring state as well. It’s an annual plea to god—and not exactly inspired by altr­uism. For, only a bountiful southwest monsoon can fill up Karnataka’s reservoirs along the Cauvery that feeds the sprawling rice fields eastward, across the border downstream. Today, Tamil Nadu faces its worst agriculture scenario in recent times: the rains were scantiest in 120 years when Karnataka, too, is facing a dry year. With very little Cauvery water from its riparian neighbour and even less from the skies, 2016-17 is proving to be Tamil Nadu’s most barren year in over a century.

There is deep worry among the ryots in the fertile belt comprising the middle districts of Tiruchirappalli, Thanjavur, Thiruvarur and Nagapattinam that grow 16 lakh acres of rice. “If only Karna­taka reservoirs are on the brim can paddy cultivation flourish in our state,” points out Mannargudi S. Ranganathan of the Cauvery Delta Farmers Association. The area needs 330 tmcft (thousand million cubic feet) of ­water for a rice-growing year. “A decent northeast monsoon (in November-­December) ensures a good double crop. In 2016, both failed us.”

In fact, this year, rains did not cross even 50 tmcft. “That is how bad it was,” Rangananthan observes. “The cla­yey soil permits just paddy. That rules out other short-term cash crops.” The situa­tion worsens in the tail-end areas of Nagpa­ttinam and Thiruvarur, just before the river’s distributaries merge with the Bay of Bengal. This year, ­salinity has made farther inroads in the absence of fresh Cauvery water to soak up the farmlands.

In this battle of distress, it is the far­mer who has paid the price—often with his life. Two-thirds of the 59 suicides rep­orted in the state in 2016 due to failed crop has been in Nagpattinam district. The TN Farmers’ Union says the gover­nment initially acknowledged 17 suici­des by farmers and gave each bere­aved family a compensation of Rs 3 lakh. “The remaining, too, did get ex-gratia—but without a public disclosure that they were farmer suicides,” says P.R. Pandian of the union. “We have to wage a long and continuous battle for farm rights.”

The state government says its “strong” track record in implementing drought relief and “massive rollout” of the Prime Minister Fasal Bima Yojana have helped mitigate the impact of the disaster. “A record number of 15.32 lakh farmers were enrolled in the current rabi season, covering 32.22 lakh acres so far,” acc­ording to an official spokesman. “The coverage of farmers and area under crop insurance in Tamil Nadu have been among the highest in the country.”

Many dispute the government’s tall claim about crop insurance. “Most of us haven’t got even last year’s compensation,” says a farmer.

The farmers aren’t convinced. “The coverage might be high and the intent might be good, but on the ground is the farmer able to get his money when a crop fails?” says Pandian. “Most farmers have not received even last year’s compensation. When it is companies—private and public-sector—that implement an insurance scheme, what is the motive? It is to increase business, collect premiums, right? They won’t compensate in time when the actual loss happens!” He feels the scheme will be treated like ­motor vehi­cle insurance. “Unless a government age­ncy is directly involved, this will not be viewed as a service.”

A senior government officer suggests that the Centre should instruct at least the PSU companies to pay the crop INS­urance amount within 30 days of crop-­cutting experiment—to prove to the agent that the crop has actually failed to yield any produce. “Only if the farmers get the insurance money in time can they use it for the next sowing season,” he points out. “The government anno­unced drought relief totalling Rs 2,447 crore in January. By March, the amount was deposited in the bank accounts.”

Farmers associations have pointed out that unlike in the past, when only rice-sowing used to be hit, this year even long-term crops like coconut, ban­ana, sugarcane have suffered—for, 21 of Tamil Nadu’s 32 districts faced a 60 per cent rain deficiency. “Even rubber plantations in the south have been crippled and so has turmeric cultivation in Erode district,” concedes a senior government officer. “This drought has hit a wider swathe and virtually every kind of crop.”

For the average farmer, more than the loss of crops, what hurts is the erosion in pride over his inability to repay farm loans. “Farming rides a lot on hope—hope for good rains at the right time and hope for a good market dem­and,” points out Veera Pandi, a paddy farmer in Sirkali, which is also drought-hit. “Once that hope crumbles, the farmer feels crushed in body and spirit. Our pride also dies.”

Gale Tandava Over A Swathe Of Wilted Hopes