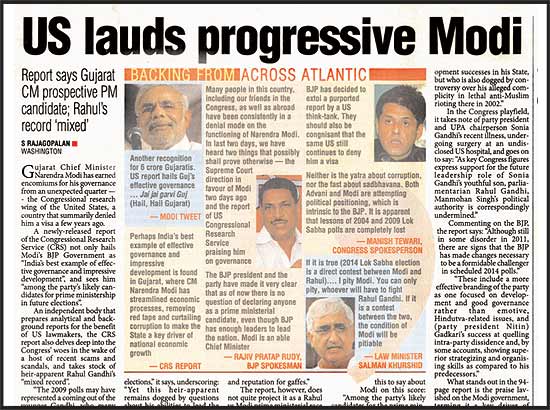 K. Alan Kronstadt, a specialist in South Asian affairs at the Congressional Research Service (CRS), was the coordinator of its September 1 report on India that named Gujarat CM Narendra Modi as a potential prime ministerial candidate in 2014. Excerpts from a conversation with Ashish Kumar Sen.


Your report has created ripples in India. Are you surprised?

It’s not uncommon for the content of CRS reports to receive notice in the countries discussed therein. Such content is sometimes used selectively and countervailing content is downplayed or dismissed such that the resulting reporting can be inaccurate or misleading. This seems to be the case with some coverage of the September 1 India report.

The BJP has highlighted the report as proof that Modi is India’s best chief minister. Is that your assessment?

The CRS does not make such assessments and its reports should really not be taken as “proof” of anything. Rather, we offer evidence in support of existing arguments, but in balanced and non-conclusive ways that typically acknowledge and provide evidence for counter-arguments. The report in question also acknowledges some of both the positive and negative perspectives being expressed about major Indian political parties and figures.

Are you concerned that parties are playing politics with your report?

The CRS reports are not primary documents and do not in any way reflect US congressional or governmental policy beyond what is carefully and explicitly cited and attributed to primary sources.

In 2005, the Bush administration denied Modi a visa to visit the US because of his alleged role in the 2002 riots. Has he become more palatable in Washington since then?

The CRS has no comment on whether Modi has become either more or less “palatable” here since 2002. However, as noted in the report, in 2008, 27 members of the US Congress joined the US Commission on International Religious Freedom in urging the state department to reaffirm its past decision to block Modi’s entry into the US. So there are ongoing concerns about his alleged role in the riots.

Are you concerned about the allegations of Modi’s role in the riots?

In its annual reports on international religious freedom, the US state department documents that consular and senior embassy officials in India continue to express concerns about what is called the slow pace of bringing perpetrators of the 2002 Gujarat violence to justice, including the government’s failure to arrest those responsible. The US Commission on International Religious Freedom’s 2011 report notes that the International Religious Freedom Act of 1998 includes provisions to bar US entry for individuals complicit in “severe violations of religious freedom” and that this provision has been invoked only one time—to deny entry to Modi for what they describe as his “complicity” in the riots. So there are credible reasons to believe the matter’s not settled.

To what extent will Modi’s alleged role in the riots be an obstacle in any future prime ministerial bid?

As in footnote 175 (to the report), Modi’s aspirations face significant obstacles, not least the likelihood that Muslims and liberal-minded Hindus would represent an anti-Modi bloc at the national level, and the BJP’s key ally in Bihar, Nitish Kumar’s JD(U), could be expected to abandon the alliance in protest. (Geeta Anand, Give Us Your Account, Mr Modi (op-ed), Wall Street Journal, Feb 23, 2011; Karan Shah, Narendra Modi, Prime Minister? (counterpoint, outlookindia.com, Apr 5, 2011).