Glitzy retailers in glittering new malls are fighting for their lives 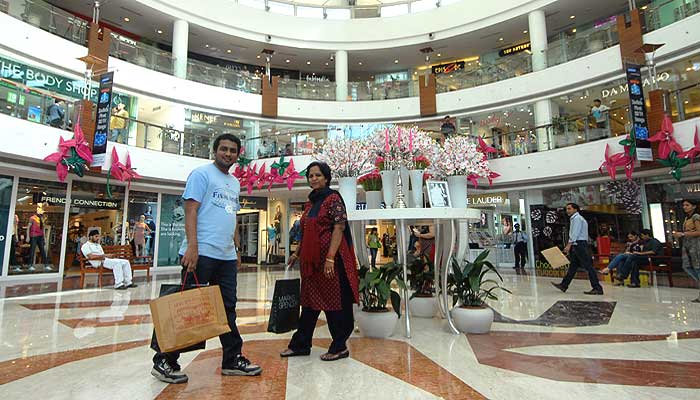 There was a time not so long ago, whenever we were bored, we visited “uncle and aunty” next door and everyone sipped cups of milky tea till the confab died a natural, cloying death. Over the last five years, a heady cocktail of shopping, movies, food courts, five-star amenities and surround-sound entertainment had increased socialising options. But, funnily, after the infancy of the mall rats, much of the listlessness has returned. One can’t miss the forlorn corridors and empty parking lots, shuttered-down shops, and omnipresent security guards guarding these phantoms of the great Indian retail dream.

Since 2009, some 2,500 retail stores have closed down across the country. It is predicted that at least half the shopping malls being built during 2010 will also not survive. The bad news is coming in faster than the latest foreign brands of shoes or perfumes, from Ahmedabad and Pune, Delhi and Bangalore, Mumbai and Gurgaon. “Blame it on bad design, over-indulged models or terrible management; I’ve seen shopping malls with cobwebs,” says Susil S. Dungarwal, who runs Beyond SquareFeet, a retail consultancy. By 2012, at least 50 per cent of existing malls will also shut down, he says.

It’s a soul-searching phase for modern retail, a $21-billion behemoth whose growth rate is tapering from a scorching 33 per cent in 2006, to hit 21 per cent this year, according to Technopak Advisors. “Mall developers overestimated demand and retail chains had not done proper analysis of catchment areas, tenant mix or the right USP to attract footfalls,” says Sachin Sandhir, MD of the Royal Institution of Chartered Surveyors, India. 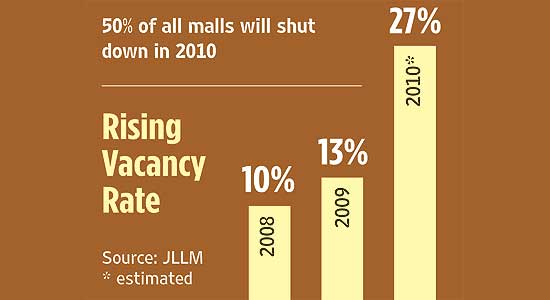 That’s why, even in places bursting with aspiration, such as Ahmedabad, many malls have closed or have been converted into office spaces, hotels and residential properties (where returns are increasing). Rajkumar Pugalia, who runs Gallops, the first mall in the city, shelved plans for a Gallops 2 and decided to convert the property into a five-star hotel. He states “oversupply” as the cause. “There are so many malls clustered together on one road that it’s impossible for retailers to survive,” he says.

Shaken by such episodes, echoed elsewhere in the country, those in the mall development business as well as the retailers within are in hunker-down mode. And they’re exchanging notes on service quality, printing publicity leaflets, organising attention-grabbing cultural events (women’s car rallies, art exhibitions, embassy get-togethers, birthday parties), rotating retailers around the floor to create the impression of newness.

There’s more talk now of “partnering” and sharing revenues rather than extracting rentals. Mall developers have not only moved to revenue-sharing (sometimes accompanied with a fixed minimum guarantee), they are also looking at residential property as an alternative option. Last year in Mumbai alone 2.5 million square feet mall space got converted to residential and commercial complexes. Up ahead, most new projects are likely to be residential and commercial complexes.

The onus is on sharing revenues rather than extracting rentals. Mall developers are looking at residential property.

In the meantime, the price-conscious Indian customer has also morphed into a demanding one. If a mall is glitzy and plush, air-conditioned and well-lit just like people want, retailers find the overhead costs zoom out of control. If a mall is cobwebby and dusty, footfalls disappear quickly though costs are minimised. “It’s a bit of a chicken-and-egg situation,” complains Kishore Bhatija, of InOrbit, a chain of three malls in Mumbai and Hyderabad with a fourth coming up in Pune. “Keeping project costs in control is a challenge. At the same time, retailers need time, at least a few months, before footfalls convert into actual sales. Everyone has to be patient,” he says.

That’s not easy. “You have to get customers to walk into a store and say ‘Oh, I can buy this!’,” says Rajiv Duggal, CEO of the Select CityWalk in Delhi. The minimum spending power of the 31,000-odd daily visitors here should ideally be around Rs 2,500-3,000—but only 40 per cent buy anything, which could range from a cup of coffee to a T-shirt, or a Rs 7,000 pair of shoes. “Our visitors are not just lolling around: the women of south Delhi don’t have time to loll,” says he.

Unlike other places, Duggal claims, SCW does 50 per cent of its business on weekdays. In most metropolitan malls, the breakup is usually 60:40, or 70:30, with more transactions on weekends. SCW changed that. It could be the feeding rooms for new mothers, the sitting benches that face away from, not towards, lingerie stores, the female car parking staff, the security guards who had to memorise store locations, or a cab service for single women that did the trick.

Many malls are aspiring for that differentiation edge. Next door to SCW, DLF’s Prashant Kalyani, for one, is reorganising the mall’s business model. Under pressure to improve their bottomlines, retailers are also less tolerant of failure. Each unit in a retail chain, and every store in a mall, needs to pull its weight, says Thomas Varghese, CEO, Aditya Birla Retail Ltd, which recently closed down several supermarkets in Ahmedabad and Nashik. “We give them 2-3 years, if the store contribution level is not up to expectations we close them. Just because a few supermarkets are doing well, we cannot continue,” he says.

Actually, given that no food and grocery retailer has truly succeeded in India, it becomes all that tougher to find the right type of anchor store to drive sales. New stuff is being tried out. An otherwise lease-model based mall, the Neptune Group’s Magnet mall in Mumbai also has a Metro Cash & Carry store, which covers nearly 20 per cent of the space. While the rest of the mall will open in June 2010, the C&C store is already functioning. The mall will also have another attention-grabber: Ten mini-anchor stores, instead of the usual one or two.

Whatever the formulae, the retail business is in the throes of a makeover, and trying hard to keep its eyes fixed on the dream, which is that Indians will buy the latest product, provided they get a world-class experience. “This is only a blip,” avers Nirupama Soundararajan, retail consultant at ICRIER. Be that so. The good news for now is that post the 2008 and 2009 mayhem, a semblance of reason is returning to shopping malls.

By Pragya Singh and Lola Nayar with Arti Sharma

They Are All Game