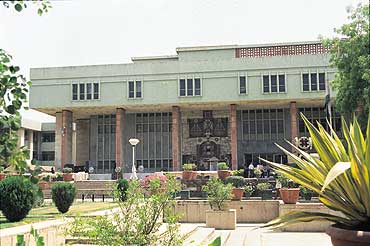 outlookindia.com
-0001-11-30T00:00:00+0553
How clean is our higher judiciary? Early this year, instances of alleged nepotism and indiscreet conduct by members so upset a judge of the Delhi High Court that he shot off a letter to his colleagues on the bench, pleading "for repairing, to some extent, the damage done and restore credibility and confidence of the public". That was on January 21 this year. The author was Justice R.S. Sodhi, formerly an eminent human rights lawyer and now a sitting HC judge.

Barely three months later, the legal fraternity was shaken to the core as another sitting judge of the Delhi HC, Shamit Mukherjee, resigned and was later arrested as a prime suspect in the Delhi Development Authority scam. A month later, judicial circles were shaken yet again as the Bar Council of India (BCI) released, state by state, lists of HC judges whose relatives are practicing in the same courts.

The figures, provided by the various HC bar associations, are startling: more than half the judges in the Delhi HC have relatives practicing in the same court; one judge of the Madhya Pradesh HC has as many as five relatives who are practicing lawyers; ditto the sons of six Rajasthan HC judges. Details have been furnished by the bar associations at the request of the Bar Council of India, a statutory body set up under the Advocate's Act, 1961.

However, the accuracy of this information has been questioned by sitting judges whose names figure on the list. The Supreme Court Advocates on Record Association—although it doesn't oppose the BCI campaign for a cleaner judiciary—pointed out a couple of inaccuracies in the Delhi bar association list. The BCI admitted to the odd lapse in the Delhi list, but stands by the rest of the information.

Significantly, in his letter (Outlook has a copy), Justice Sodhi, who wasn't available for comment, made suggestions for curbing the malaise "in the functioning of courts in Delhi at least". Judges whose "kith and kin" were practicing either in the HC or in the courts below, should be subjected to certain self-imposed restraints, his letter said. For instance, they "may not be entrusted with the annual confidential reports (ACR)s of...subordinate judiciary". Also, they "should not be included in the vigilance and administrative committees of this court". He also pointed out that if the chief justice himself had practicing relatives, he should consult his two senior-most colleagues before framing the court roster.

In terms of conduct, the letter suggested "the statement of values evolved by the Supreme Court should be adhered to and implemented". Besides, it said judges should be careful over misuse of their official residences, and urged they be "discreet in their dining and wining". In the light of the Shamit Mukherjee imbroglio, this sounds almost prophetic.

Delhi HC Bar Association secretary D.K. Sharma says he is aware of Justice Sodhi's letter and approves of its contents. "Some sound suggestions have been made by the justice and should be discussed," he said. "Of late, we have seen reports of judicial misconduct from Karnataka, Rajasthan, Punjab and now, Delhi. This will erode the public's faith in the judicial process".

The Delhi association was the first to furnish the details sought by the Bar Council of India. So far, only seven bar associations have responded. According to BCI vice-chairman Adish C. Aggarwala, legal safeguards against nepotism are already in place.The BCI, the apex regulatory and disciplinary body for lawyers, has laid down strict norms (BCI rules, Chapter II, Part VI, Rule 6): "An advocate shall not enter appearance, act, plead or practice in any way before a court, tribunal or authority mentioned in section 30 of the (Advocates') Act, if the sole or any member thereof is related to the advocate as father, grandfather, son, grandson, uncle, brother, nephew, first cousin, husband, wife, mother, daughter, sister, aunt, niece, father-in-law, mother-in-law, son-in-law, brother-in-law, daughter-in-law or sister-in-law".

On the lists of judges' relatives submitted so far, sons and daughters have pride of place but brothers, daughters- or sons-in-law, wives, nieces, nephews and even fathers too feature frequently. The BCI rule, incidentally, refers not just to the HC benches but also to tribunals where the concerned judge may be a member or presiding officer.

As with all rules, there are loopholes. Lawyer A, who is "well-connected", need not appear before a bench on which his relative sits. He could appear before the relative of his buddy, lawyer B, who in turn has no qualms about appearing before lawyer A's relative. "We call it the phenomenon of uncle judges," explains Sharma. There are times when the "nephew" of an "uncle" judge could be practicing in a lower court rather than in the HC itself (the subordinate judiciary comes under the administrative control of the HC).

But Aggarwala maintains there is no loophole—Rule 6 clearly debars relatives from appearing in the court per se. The BCI vice-chairman sees no merit in press reports that some judges had pleaded ignorance of this rule. "The law degree syllabus prescribed by the BCI includes a study of its rules. So ignorance can't be any excuse," he says, adding the BCI's rules are approved by the Chief Justice of India.

A senior law ministry official concurs that judges cannot claim to be ignorant: "Prior to his elevation, a judge is expected to provide details of relatives who are practicing lawyers. No judge can claim ignorance of this rule".

The BCI has demanded that judges who have relatives practising in a particular court be transferred to a court elsewhere in the country. Geography, however, may not eliminate the phenomenon of "uncle judges", but it could check it. As for the SC, "morality is the only answer. A justice could request his relatives to desist from practicing in the court", says Aggarwala. "These steps are necessary to preserve the dignity of the judiciary and avoid needless criticism in the media," he adds. While the BCI feels the legal community must put its house in order, it has no intention of compromising the cordial relationship between the bar and the bench.

"There have been cases when lawyers facing disciplinary proceedings before the council have been elevated to the bench," says Aggarwala. The method of appointment of judges has recently come under the media scanner, after reports that the law ministry had cleared appointments of judges who did not have a clean track record. "It isn't fair to blame the government, as the Chief Justice of India is the deciding authority," a law ministry official pointed out.

The ongoing imbroglio has focussed attention on the 98th Constitution Amendment Bill, which provides for the setting up of a five-member National Judicial Commission to oversee the appointment and transfer of judges. It was tabled in the budget session but a political consensus on the bill is yet to be arrived at. The commission will give the government a larger role in judicial appointments, as the law minister would be a member. However, the judiciary would still have the final say, as the cji would be the chairman and the two senior-most judges of the Supreme Court would be on the panel.The fifth member would be an eminent citizen, nominated by the President in consultation with the PM.

But lawyers and legal experts are agreed that setting up a Judicial Commission alone will not help. The legal community needs to introspect and honour the code of conduct laid down by the Supreme Court.