Theories To Live By

The ingress of management practices into politics bodes well 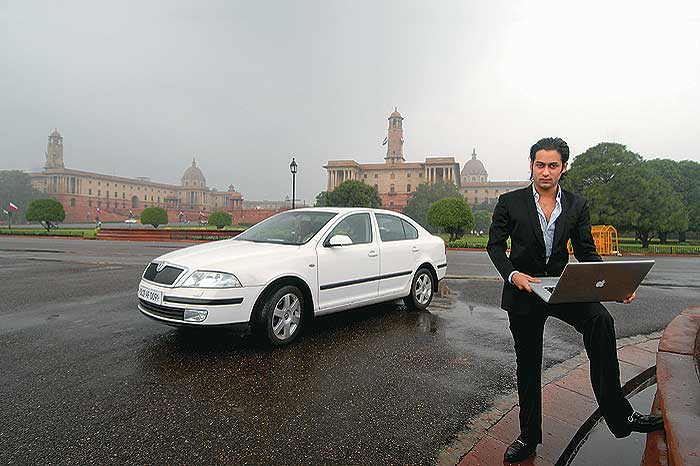 Can management mesh with politics to further the ultimate art of the possible? From civil society to politics and even in Parliament, there is an increasing infusion of individuals who have that coveted three-letter tag, MBA, appended to their name. Most say they have given up high-paying jobs “to do their bit for the nation”. It’s too early to define them as the changing face of Indian politics. It’s easier to assume it’s not all altruistic.

So, what exactly draws these MBAs into the uncertain world of politics with its maddeningly complex caste and regional equations, not to mention the inherent vagaries of the calling? The reasons vary from being scions of political families to plain ambition, interest in public policy-making or even a desire to understand how the system works. But it’s not an easy shift. “It is one thing to train a politician in the art of management and another to train an MBA in policy formulation. Policy formulation is not numbercrunching, which is what you are taught in MBA,” says Congress spokesperson (and an MBA) Manish Tiwari. 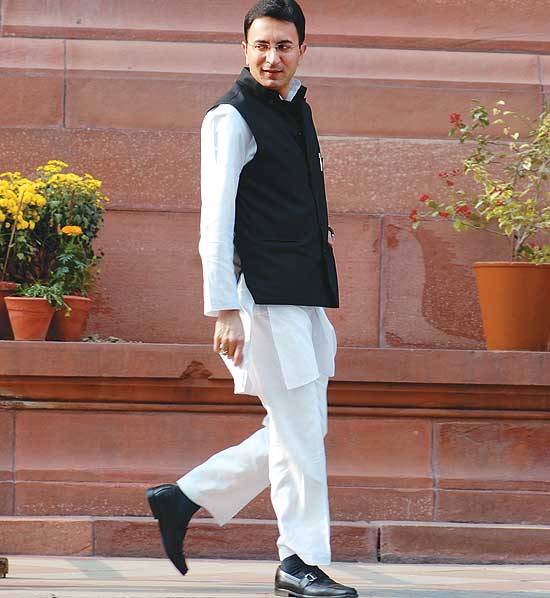 “Truthfully, I can’t say that it (the MBA) has helped me in my political career but there is an overbearing influence.” Jitin Prasada, MBA, IMI, Delhi

Despite “politics being in the house”, 37-year-old Jitin Prasada says he had no plans to enter politics—till his father’s death in 2001. “Those three years with my father not being there and the family not being in a position of power taught me more than what an mba did,” he admits. He adds candidly that while management training and his tenure in the corporate sector has taught him to be more “methodical” and focused on “targeted delivery”, to market yourself better and communicate better, it’s the grassroots work in his home state UP that has been the biggest learning experience. Unlike in the corporate sector, in politics there is great uncertainty, as “people’s expectations” influence decisions. After all, they hold the power to your future.

In the present Lok Sabha, of the over 140 MPs with post-graduate degrees, at least a score have done specialisation in management—eight of them hold ministerial posts. But some experts and politicians remain mildly sceptical on the usefulness of an MBA in Indian politics. “There are several policy areas which could do with some management skills but democracy and votebank politics demand a different set of managerial skills that are not necessarily in line with what the B-schools teach,” says G.K. Karanth, professor and head of the Centre for Study of Social Change and Development at the Institute for Social and Economic Change, Bangalore.

Conversely, pointing to the development projects aided by some techniques of management being ushered in by P.D. Rai, Sikkim member of Parliament, Anil K. Gupta of IIM-A stresses, “There is a need for management in every field. Politics is no exception.” Despite the disjuncture between votebank politics and B-school principles, experts feel the willingness to adhere to the latter should not suffer particularly when it comes to governance. In fact, they argue, management practices should gain an upper hand.

Debashis Chatterjee, director of IIM-K, recalls having designed and conducted a special three-day course for politicians from all parties in UP in 2002-03 (during his tenure at IIM-A), with most participants “only wanting to know how to win an election”. Today, many politicians seek MBAs as interns to help them with research and strategy planning.

We seem to have come a long way from the 1960s and ’70s when B-school principles often came in for ridicule (the first thing new MBAs were told was to unlearn everything). Remember the scepticism that met Rajiv Gandhi’s zeal to usher in new ideas in management and technology into governance? It’s been a sea change, considering that now we have the likes of Nandan Nilekani, with his tech focus and his MBA-like management ideas, as part of the government. “What you are seeing is a gradual welding of Chanakya and Bill Gates,” says Karanth.

During the 2009 Lok Sabha polls, the “packaging” or marketing of parties in the fray was evidence enough of corporate culture merging with politics. Apart from that, the same rules—vision and execution of projects, strategy formulation, administrative acumen and innovative solutions to achieve targets—can apply in both business and politics, feels Prof Rajeev Gowda, chairperson of the Centre for Public Policy at IIM-B. 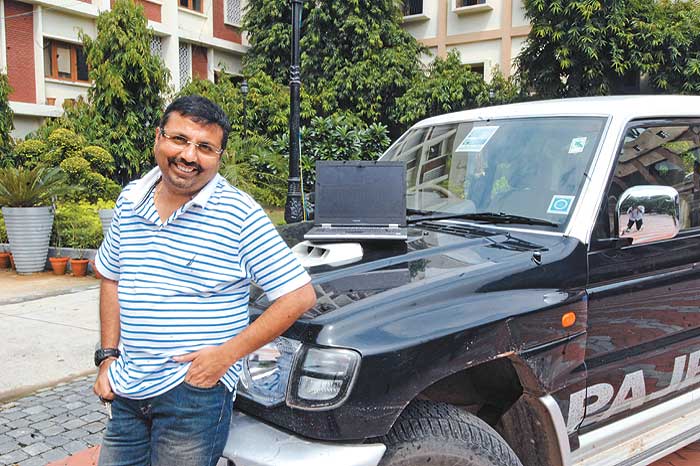 “As a concept, political management is a failure bcause the manager-politician is not considered a leader proper but a power-broker or manager.” Nishikant Dubey MBA, FMS, Delhi

“The level of debate in Parliament would improve if more educated people come into politics,” says 41-year-old Nishikant Dubey, first-time MP from Godda in Jharkhand. For Dubey, an MBA was the second choice, after the civil services. A ten-year stint with the Essar Group followed before he stood for elections. “Having been an activist,” Dubey says it was a natural progression. Stating “there is no real relevance of MBA practices in politics, particularly in rural areas where hardcore politics and not management is required,” Dubey says the real challenge is to generate support base.

“Both business and politics require similar management skills. The difference is there should be passion for public service in politics,” stresses Gowda. A member of the Congress, Gowda cites the example of how Union minister of state for commerce and industry Jyotiraditya Scindia is trying to understand the industry requirement when chalking plans to help them reduce export overheads.  He also cites how Union minister of state for IT and communications Sachin Pilot has been trying to revive the postal services and make it a tool for financial inclusion. And how Mangapati Pallam Raju, MoS for defence, is seeking to make the defence ordnance factories more efficient. Behind all these efforts is a knowledge of management strategy the ministers had picked up during their MBAs, or during later corporate exposure.

Also consider Balkrishna Khanderao Shukla, BJP MP, mayor of Vadodara, and a consultant. Apart from helping him deal with the many MNCs in the city, Shukla says his MBA has helped him serve up “innovations” in various development projects. Shukla has introduced the double-entry accounting system in the city corporation (any transaction above Rs 5 lakh now requires third party inspection by the state-run Engineers India Ltd). Also, new PPP projects are being rolled out for improving infrastructure, including roads in colonies. “Have you heard of housing societies contributing 50 per cent to the cost of building roads, with me contributing 50 per cent from my MPLAD funds?” asks Shukla. Whatever may be the shortcomings in Vadodara, in the last three years the city has won three national awards—for energy conservation, improving urban mobility and water management.

Abraham Koshy of IIM-A admits that lately there seems to be a trend towards a few management graduates taking up internship with politicians, “but this is more due to default rather than design in most cases”. Most leading parties, including the Congress and BJP, have wings manned by professionals who help to strategise policies, whether economic, monetary or industrial. The outcome is more positive “where professionals are allowed to work with political support and direction,” emphasises Koshy.

Many cite the example of how Indian Railways benefited under former minister Laloo Prasad Yadav, with management experts being provided the right political support to introduce innovation, whether in rolling out Garib Rath or lower-cost AC trains, handling of freight or redesigning stations for greater passenger amenities.
Or consider the in-the-news environment ministry, which grapples with varied issues navigating through different systems—politics, bureaucracy, civil society and people facing displacement. Varad Pande, a Harvard graduate in public administration, says the opportunity to work as osd to someone as experienced as Union environment minister Jairam Ramesh has been invaluable. “Theory is what you learn in school. Practically how you apply it in context comes with working with someone as experienced as my boss who knows how the system works,” says Pande.

There is, of course, a counter-view. Nirmala Sitharaman, BJP spokesperson, feels that business management taught here is based on western principles. How much relevance it has in India, particularly in politics or policy-making, depends on the local content in the course, which some of the IIMs are trying to introduce. But even here it’s a mixed bag. 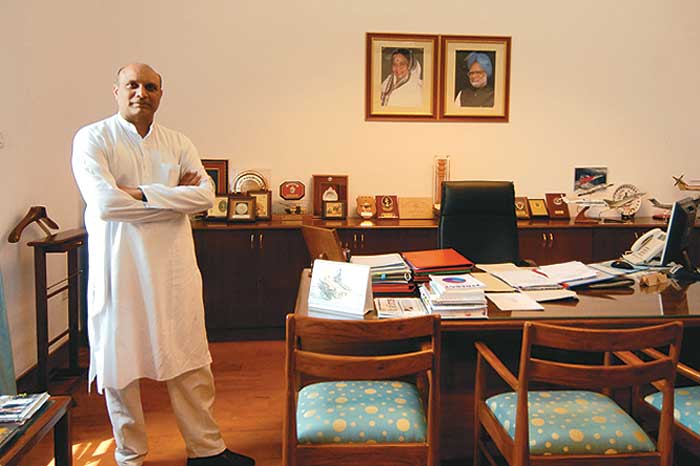 “In politics you are constantly trying to distribute resources for social needs but sometimes pragmatism has to draw the line to create national assets.” M. Mangapati Pallam Raju, MBA, Univ of Philadelphia

After a nine-year stint in the corporate sector, joining politics may not have been easy for this engineer and Temple University management graduate who says, “Having a successful profession has its own high”. In his current portfolio, Raju’s engineering mind helps him better understand the needs of how to improve production and if programme implementation can be improved by doing things differently. And management training—he is trying to improve operations of PSU factories—helps juxtapose the “social cost with the cost to the nation”.

Though many B-schools in India, like their US counterparts, offer courses in public policy formulation and politics, “whether these courses enable the graduates to deal with the ground realities of Indian economic and social challenges is moot—many lack the creativity, imagination and, above all, the willingness and ability to grapple with challenging social and economic issues,” admits Raghav Gaiha of the Faculty of Management Studies, Delhi University. A case in point is IIM-A having to shut down its public policy course as the “quality” of government managers was not up to the mark.

The differentiator then is the commitment towards public policy work and politics rather a management degree. As Rajya Sabha member and industrialist Rajeev Chandrasekhar puts it well, “There are some MBAs who go out of their way to equip themselves with the knowledge and skills to be more relevant in the public space”. The adage that an MBA does not make one a successful businessman applies in politics too.