Theories On A String

From an ISI angle to narco-terrorism, SIT's explored them all 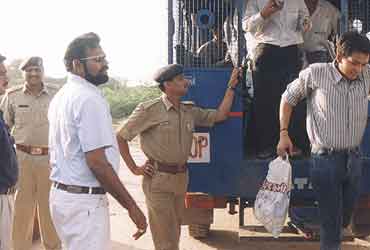 It has been eight chargesheets and three years of investigations since Gujarat simmered in the communal cauldron ignited by Godhra. But the Gujarat police's Special Investigation Team (SIT) probing the incident still does not have the material evidence to establish that there was a conspiracy behind the fire which left 59 dead. What it has, in the words of Special IGP Rakesh Asthana heading the SIT, is only "oral evidence".

This oral evidence is in the statement by prime SIT witness Zabbir bin Yamin Behera, who has already backtracked in the POTA court alleging he was coerced into making the earlier statement. POTA was invoked in the case after Behera's alleged disclosure that the conspiracy was hatched at the Aman Guest House near the Godhra station the night before. It was Behera who named Maulana Hussain Umarji, the man organising riot relief work in Godhra, as the brain behind the conspiracy. As many as 104 arrests were made under POTA in the case. Twelve have been released for lack of evidence while 13 have been granted bail.

Behera's disclosure is the SIT's version of what transpired. A person was apparently sent to the Godhra station to find out if the Sabarmati Express was on time (it was late by over four hours). Sixty litres of petrol was bought from a nearby petrol pump and stocked near the Aman Guest House. And then people (including Behera) went out in an auto with jerrycans of petrol, jumped onto the train, cut the rubber vestibule, poured the material on the floor, set the S-6 bogie on fire and jumped out. Interestingly, Behera's disclosures form the basis of the 10 questions the BJP has now raised before the Justice Banerjee committee.

According to a senior police official, the SIT clearly started the investigation with a pre-determined idea of establishing a conspiracy. All officers found lacking in proving this were shunted...