It was a state government report that prompted the yatra ban 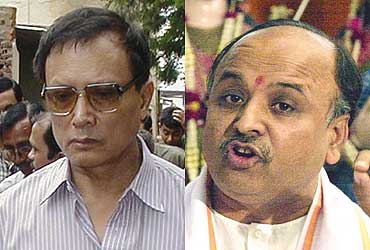 outlookindia.com
-0001-11-30T00:00:00+0553
Chief Election Commissioner J.M. Lyngdoh is once again directly in the firing line of the BJP and the VHP for banning the latter's proposed vijay yatra. But EC officials say its ruling was based on a report sent by the state's additional chief secretary (home), Ashok Narayan, on November 13. The report stated clearly that the yatra, if kicked off from Godhra, would "incite communal passions and create a law and order situation".

The brief report, based on state intelligence inputs, unequivocally states the yatra was a recipe for violence in an atmosphere already marked by communal tension. The report particularly points to the proposed "use of replicas of the S-6 coach of the Sabarmati Express that was burnt down by miscreants on February 27" which could foment trouble. The report reads: "There is every likelihood of communally-provocative and intemperate speeches being made during the course of the yatra." Narayan maintains that "the possibility of a law and order situation arising in the wake of the proposed yatra cannot be ruled out, especially in the wake of the recent incidents of communal clashes last week". He further said "the yatra would seriously jeopardise the law and order situation conducive for the conduct of free and fair elections in the state".

The report was submitted by the state home department following the EC's November 11 query to state chief secretary G. Subba Rao on the VHP yatra. It belies VHP general secretary Praveen Togadia's claim that no such report was ever despatched to the EC by the state government.

Losing no time, the EC shot off a missive to Subba Rao, directing him to prevent the yatra and the display of any images that could "fire communal passions". When asked what its response would be if the VHP defied the ban, sources close to Lyngdoh told Outlook: "We have asked the state government to stop the yatra. Now it is their job to do so and comply with our directive. That is all we can say."

Though fresh from his tour of both Rajkot and Ahmedabad, where Lyngdoh called the situation "nasty", the poll panel has this time around found some redeeming features in the situation. "After the tongue-lashing the last time around, bureaucrats and police seem to be responsive and have done some work in rehabilitating those displaced," says an EC official. With polls less than a month away, work is still on to update the electoral lists and locate almost two lakh voters who have either been displaced or have moved out of the state. One major reason for this partial change is that in the run-up to the elections all senior bureaucrats and police officials come under the purview of the EC.

Given the tense situation in Gujarat and the possibility of the situation getting out of hand, the EC has decided to send 25 observers to each of the state's districts from November 15. "All of them are from outside the state and they will keep a strict watch on developments and report to us," says an official. The next lot of 65 observers will be sent from November 23. In addition, 200 companies (20,000 men) of the paramilitary forces will be deployed across the state three weeks ahead of the poll. An equal number will be deployed from December 6.