Modi’s diplomatic stagecraft has only had modest success 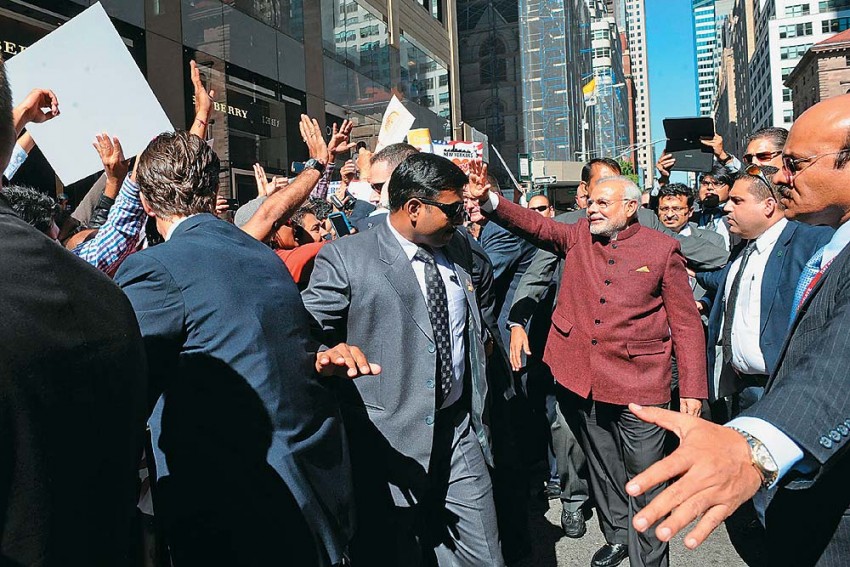 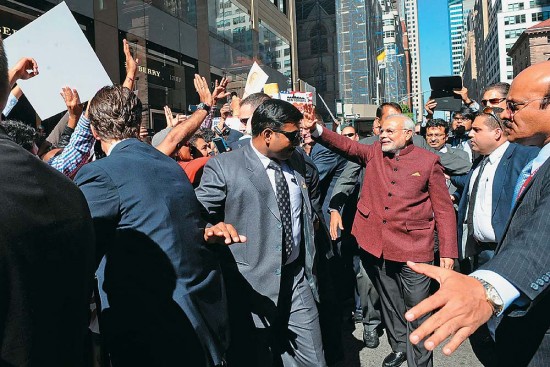 Prime Minister Modi’s five-day US trip ended on September 30. Images, rather than his words, linger, like Modi’s easy stroll past collected faithfuls at Palace Hotel, his visit to the 9/11  memorial, the Star Wars line “may the force be with you” at the Global Citizen Festival, President Barack Obama and him chatting at the Martin Luther King Jr memorial, the obeisance at the Gandhi Statue in Washington....

At times, diplomacy resembles theatre. For instance, J.F. Kennedy boosting West German morale with “Ich bin ein Berliner” or Reagan at the Brandenburg Gate beside the Berlin Wall, demanding Gorbachev pull it down.

With Modi, theatricality is integral to politics and diplom­acy. Drama has preceded and accompanied all his diploma­tic moves so far. For instance, the SAARC leaders invited for his swearing-in, including Pakistan; his visit to Nepal and Bhutan with extempore addresses to their parliaments, with an elaborate ritual at Pashupatinath; the start of the Japan visit in Kyoto involving Japanese rituals and prayers; commencing Chinese President Xi’s visit to India in Ahmedabad with a tour of Gandhi Ashram, and fin­ally the US visit. But talks have stalled with Pakistan, the Japan trip didn’t produce a nuclear deal and the Chinese visit was overshadowed by a lac stand-off. Reality often trumps stagecraft.

PM Modi’s US visit began with the UN General Assembly address, the fourth day of the high-level segment, when most important leaders had spoken and left. Thus, the audience was scanty, with mostly staffers in delegation chairs. The speech reiterated standard Indian positions on global issues, except the riposte to Nawaz Sharif, demanding he create conditions for a dialogue before seeking it. Modi also supported countering ISIS in West Asia, sought balance of interests in trade negotiations at the WTO, reiterated the old Indian mantra of “common but differentiated responsibilities” in tackling climate change and concluded by dem­anding UNSC reform by 2015. Sharif had opposed UNSC ref­orm a day earlier, aware that China, a sulking Russia and disunited UN members will ensure it does not happen.

Undoubtedly, parts of the Indian diaspora idolised Modi; many them supported his election campaign, which he ack­nowledged at MSG. The outreach dates from PM Vajpayee’s time. Modi merely consolidated it as UPA-II’s governance faltered. Indian governments formerly, however, maintained the links subtly, sensitive to much of the Indian diaspora being US citizens. Even the famed Jewish lobby operates without public fanfare.

PM Modi had different imperatives. The UNGA speech was to burnish his international credentials while his performance at the MSG was to reinforce his cult status, with some forty US senators and congressmen in attendance. The visa denial ghost had to be exor­cised. A New York court summons, handful of demonstrators and a recalcitrant anchor were mere irritants.

In Washington, Modi has restored momentum to a stalled Indo-US relationship and established a working equation with Obama. But their joint statement produces a mixed outcome. On trade, the $100 billion annual figure is to be inc­reased five-fold but the WTO standoff over India holding up the Trade Facilitation Agreement, unless its food-stocks issue is settled, is to be sorted out later. Same is the approach to US concerns over intellectual property. On energy and cli­mate change, while the EXIM Bank has extended a $1 billion credit line for renewable energy product imports, the liability issue in civil nuc­lear energy cooperation ­is unresol­ved.

Counter-terrorism cooperation sugg­e­sts ‘joint and concerted’ efforts to dis­mantle safe havens and tactical and fin­­ancial support structures of groups like Al Qaeda, LeT, Jaish-e-Moh­am­med, Haqqanis and the D-company. The safe havens being lar­gely in Pakistan, it is unclear how joint operations can be conducted in view of close US-­Pakistan ties. On ISIS, it appears both sides agreed that Indian help is best tendered clandestinely.

The US reiterated its support for UNSC reform and the Ind­ian candidature for permanent membership, as also reform of global financial institutions. These are statements of intent, heard in the past too. All told, the Obama-Modi parleys have cleared some mutual doubts. An ambitious list of new projects would falter unless followed up. PM Modi conceded in his press statement that policy and process reform is overdue. His admirers abroad and voters at home shall soon demand delivery. Failing that, as Henry Kissinger says in his book On China, joint communiques have a short shelf life. “They define a mood,” he adds, “rather than a direction.”

Festoons On The Hudson