At home with commercial slapsticks as much as with ­nuanced indies, Sanjai Mishra is a heart stealer 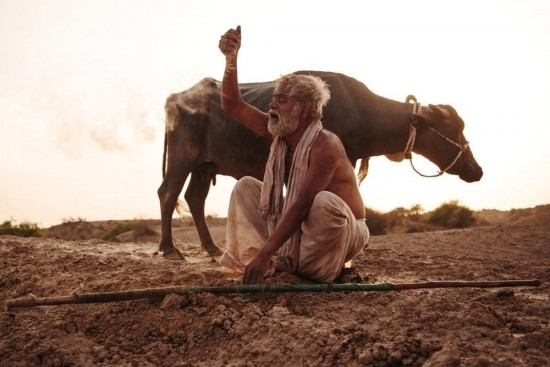 Straddling the diametrically opposite worlds of popular and offbeat cinema is an art tricky enough even for a veteran actor to perfect. But versatility comes in handy for Sanjai Mishra, who does the balancing act between the two extreme poles with the expertise of a trapeze artiste.

On one hand, Mishra is completely at home mouthing inanities through a loud character in a comic caper of Rohit Shetty; on the other, he is equally at ease portraying a sensitive elderly man in a Manish Mundra production—a feat few of his peers are able to pull off with such conviction. The NSD alumnus now braces himself for yet another litmus test of his acting prowess with Kadvi Hawa, arguably the most important movie of his career, releasing on November 24.

Directed by Nila Madhab Panda of I Am Kalam (2011) fame, it is being touted as the first Hindi movie to have tackled such a theme, in all its stark manifestations, through the central character of Mishra, who plays a 70-year-old visually-imp­aired man living in an arid zone who ­experiences how the air he breathes has turned from being a life-saver to highly toxic in his lifetime only. A still from Ankhon Dekhi

The thought-provoking movie comes barely a month after Mishra grabbed eyeballs in Shetty’s blockbuster, Golmaal Again. Anybody not familiar with his filmography or, for that matter, his range of histrionics, may marvel at the way he makes a seamless transition from a crass commercial potboiler to an indie movie. But that is not out of the ordinary for an actor accustomed to getting into the skin of all his characters like a thespian ­extraordinaire. Still, Kadvi Hawa comes under a special category for him.

“It’s a film that deals with the issue of climate change for the first time,” Mishra tells Outlook. “And when something is done for the very first time, it feels special to be part of it. I am fortunate to do it and want my kids to see it to know that their actor-father has done something positive in his career.” 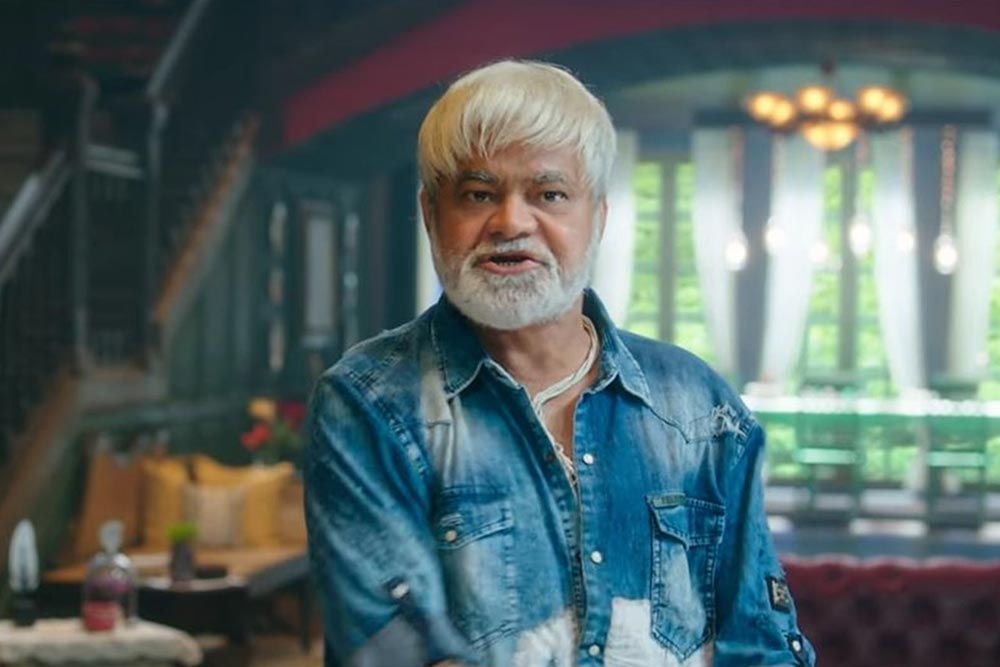 A still from Golmaal Again

The 52-year-old Bihar-born actor, who grew up in Varanasi, hopes that his new film will create awareness about the rapid environmental degradation. “It is unfortunate that the situation has come to such a pass that we have to inhale kadvi hawa (toxic air) today.” he says. “I am not a pessimist but shouldn’t we talk about the issues which have landed us in this tight spot? I think the audience should feel the anger about the whole thing.”

The movie, which earned a special mention at the national awards this year, juxtaposes the predicament of two protagonists, played by Mishra and Ranvir Shorey, who are bearing the brunt of climate change in their respective regions—one in the form of acute drought in Bundelkhand, another owing to cyclones in coastal Orissa. “We talk about jaatiwaad (casteism), this waad (-ism) and that waad, but nobody talks about hariyaliwaad (greenism),” he rues. “Unplanned cities have mushroomed everywhere. People used to live amidst trees in the past, now trees live amidst humans in concrete jungles. Who’s to be blamed? Why can’t the abundant water resources of Bihar be diverted to the parched areas of Rajasthan? Why can’t rainwater be stopped from flowing into the oceans and harvested properly to mitigate the woes of suffering people?”

The scenario wouldn’t have been so grim, feels Mishra, had the city planners shown some vision. “Even in a small Jharkhand town like Lohardaga, I could only see concrete during my recent shoot there,” he says.

But the actor, who won a Filmfare award for Ankhon Dekhi, asserts it is not merely for the artistes but for everybody to ponder over the ramifications of ­climate change. “There is a lot of talk about smart cities these days but what we need is a smart mindset. We suddenly start discussing cleanliness without ­realising that such things ought to be taught at the school level? If children are not ­apprised about noise pollution they will all grow up honking horns on the streets,” he states.

Nevertheless, what is heartening for actors like Mishra is that several content-heavy films are being made these days. “Many big production houses earlier had an obsession with love stories. But how long can you go on telling the same old tales? Dramas happen in the lives of people from other age-groups as well,” he says. “Love stories have already run their course, from the era of K.L. Saigal right up to Aamir Khan’s time.”

Mishra attributes the reason for it to the “politics of content” that has been prevalent in the industry all these years. “It was always spouted that the public, especially the younger generation, likes such subjects, but things are changing for better now. Many teenagers have told me how they liked Ankhon Dekhi even though it ­revolved around an aging man,” he says. “I think it is the content that makes a star now. Actors are secondary to their ­characters in such cinema.”

“One day I ran short of money and started ­working as a cook, but hardly a day or two into my new job people ­started recognising me.”

Citing his own example, Mishra says many people don’t know his name even now but they remember the characters he has played. “I am not a star surrounded by four commandos who is presented like ‘here comes the Sanjai Mishra’ but I am glad to have ­attained recognition because of my characters, not my name.”

Son of an information bureau official, Mishra did not have a smooth ride on the road to success. It took nine years of toil before his talent got its due. Two years after passing out from NSD in 1989, Mishra landed in Mumbai at his father’s prodding to try his luck in films but he remained without work for long. “I did not get work for nine years, except for odd ad films or small roles in movies like Satya and Dil Se. “It was only after nine years that I got the ESPN offer to play Apple Singh, the sports channel’s mascot for the 1999 cricket World Cup. And then came the turning point in a television series called Office Office that helped me grow and hone my skills,” he says. “It paved the way for film offers even though I had to prove at every step of the ladder that I could climb up.”

With subsequent roles in the Golmaal series and indie films, including two of his favourites—Aloo Chaat (2009), Saare Jahaan Se Mehnga (2013)—he est­ablished himself as a fine actor, but ­before he could savour the fruits of success, a big setback lay in store. “In 2009, I took seriously ill and spent about a month in hospital. Death stared in my face but I survived. Only 15 days after I was ­discharged, my father passed away. I couldn’t comprehend why the destiny had wished to change the script, putting my father in my place at the last minute,” he recalls. A father in Masaan; a comic-villain in All The Best; a ­gangster in Phas Gaye Re Obama

Shattered over his irreparable loss, Mishra went into a shell, far from the glamour world, and sought solace by the Ganga, near Rishikesh. But destiny had other ideas. “One day when I ran short of money, I asked the owner of a local dhaba if he could hire me as a cook but hardly a day or two into my new job had passed when people started recognising me there,” he says. “Seeing people take selfies with me, my elderly employer wondered what kind of servant he had hired. It was at that juncture that I was informed that Rohit Shetty was looking for me for All the Best (2009). Since my father had also wanted me to return to work quickly after my illness, I came back to face the camera all over again. And now, here I am.”

Mishra thinks it is because of his long struggle that he is able to do films like Kadvi Hawa. “It was a learning experience. I am able to do such movies only because of my experience, including my frustration over not being able to get work in those days. Had I got work easily then I would not have been able to do something like this,” he admits.

Such an outlook towards life also helped him stay grounded when he eventually got fame. “I will never let stardom get the better of me as an individual. I have already turned 52 and given the average life span of an Indian, I have about 20-22 years left. I, therefore, want to enjoy for the rest of my life,” he says.

Mishra says that like anybody else, he needs work but he is now in a position to be choosy. “If a role is interesting enough, howsoever small in length, I will still do it.” Although, at no cost will he do anything that will prevent him from living his life to the hilt, he reiterates. Mishra still prefers to travel by train as it helps him stimulate his thought process. He stops by to pick fresh vegetables from the roadside vendors and even cooks food while on outdoor locations “Of course, I am busy in work but I still lead my life with no attitude. Apni zindagi jee raha hoon. Had I been only doing work, I would have been like a television actor who has to work round the clock without enjoying his other life.”