The Yielding Bastions: For A Fairer Deal

By varying routes, nations worldwide are opting for women's quotas in parliaments

More from Aman Singh
View All

Indian political parties, much exercised over quota for women in Parliament, should know that reservation for women in legislative bodies is increasingly the global trend. Men are giving way to women, and they are adopting different methods of doing it. One way is a reservation in parliament itself, as proposed in India, which has introduced a bill seeking to reserve 33 per cent of seats in the Lok Sabha and Rajya Sabha. The other is a reservation that parties introduce, either voluntarily or by law, in the number of women candidates they field in an election.

"Ninety countries have some kind of quota," Julie Ballington, researcher at the Gender Partnership Programme of the Geneva-based Inter-Parliamentary Union (IPU), told Outlook. "That's half the countries of the world. Those that do the worst have no quota." The trend is towards more and more countries implementing quotas, she said. "On one level you might have a political party adopting its own informal quota—in the UK we saw that happening with the Labour Party—on the other level you can have a legislative quota. You can see combinations of those in different countries."

But there isn't one ideal model. Quotas haven't worked in some countries, others have done fine without them. Iraq, Afghanistan and Pakistan have a far higher proportion of women in their parliaments, but it is nobody's case that the position of women in these countries is better than in India. Women members of the Iraqi parliament can do little if it isn't safe even to move out of the house. Quotas in Iraq and Afghanistan are dictated by the US, which otherwise has little hesitation in bombing and killing civilians, women among them. 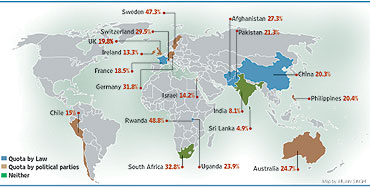