Our cricketers may have lacked the killer instinct elsewhere. But many, like Pataudi, liked a hunt. 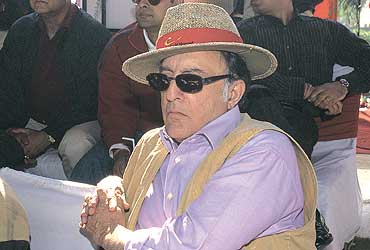 outlookindia.com
-0001-11-30T00:00:00+0553
This is not the first time Mansur Ali Khan Pataudi has been in trouble over hunting. In 1997, he and his wife Sharmila Tagore reportedly shot some 100 migratory birds in Kashmir's Hokersar wetland. No case was filed because they had sought and got permission for the hunt. They were in Hokersar at the invitation of Farooq Abdullah, the then chief minister of Jammu and Kashmir. In fact, Moulvi Iftikhar Hussain Ansari, a minister in the Abdullah cabinet, had escorted them. Says animal rights activist Maneka Gandhi: "Farooq Abdullah saved him then, at another time it was K.C Pant." And the folks at Jhajjar, Haryana, talk of the self-confessed "65-year-old" as a regular at the shikar.

Pataudi's former teammates at cricket do not condone the Jhajjar incident, although they have memories of the days he used to take them all out for hunts. Of course, this was the '60s and early '70s—the Wildlife Protection Act came into being in '72 and environmental awareness was just setting in.

Those team hunts, they recall, formed the backdrop for elaborate pranks. One evening in the early '70s, some cricketers who'd driven out from Bhopal on a Pataudi-led hunt were getting a bit restive. They had been driving quite a while, not spotted any animal and the only things they'd shot at were some empty beer bottles. As they prepared to head back, armed bandits swooped down on the party. G.R. Vishwanath was tied to a tree. Word has it that little Vishy was in tears but one senior cricketer who was in the know gave the game away by bursting out laughing. The bandits were actually staff from Pataudi's Bhopal palace.

Apparently, it was not the first time Pataudi had done this. Another time the prank was on Vijay Manjrekar. On that occasion, there was no one to give the game away and to his last day, Manjrekar is said to have believed that the bandit attack was real and not stage-managed.

Pataudi is not the only Indian cricket captain to enjoy a hunt. C.K. Nayudu, India's first Test captain, was known to favour the shikar. But others have come away shaken. More than a decade-and-a-half ago, Navjot Sidhu was on a hunt near Patiala when his friends killed a pregnant animal. It was a defining moment in his life and he gave up hunting—and turned vegetarian. Now, will the Tiger eat grass?