Home  »  Magazine  »  Society  » kerala: heritage »  The Worth Of Eternal Repose

The Worth Of Eternal Repose

The Padmanabhaswamy temple is suddenly the richest in the world. Who will have a say on its untold treasures? 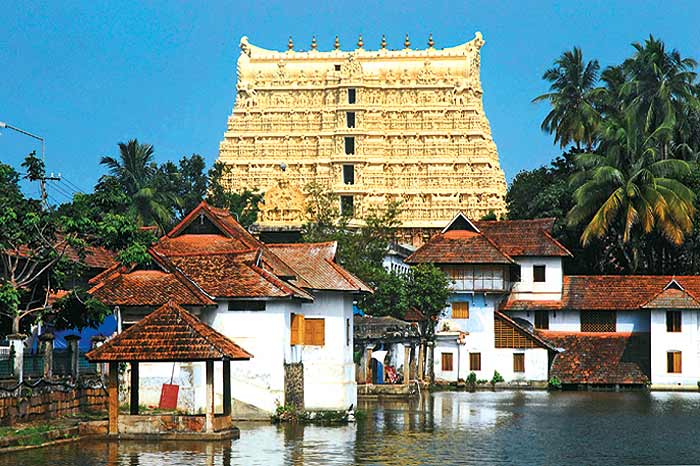 Keep The Shine On

The quiet in the ancient precincts of the Sree Padmanabhaswamy temple is unperturbed even as a media storm brews on the outside. The fabulous wealth within its vaults or the large posse of policemen present do not deter the white mundu- or sari-clad devotees from their religious duties—they go about their prayers calmly, oblivious of the clatter of TV crews. But the treasures that are tumbling out of the six kallaras (vaults) can unnerve even the hardiest of spiritual men. One person who saw the treasure of the ante-chamber of Vault A could not stop shivering even at the end of the day.

There are bagfuls of diamonds and rubies, there are ancient gold rice trinkets and crowns, there are gold statues of Mahavishnu, there’s an 18-feet-long gold chain, a thousand other gold chains, ropes made of pure gold, staffs, golden coconut shells. There are hundreds of kilos of raasi (Kerala’s first indigenous gold coin), coins from the Napoleon era belonging to the early 19th century, Venetian gold coins called ducats from the 17th-18th century. As someone said, there seems to be more riches stuffed in the temple vaults than even stories from the Arabian Nights could conjure.

Whose treasures are these? Why were they stacked up in the temple’s vaults? “The sacks of diamonds, rubies and emeralds were probably purchased by the kings or were given as gifts by traders visiting these parts from all over the world,” says archaeologist S. Hemachandran. He says in those days precious metals and jewellery were stored in copper vessels but perhaps because of the corroding nature of copper, sacks were used to hold the gems. Shreekumar Varma, novelist and grandson of the last queen of Travancore, Sethu Lakshmi Bayi, says, “It was always known that there was much accumulated wealth in the temple but no one knew how much. There was a ritual practised formerly that before the coronation of a king, the gold would be brought out and the king would immerse himself completely in the gold and become ‘ponnuthampuran’ (golden chief) and only then would he be considered fit to be king. This ritual was put to an end by Raja Moolam Thirunal” (who reigned from 1885-1924). So far, there have been wild estimates of the value of the treasure, ranging from Rs 1,00,000 crore to even 10 times that (see box).

The temple has six vaults, A-F, of which five have been opened so far. When the first vault was opened, it was found to be practically empty. On a hunch, the members opened an ante-chamber inside, and out tumbled sacks of diamonds and rubies, tonnes of gold. Some sources say there may be more ante-chambers within the vaults. A Supreme Court-appointed seven-member panel is now tasked with the arduous exercise of inventorying the temple’s treasures.

It all began with a petition by former ips officer T.P. Sundararajan who had moved the courts to have an inventory done of the temple treasures. He now says he is happy with the net result though the methods adopted in inventorying could have been better. “The inventory taken on the basis of weight is substantially correct though not fully accurate. But I am satisfied that the treasure is being put back into the vaults and sealed,” he says.

What made Sundararajan, an IB officer during Indira Gandhi’s rule, go to the courts with his demand? Sundararajan gave up the ips when his father became blind and came to live in their ancestral home, a stone’s throw from the west nada (door) of the Padmanabhaswamy temple. He would take his father daily to the temple, and soon he too became an ardent devotee. Today, the septuagenarian spends close to eight hours in the temple, starting his day at 2.30 am. Sundararajan, like many in Thiruvananthapuram, was always aware of its treasures. Much of the ancient offerings and donations to the temple are maintained in the matilakam records (written on cadjan or palm leaves) of the temple which date back to the 14th century. Many of those records are now said to be lost while some are preserved in government archives. Sundararajan was afraid the temple trust under the control of Sree Uthradom Thirunal Marthanda Varma, younger brother of the last ruler of Travancore, did not have the wherewithal to protect the temple treasures.

After Independence, all the major temples under the control and management of the erstwhile princely states came under the control of the Travancore and Cochin devaswom boards. But, under a special covenant, the administration of Padmanabhaswamy temple continued to be with the last ruler of Travancore, Sree Chithira Thirunal Balarama Varma. The Travancore Cochin Hindu Religious Institutions Act, 1950, says “the administration of Sree Padmanabhaswamy and Sree Pandaravaya properties and all other properties and funds of the said temple are vested in trust with the ruler of Travancore”. In 1971, the privy purse was abolished which took away the term ruler. Balarama Varma passed away in 1991. In 1993, a constitution bench ruled that any treaties, covenants, assurances entered into by the rulers of the erstwhile princely states and the government of India were void. “The question of the legitimacy of the royal family as the controlling trustees of the temple under Sree Uthradom Thirunal Marthanda Varma, present head of the Travancore royal family, came into play,” says Anand Padmanabhan, counsel for Sundararajan. In 2009, Sundararajan appealed to the high court and later the SC for an inventory of the temple to be duly prepared. In May this year, the apex court appointed a seven-member panel to prepare the inventory and on June 27 the first of the vaults was opened.

As the complex process of evaluating the wealth carries on, the question on everyone’s mind is: who does the treasure belong to? “It’s very significant that the vaults were locked for over a hundred years and all the wealth preserved because, unlike the kingdoms of the north, the lifestyles of the Travancore kings were simple, without any ostentation,” says Shreekumar Varma. “The kings were Padmanabhadasas...I feel the wealth belongs to the royal family. It has been administering the temple for so long without any problems...the family is devoted to the god.”

“Unlike the kingdoms of the north, Travancore’s kings led simple lives, which is perhaps why the treasures survived.”

There are all sorts of views on this; the conservative one veers towards favouring the status quo. Historian M.G. Sashibhushan, who has been following the Travancore royal family for many years, says, “The Padmanabhaswamy temple is the life and breath of the royal family. The treasure should remain with the temple and the royal family be allowed to administer the temple’s affairs.” But if it belongs to the royals, won’t they have to pay wealth tax? “Charitable institutions are exempt from wealth tax,” says chartered accountant Goda Varma Raja. “Technically, the wealth belongs to the deity. The royal family will never touch even a bit of it.” Kerala chief minister Oommen Chandy has also been quick to say the treasures will not be removed from the temple. But finally it’s the court that will decide who the treasure belongs to. Right now, the top priority for the government is to safeguard the riches. “There is a three-tier security system in place—the outside perimeter, the inner perimeter and electronic surveillance. We are factoring in all types of exigencies and have formed a quick response team too,” says additional dgp Venugopal K. Nair, who is in charge of temple security.

The next step in this fascinating story is the opening of the sixth and final vault—the mysterious kallara B. What lies inside it? The last vault has become controversial because the underground chamber is said to lie directly below the deity and it is considered the most sacred of all the vaults. The city of Thiruvananthapuram is rife with rumours that if the doors to the vault are opened, a terrible curse will befall the city, and those who open the vault will perish. Some recall the old folklore that there are deadly snakes inside ready to attack anybody who tries to get in. Another story goes that the door of this vault opens into a secret passage that runs underground, a tunnel large enough for two people to walk through, right up to Kanyakumari.

When the Supreme Court panel tried to open this vault last week, they found an iron door that did not yield to any key. A gas-cutter may now have to be used to open this door. But this method is deemed inappropriate because it will disturb the sanctity of the temple and the authorities are not willing to allow this to happen. The panel members are sure to try to open the vault again very soon. Will it yield even more riches, will it unleash a plague, what is in store for Lord Padmanabha’s city?