The World In A Bhetki Paturi

There will never be a clear settlement to the age-old arguments about Dhakai and Calcutta cuisines. But Kasturi certainly holds its own in the heart of Calcutta... 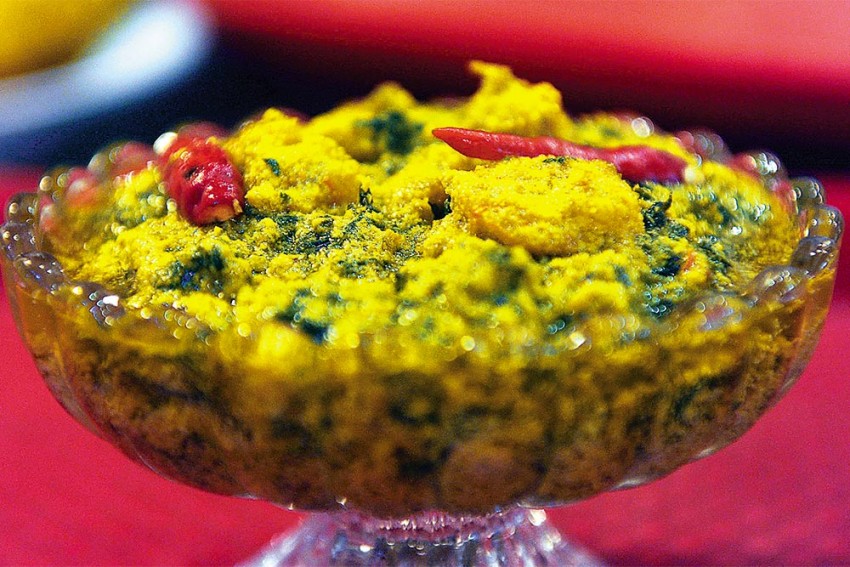 It’s a soft, salubrious Sunday. We are travelling through Calcutta and our cousin Anita Mansata, an interior designer and artist, who in fact did up the restaurant 6, Ballygunge Place in its earlier avatar, offers to take us for a Bengali lunch. We discuss Bhojohori Manna, Kewpies and Taro Parban, but generally veer towards Ballygunj, to No. 6. There is a traffic jam on the road leading to it, when Anita spots another one and exc­laims, “Hey, how about Kasturi, do you like Dhakai cuisine?” We decide to go for it.

There are a few families waiting outside the restaurant. The man at the gate says it will take about half-an-hour to get a table. We ask for a takeaway menu, a busy three-fold in small print, to shortlist some of the must-haves.  “Think let’s have a pomfret fry and maybe posto bora?” The lady from one of the families, in a rustling, rust-coloured cotton sari, shakes her head. “If you are going for a fish fry, the bhetki is better,” she offers. “Okay, yes, what would you recommend as the main course?” we ask. “My favourite is the shaak kochu chingri (spinach and shrimps) and the steamed bhetki in banana leaves,” she says. “But if they are having bhetki fry, the steamed pabda may be better,” her friend joins in. “Yes, that’s true. You can have the hilsa too, but the last time it was too thorny,” says the first lady. “The prawn malai curry is also excellent,” her friend marks it on the menu with a pen borrowed from the man at the gate.

They also mark the shukto, the Dhakai fish pulao, shona muger dal with peas and the kosha mangsho. We thank them, but as it can happen only in Calcutta, when they are out of earshot, ano­ther lady, in jeans, top and large shades, who has been listening in on us, sidles up and says in a low voice, “I wouldn’t recommend the fish pulao or the kosha mangsho. This is not a biryani kind of place and the mutton can be quite oily.” Sure, what would you suggest? “You must have the chicken bharta, you know, they first cook the dish with chicken and the masalas and then mash it up to a mince,” she says, her eyes lighting up. Her companion, in creased trousers and a golf cap too joins in: “The cutlets are divine too, fish or shrimps. But if it’s getting too seafood-heavy, the mutton cutlet is terrific.” We thank them. Anita has also worked up a couple of her WhatApp groups and messages are now pouring in a torrent. Obviously, all this can’t be for one meal—we zero in on the common dishes but even that would be a Homeric repast.

It’s such a delight to get into a buzzing eatery. The decor is just comfortable tables and chairs but the ambience is waves of spicy fragrances, food chatter and busy waiters. The steamed bhetki paturi (the waiter rules it over the pabda) is creamy and melting. Many times the mustard-coriander paste would separate from the fish as you open the banana leaf, but here it blends perfectly. The shaak chingri is a superb pairing of greens and seafood. The fried pabda is crisp, the marinade reaching every bone. The chicken bharta is pate-like, spicy, tangy and pasty, great with luchi. The prawn malai curry is a bit insipid, the gravy too red (as opposed to the yellow-white of Bhadralok kitchens) and too watery, the overcooked prawns sinking to the bowl’s bottom. The shukto is better at Bhojohori Manna, where we had eaten two days ago.

There will never be a clear settlement to the age-old arguments about Dhakai (or, more generally, East Bengali) and Calcutta (West Bengal) cuisines (‘Ghoti’-’Bangal’, spicy-sublime, greasy-easy and so on). But Kasturi certainly holds its own in the heart of Calcutta, with enough passionate patrons.

Goodbye Is Just Another Signal: Let The Shots Flow