...The Word Reached The Fields 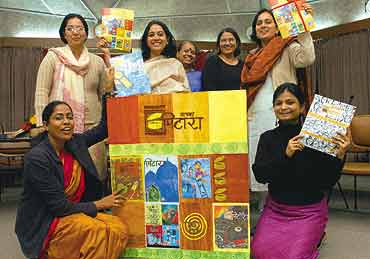 outlookindia.com
-0001-11-30T00:00:00+0553
Pitara: a basket of goodies? A treasure chest? However you translate it, the image of an ordinary-looking container for extraordinary things is a perfect title for a pioneering Hindi magazine that celebrates its 75th issue this month. For literate adults, there’s nothing more ordinary than the act of reading: we do it unconsciously almost all the time.Yet, if you stop to think, the act of reading is a truly extraordinary act. Try to imagine your normal day without this ability. The place where you live becomes a foreign country: it’s as though you have lost a limb, or your eyesight.

Eleven years ago, when the Total Literacy campaigns were at their peak, a group of five women—Renuka Mishra, Jaya Sharma, Farah Naqvi, Malini Ghose and Dipta Bhog—decided the only way to keep new readers reading was to give them material they actually, actively, wanted to read. Out of this simple idea, Pitara was born.

The women founded a Delhi-based collective, working on issues related to gender and education called Nirantar and, with Pitara, their aim was two-fold. Firstly, they hoped to provide high quality, simply written, interesting reading material to a poor, largely rural community to help them develop and keep up their reading skills. And secondly, the information would take its readers beyond their immediate surroundings or, at the very least, enable them to see their environment in a new light.

Jaya Sharma has been with Pitara since its inception. "Pitara aims to respect its readers. After all, urban literate readers like us enjoy reading different things. Why shouldn’t rural readers want the same? So we include local news and international politics, alongside fiction, jokes, feature articles," she says. They’ve also brought out special issues on Kashmir, Dalit women writers, and fiction specials.

Malini Ghose explains the special place that Pitara has in the heart and minds of its readers: "Where else can they read an article about the geographical features of Iceland, the politics of the Narmada struggle, a story by Ismat Chugtai and an article on cloning? Just because someone is poor, rural and a woman doesn’t mean she only wants to read leaflets on reproductive health."

According to the National Readership Survey, ’05, 293 million people in India don’t read any publication. Official figures peg the national literacy rate at around 65 per cent, but this percentage plummets when it comes to rural areas, and especially the female populace. "The government claims to be teaching people to read—but what are they doing to sustain their literacy?" asks Dipta Bhog.

Given the prevalent illiteracy, Pitara seems like a drop in the ocean. And yet, even drops create ripples. Listen to Mohanmati, an 85-year-old woman of Gadgodi village, Bilaspur district, Chhattisgarh: "My daughter’s father-in-law, the local postman, is the first person to read my copy of Pitara. It then goes to his daughter-in-law. After she has read it, she gives it to her husband, he to his brother, and only then I get to see my copy." For the team at Nirantar, the bimonthly is at the frontline of the debates raging around the Right to Information Act. "Such an act is meaningless if it’s only for a few in the metros filing affidavits. Pitara’s all about the politics of knowledge, the politics of information: what kind of knowledge? And who is able to access it," says Malini Ghose. "Funding is a constant struggle," says Farah Naqvi, "as is finding suitable distribution channels. For our poor, rural readership, there’s simply no culture of subscription." Pitara’s strength lies not in the fact that its readership is 30,000, but that this figure is qualitatively varied—including neo-literates, teachers, activists, rickshaw pullers, college students and those learning Hindi as their second language. A feminist magazine that’s not just read by women; a magazine produced in Delhi that’s not just targeted at urban readers.

Saga Of A Lake