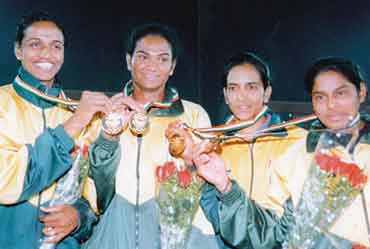 When Andhra Pradesh walked off with some 400 medals at the 32nd National Games in Hyderabad last December, it seemed chief minister Chandrababu Naidu's vision of a Swarnandhra Pradesh had come true. Five months later, Naidu's dream seems to have soured: nine of the state's medal-winning athletes—out of a total of 22 from around India—were caught doping. And then a medal-winning athlete, who tested positive for drugs, came out and blamed the pressure the state put on its participants to win.

P. Udaya Laxmi, a seasoned campaigner for Andhra Pradesh and winner of two gold medals and a bronze, claims officials pressured athletes to win medals at any cost. "Without medicines, one can't win so many medals. So they told us to do whatever is necessary to win. They told us dope tests were nonsense and they would take care of it," Laxmi told Outlook. Having tested positive for the muscle-building and endurance-boosting nandrolone, she has been provisionally suspended by the Amateur Athletic Federation of India. Andhra's tally on this dubious podium of dopers also include two other track-and-field athletes, three boxers, a cyclist, a rower and a weightlifter.

Sports officials are unfazed despite Andhra turning up the largest number of disgraced athletes. They dismiss Laxmi's allegations as the desperate words of someone who has been caught. "If we were encouraging doping, why would we be the first state sports authority to invest Rs 25 lakh in importing dope kits to ensure a drug-free competition?", asks L.V. Subramanyam, managing director and vice-chairman of the Sports Authority of Andhra Pradesh.

Officials claim that contrary to Laxmi's charge, the athletes were repeatedly warned there would be widespread dope tests and brochures and pamphlets cautioning against prescribing and consuming prohibited substances were given out.

However, while sports officials are publicly distancing themselves from drug-tainted athletes, some admit in private that several athletes may have been lulled into believing the officials would shield those from the host state. In the last edition of the games held in Punjab, a number of tests were conducted, but despite rumours about several athletes testing positive, their names were never made public. "The problem lies in the fact that almost all our athletes consume banned substances but earlier they were never caught. Everybody is involved," says Dr S. Bakhtiar Choudhary, specialist in sports medicine and a former consultant to several national teams. He says junior athletes are "most vulnerable to the ill-advice" from their seniors, so drug testing must begin at the junior and sub-junior levels.

Looking beyond the blame game, this controversy has once again turned the spotlight on the fact of states upping the stakes with monetary incentives for big game winners (see box on AP's figures). It also brings under scrutiny AP's policy of aggressively poaching medal-winners from other states by dangling incentives.

But Subramanyam points out these incentives are not new and have been in place since 2000 when Andhra became the first state to come out with a clearly documented sports policy. But with six of the nine athletes testing positive from Andhra being not originally from the state, this has raised doubts about the ethics of luring athletes with monetary incentives.

To be sure, money was not lavished on the athletes alone. An estimated Rs 250 crore was spent in transforming the usually staid National Games into a mega event with laser shows, pyrotechnics and celebrities as much a part of the event as records and athletes. Naidu treated the games as a milestone in his larger plans for transforming Hyderabad into the most happening city in the country.

While playing for such high stakes, it was but natural to expect a shining performance from the state's athletes."After spending almost Rs 3 crore on our athletes, we obviously wanted to see results," says K. Rangarao, secretary, AP Amateur Athletics Association. But at what cost?