The Wine After Hemlock

Hope comes to the Valley, borne on the warm sunshine of the Indo-Pak thaw 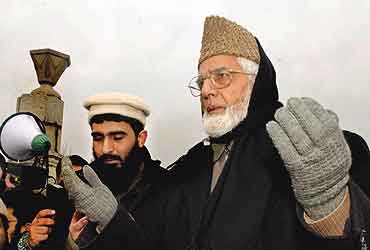 outlookindia.com
-0001-11-30T00:00:00+0553
Hajira, 78, is the matriarch of a large family in downtown Srinagar. She always admonished children watching TV. It's plain waste of time, she'd tell them. Last week, though, Hajira's eyes were swollen red, glued as she had been to the idiot box. She found the TV images from Islamabad mesmerising. The family's young ribbed her: what are you watching, fashion show? Hajira would poignantly reply, "I've lived in misery. But from what I have seen on TV, I think you could have a secure future."

Hope was the first casualty at the time the guns first began to rattle in the Valley. It has now magically reappeared in Hajira's life, in the homes of thousands who on their TV sets tracked the news as it happened in Islamabad. From saarc ceremonies and grandiloquent speeches to the announcement of an Indo-Pak joint declaration, they didn't miss a moment. Some even cried. Says Mushtaq Ahmad, 48, whose younger brother died in the violence that has racked the Valley for the past 14 years, "Kashmir is the barometer of Indo-Pak relations. And if this barometer indicates that the storm has already passed, can there be a better reason for Vajpayee and Musharraf to pat each other's back?"

Make no mistake, hope here is still smeared with blood. Separatist violence hasn't abated; bullets still fly around with names of the innocent etched on them. But the air smells different; the change in the mood is palpable. And it is contagious, affecting moderates and hardliners alike. They feel an Indo-Pak dialogue is inescapable, that a solution to the vexed issue isn't too far away. Missing is the pathological cynicism with which Kashmiris would greet all attempts at ushering in peace. Says college teacher Sajad Ahmad, 46: "The cynics are showing signs of getting cured. I seriously believe the peace moves are for real. That means our trauma could be ending now."

You find optimism everywhere. Says former chairman of the All Parties Hurriyat Conference Prof Abdul Ghani Bhat: "I feel leaders in India and Pakistan have started seeing the hearts and minds of their people, instead of just the geographical boundaries. Once there is the sincerity and the will to discuss issues, even the most difficult problems throw up solutions. I am confident that the defining moment in the history of the two countries has come. No. This in itself is a historic moment."

Hurriyat chairman Moulvi Abbas Ansari is upbeat. "It has been our proclaimed stand that there can be no forward movement towards the resolution of the Kashmir problem unless India and Pakistan show fortitude and maturity. It is now clear that Vajpayee and Musharraf have agreed to jointly brave all the odds and exhibit that crucial fortitude without which Kashmiris would continue to stew in their own soup."

With the thaw in Indo-Pak relations, the spotlight will now be trained on a proposed dialogue between the Hurriyat and deputy prime minister L.K. Advani. Last week's momentous event should provide a fresh impetus to this internal process. At the moment, the Hurriyat is waiting for a formal invitation from New Delhi. As Ansari said, "Once we receive a formal invitation, we would definitely talk to Advani."

Hope has also introduced a new element in the intense competition among both mainstream and separatist politicians. NC's Omar Abdullah was first off the block, welcoming the joint declaration and declaring that the proposal to open the Srinagar-Muzaffarabad road link was mooted by his party decades ago."We've always maintained that a composite dialogue between India and Pakistan must be preceded with confidence-building measures and that has been vindicated," he said.

CM Mufti Mohammed Sayeed's smile was the widest. Last week's breakthrough could ease his task of governance considerably. The Mufti preened: "For me it has been a matter of faith. I've always said there's no escaping from the fact that we must talk. I've said the road links must be opened so that divided hearts and minds are united. I've always said that 'Bandook se na goli se, baat banegi boli se (It shall neither be through guns nor bullets, matters can only be resolved through dialogue)'. I'm happy everybody has now started catching up on that line."

The joint declaration, overnight, has given respectability and credibility to the middle path. And hardliners too have suddenly discovered the virtues of moderation. Says Jamaat-e-Islami's Master Habibullah: "India has a stand on Kashmir. Pakistan has a stand on Kashmir and the people of Kashmir have a stand on Kashmir as well. It's not impossible to find a (political) point where all the three apparently irreconcilable stands must melt into an amicable solution." Such a remark is astonishing, considering that the Jamaat has been the most vocal advocate of Kashmir's merger with Pakistan.

Observers feel the people in the Valley have scaled down their expectations: 14 years ago azadi was what the Kashmiris were hell-bent upon; peace is now their top priority. They are willing to be flexible in the search for a solution. They are tired of violence and disruption in their lives. As Parvaiz Koul, a physician, says, "The world outside has changed drastically and it is a welcome development that most of us have started agreeing we can't exist in isolation of the changed global realities." Parvaiz says most of his patients feel economy, healthcare and education ought to take precedence over all other issues—even political.

No wonder, last week's joint declaration sent a frisson of excitement through the Valley. Better Indo-Pak relations is an issue of life and death for people here, a sentiment others elsewhere in India can't possibly appreciate. This is best articulated by Mohd Shafi, 48, a businessman: "While we in the Valley were glued to TV, monitoring the outcome in Islamabad, I phoned a friend in Madras. He said he was more bothered about the India-Australia match than with what was happening in Islamabad. It didn't even have an academic interest for him. He doesn't even know where the LoC is, or the ferocious relentless manner in which the Indian and Pakistan armies shell each other. For us, though, Indo-Pak relations mean a difference between life and death or at least between a decent, tension-free life and a wretched existence."

Shafi might breathe easy now, the Valley could sleep in peace and the 14-year-long nightmare, hopefully, has exhausted its chilling images.

The Guns Won't Be Muzzled