Indian adherents of the death-defying cult of speed worship Superbikes 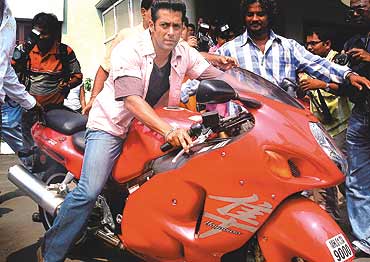 A 300 km per hour bolt of chrome and rubber, at first a little whining dot in your rearview mirror. But before you can look again, it's already a full-throated roaring mass of streamlined blue steel electrifying the road under you, travelling much too fast for man, cop or God to catch. Intermittent glimpses of a helmet flashing on and off as it catches the streetlights down the length of the road, and in a poof of grime, dust and fumes, he's gone. Welcome to the little-known but utterly unhinged world of superbikers.

The latest must-have among young, adrenaline-craving speed junkies are superbikes. Ducatis, Hayabusas, Yamahas and Kawasaki Ninjas: these four-cylinder road monsters that can ignite the road at speeds of up to 300 km per hour are lusted upon by the biking fraternity. But, since each one has to be imported, and a 100 per cent duty paid, they can burn up your savings account even...