We were young, the movies still cast their magic. And then Brando happened. 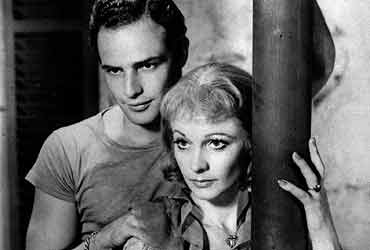 outlookindia.com
-0001-11-30T00:00:00+0553
The death of Marlon Brando revived vintage memories. The memories were not of Brando but of us. You see we grew up with him. We grew up with Hollywood. These days people fed to their gills with movies screened on TV cannot possibly understand what movies meant to us. There was no television. We were lucky if we could see more than one movie a month. Getting to see the movie was tough. Our mother wouldn’t allow us. After our dark scowls and monumental sulks for an hour or two, she would relent.

Then the mad rush to the theatre. We bought the cheapest front-row four-anna tickets called ‘chazees’. We studied in a macho school in a macho town. I was in Karachi then. On those dreadful days when a boy had to accompany his parents or sisters and watch the movie from higher seats at a respectable distance from the screen, he seldom raised his eyes for fear of encountering derisive stares by friends.

Watching movies was not just about seeing stories on the screen. We identified with the stars. They were our role models. In my first phase, aged five or six, we were Errol Flynn or Tyrone Power. I saw Adventures of Robin Hood on my sixth birthday. With sticks we displayed our swordsmanship, click-clack, click-clack, fencing up and down the terrace.

But soon we grew up. We were all of eight to ten years old. We became gangsters. We became James Cagney or Humphrey Bogart or George Raft or Edward G. Robinson. During the war years, there was a spate of gangster movies. I remember one movie we saw when I was eight. It had great promise because of its fine cast. It had Humphrey Bogart, Sidney Greenstreet, Peter Lorre and Claude Raines. One couldn’t ask for more. It turned out to be the worst movie we ever saw. The story made no sense. There was no bang-bang, no biff-thud. We came out laughing. We rolled on the ground spluttering with laughter, gasping, "It’s the worst movie of all time!" That movie became a favourite joke.

After a decade, when I was 18 and in Delhi, more and more film critics were talking about that movie as if it were an event. That puzzled me. Out of curiosity, I saw it again when I got the chance. The memory of screaming that it was the worst movie ever made left me red-faced by the time it ended. It was one of the greatest love stories ever filmed. The movie, of course, was Casablanca. I guess a decade can be a long, long time.

I first heard of Marlon Brando in the early ’50s after I had entered college. Sir Saeed Jaffrey, Jeff to us, spoke about him. Jeff was raving about Brando’s performance in DesireeOthello in our college, St Stephen’s. Jeff lived in the local YMCA. So did Abu Abraham, a struggling cartoonist those days. I was a student and played tennis with Abu at the YMCA. Abu, Jeff and I often talked animatedly about films.

Then I got to see On the Waterfront and understood what Jeff was trying to tell me. Errol Flynn and James Cagney were forgotten. Now it was Marlon Brando. He was a rage among film buffs in college. We became Brando Broodies. Here was a macho brute with deep inner feelings. A muscular philosophical bum. Denim jeans had not made their way to Delhi then. So we wore sweaty T-shirts over crumpled trousers and sat in the University Coffee House, clasping our cups of coffee, mumbling to each other. The Miranda House girls were not impressed. Whenever a girl in an adjoining table looked our way and tittered with her companions, the mumbling turned to angry muttering.

Brando was the last of the Hollywood icons that became a role model. He was arguably the greatest screen actor of the 20th century in the English-speaking world.His range was phenomenal. Whether it was gambler Sky Masterson singing and throwing the dice in Guys and Dolls, washed-up pugilist Terry Malloy in ...Waterfront, a Japanese in Teahouse of the August Moon, a Latin revolutionary in Viva Zapata or a Sicilian mobster in Godfather, each scintillating display of versatility shone with the Brando magic. It was only Paul Muni, before Brando, who had a repertoire equally spectacular. As a Chinese peasant in The Good Earth, as Al Capone in Scarface and as a Mexican leader in Juarez, Muni had anticipated Brando by more than a decade. But Muni lacked Brando’s magnetic star quality.

I remember the awe with which I heard Brando’s Mark Antony speech in Julius Caesar. He did not say "Friends, Romans, countrymen..." with the theatrical flourish we normally associated with the speech. He was a raving demagogue silencing a howling mob. He did not sarcastically sneer, "Brutus is an honourable man...". He snarled the words like an animal, mesmerising the mob with his rage. Suddenly, since he never deviated from the script, one realised what Shakespeare must have conceived when he wrote the play.

Brando hypnotised us with his magic to grab our souls. By creating images and attitudes Hollywood stars gave us dreams that shaped our lives. Brando was our final and most vivid role model. After that, we became adults. Now we watch and savour the art of De Niro, Al Pacino, Dustin Hoffman and Tom Hanks. It is fantastic entertainment. But there are no more dreams. We only have memories.

(The author is an eminent cartoonist and commentator)