The Why Of A Murder

One week has yielded many suspects but few solid leads on the motive. Did Phoolan fall to politics, caste or property? 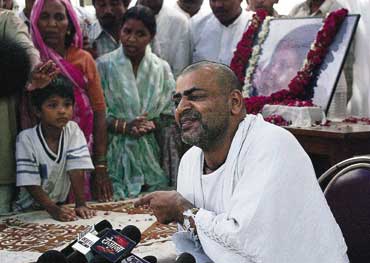 Was some legally astute brain involved in hatching the conspiracy to kill Phoolan Devi? Or was it just an unintelligent plot, bound to boomerang on the conspirators—and one which would ultimately ensure their conviction? All of last week, those investigating the murder of the bandit queen-turned-politician grappled hard to make head or tail of the events that followed the murder of the Samajwadi Party MP on July 25 outside her official bungalow in New Delhi. Although the main suspects—Sher Singh Rana, Ravinder, Rajbir and Shekhar—fell rather too easily into the police net, the investigators have made little progress in solving the mystery behind Phoolan's murder.

Late into the week, three more suspects were arrested, including Keshav Chauhan, an SP worker from Mirzapur, her constituency. The other two were Praveen Mittal, an advocate, and Amit Rathi, who allegedly provided the arms to Rana. But ten days after the killing, a key question still remains unanswered—what was the motive?

It seems like Sher Singh Rana, the prime accused, purposely left behind several clues to "lure" the police towards a certain line of investigation. Rana's green Maruti car was abandoned half-a-kilometre away from Phoolan's Ashoka Road residence; the assailants left two country-made revolvers at the spot while two other pistols were recovered from the car; Rana virtually gave himself up to the Dehradun police on July 27 and claimed to have committed the murder to avenge the Behmai killings.

According to the police, after his surrender, Rana appeared rather too eager to cooperate with the investigators. But most of what he uttered were blatant lies. For example, he had told the police that one of his cousins, Ravinder, was the second assailant who shot at Phoolan's security guard. But later it was found that the second person involved was a Roorkee-based...