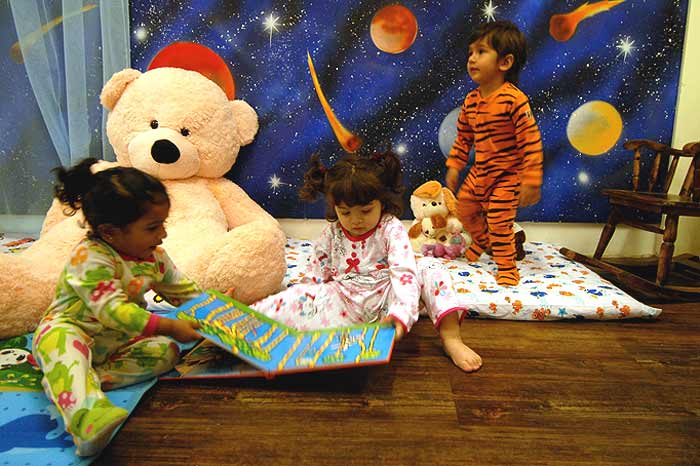 Rina* and Sania* have just celebrated their first birthday at home. There’s nothing unusual in that—if you leave out the fact that home for the twins has been Care Plus World, a 24-hour creche in Delhi, since they were 45 days old. Their mother, caught in a family crisis, comes up from Mumbai once a month. Rishabh*, four, is their creche “brother”. Admitted aged two, he sees his single parent mother on weekends. She has no one to take care of him while she works. For both mothers, the day and night care facility, which admits babies as young as a month for Rs 5,500 a month, is a real-life alternative to Mary Poppins.

Manoj Babu, Care Plus World’s proprietor, still remembers the traumatising time he faced when his wife fell ill shortly after giving birth to their baby girl. “I was taking care of the baby and visiting my wife at the hospital. Both our families declined to help us because we had had a love marriage,” Manoj recounts. That is why he started the iso 9001-certified creche, with an attached playschool and Montessori, three years ago. Since then, he has been approached by unmarried mothers, desperate single working parents, couples on the verge of divorce, parents with odd job timings and even those who want to party hard after work.

As urban India puts ever more pressure on working couples, professional (and top class) childcare, which extends beyond the usual 9 to 7 gig, is slowly becoming a necessity. Nowhere is this more apparent than in Hyderabad and Bangalore, the IT and BPO hubs of India. “Both my husband and I work for Accenture and we had to go for a training programme to Delhi for three days last May. My daughter was only 14 months old at the time,” says Rattika Jain, a Bangalore resident. She was overjoyed when she came across Kids Space Academy run by Sucheta Madhusudhan, whose story was quite similar to her own. Sucheta, an MBA, had to quit when her daughter’s daycare timings and her work hours clashed. “No daycare stayed open beyond 7.30 pm, which was ridiculous given the deadlines I had to meet at office and how much time it took to travel from one place to another,” Sucheta recalls. To spare other women from having to quit working for the same reason, she started a 24-hour child care centre that doubles as a preschool with iPads and audio books as learning tools. “Parents often pick up their kids at 9-10 pm or drop them off early in the morning, depending on when their shift starts or ends.”

The issue is so acute that NASSCOM decided to offer “special discounted rates” for members of Esperanza, a pre-school chain that provides 24-hour childcare, year round. With 65 per cent of its wards coming from “software employee” families, Esperanza, with six branches in Hyderabad, two in Bangalore and one in Pune, is suitably hi-tech. Parents get a daily activity log outlining what their darlings have been doing through the day. They also have the option of asking for by-the-minute SMS updates and the luxury of watching video feeds of their children on smartphones and laptops. “Everything is automated. When a task is scheduled, say giving a child his medicine, a computer-controlled alarm goes off to remind the caretakers and once it is done, an SMS is sent to inform his parents,” says Chandra Sekhar Vasireddi, Esperanza’s chairman. Most parents opt for the daily 12-hour package that can be availed of anytime, day or night, which costs (p.a.) Rs 66,000 in Hyderabad and Pune and Rs 72,000 in Bangalore. “The costliest package is Rs 18,000 per month, for 24x7 care. We have four kids, all in Hyderabad, admitted under that programme,” he says.

Realising the demand for creches that don’t close shop early, some companies like tesco in Bangalore have started running creches inside the company premises that shut at 9.30 pm—coinciding with the end of the last shift. That’s what allowed Mandeep Raman to go back to work once her maternity leave was over, instead of taking the usual one-year break. “When you hear horror stories like that one about the maid who rented out a child to a begging ring, such in-house day care with extended hours lets you concentrate on work instead of worrying.”

As urban India puts ever more pressure on working couples, professional childcare, beyond the 9-7 outfits, is a necessity.

But the need for evening and night creches isn’t fuelled only by work pressures. While counselling couples at mindCraft, a psychological services centre in Mumbai, Dr Shwetambara Sabharwal realised that marriages were falling apart because couples couldn’t spend time with each other. “If they were not working or running errands, they were teaching their kids or playing with them, trying to stuff in fun and education in the little time they got.” So she decided to make it easier for her clients to have an evening of guilt-free adult fun, once in a while. “I started a night creche that was both fun and educational, operating only on Friday and Saturday, between 7 pm and 2 am.” The mindCraft night creche, which charges Rs 750 an evening, is in a different league from the run-of-the-mill ayah-run night care facilities. For one, it is conducted by Dhruti Lingam, a first-aid-trained Montessori teacher, who turns each night gathering of six-seven kids into a cross between a birthday party and a fun classroom. No matter the activity, be it puzzle-solving, playing dress-up, learning songs, writing stories, or just watching movies, the evenings always end with the kids having dinner and falling asleep by 9.30 pm. “This way, the parents have fun knowing that their kids are having a great time and are in a safe and hygienic environment,” Shwetambara says.

Even if there are relatives to play caretaker, the concept of evening child care is finding takers, simply because the kids have as much fun as the parents. Cashing in on that sentiment is Gambolla, an activity centre, located on Commercial Street, Bangalore’s shopping hub. Mahita Fernandez, who runs Gambolla, says the bulk of her customers come in on Friday, Saturday and Sunday. “Many parents leave their kids here before they take off to go shopping, eat or watch movies. My own experiences with my son show that when parents go out, the child wants to go out and have fun too. They don’t want to be cooped up at home with an ayah or stay with relatives because that is so dull. So adults leave their kids here, where they have enough to occupy them. The parents can then go do their own thing, without triggering any tantrums.” The hourly rate is Rs 150 till 7.30 pm, which goes up to Rs 300 after 7.30 till 9 pm, when Gambolla closes up. Most parents are glad to pay, even getting Mahita to order their kids pizza or burger dinners, asking her to “add it to their tabs”. For today’s life in the fast lane, kid-free time is a welcome change of pace.

Leaving your child at a night creche? It is best if another parent, who is a client, has recommended the place. Ask if the centre can provide a detailed report of your child’s activities and check if the centre is well equipped by following the checklist below:

Who Should Be Next President?