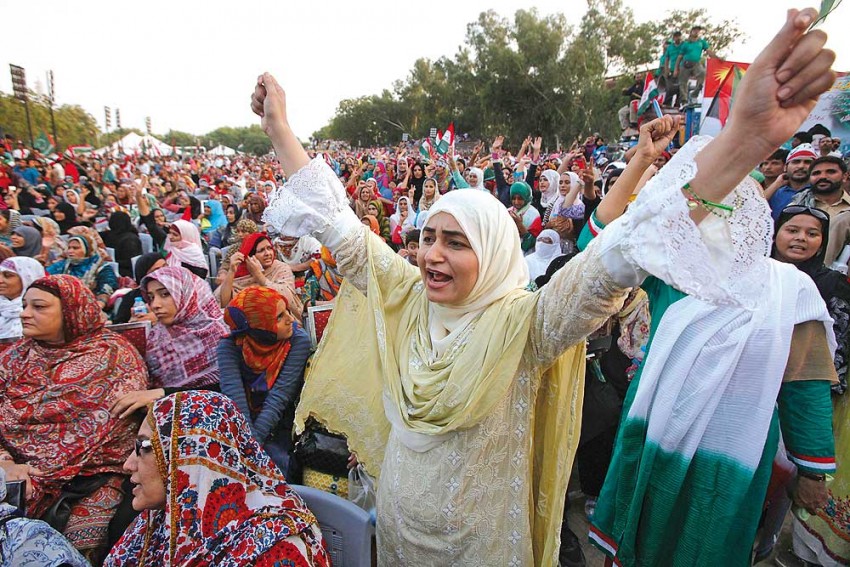 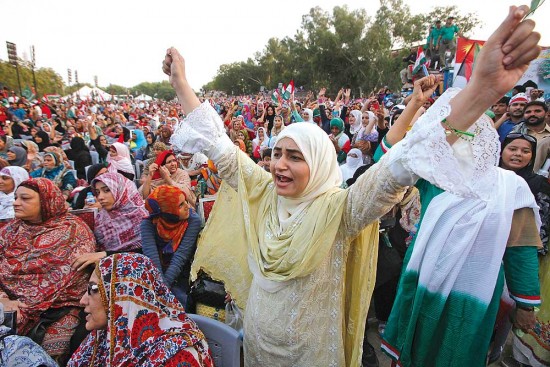 On Independence Day, along with revered state heroes, a nation needs to celebrate contemporary feats of heroism too. This August, Pakistan has been celebrating the achievements of 21-year-old Samina Baig. After conquering Mount Everest, Samina, with her brother Mirza Ali, is now heading towards Mount Elbrus in Russia. Having already had the better of the highest continental peaks in Argentina, Antarctica, Tanzania and Alaska, Elbrus will make them the first Pakistani siblings to have conquered all the highest peaks in seven continents.

But Pakistan’s government of the day has little time for celebrating the feats of the girl from Shimshal valley in upper Hunza. At the vanguard of the forces bes­­ieging it are hijab-clad, sloganeering women from Punjab, headline-grabbing footsoldiers of Can­ada-­­­­based firebrand cleric Allama Tahirul Qadri’s Pakistan Awa­mi Tehriq (PAT). With expectations and apprehensions surro­u­n­ding Qadri’s Inq­ilab March from Lahore to Islam­abad on Aug­­ust 14 reaching a fevered pitch as the date draws near, all eyes are on the so-called ‘chicks with sticks’.

Political commentator and former PML(N) member Ayaz Amir predicts dire times for Nawaz Sharif’s government. He speaks gushingly of PAT’s women brigade. “No political force, no organisation in Pakistan, has the kind of Dukhraran-e-Millat (daughters of the nation) that the PAT has. To see them raising their clenched fists and shouting slogans for Mustafvi Inqilab (revolution of the prophet) is to be cleansed of all cynical and defeatist thought.”

“There is a chasm between a decaying governance and a vibrant and dynamic society driven by citizen activism.”
Mushahid Hussain, PML(Q) senator

But Qadri, who has crossed swords with the PML(N) government by leading a raucous movement promising a revolution that would end corruption, is not the only one taking aim at Islamabad’s power centre. Also in the fray is the Pakistan Tehreek-e-Insaf (PTI) of Imran Khan, who has levelled a formidable battery of charges against Sharif, the most serious being rigging polls to win the general elections in 2013, and high corruption. Coincidentally, Imran too will lead a march on Islamabad—the Azadi March—on August 14, with the ult­imate aim of toppling the government.

In Imran’s and Qadri’s challenges many see a threat to Pakistan’s hard-won dem­o­cracy, as they are supposedly backed by that ubiquitous player in Pakistani sta­tehood—the army. The idea is not as far-fetched as it sounds—the army and the Sharif government have not been on the best of terms. The army is unhappy with the prosecution of Gen Musharraf under Sharif’s watch, and feels Sharif supported the Geo group when the latter held the army and the ISI responsible for the attack on its lead anchor Hamid Mir. As it is in the throes of a desperate fight against militants in north Waziristan, the army also disliked Sharif’s attempted peace overtures with the Taliban.

On the eve of its 68th independence day, this then is a snapshot of the complexities staring Pakistan in the face. Fortunately, the other pillars of power—the judiciary, the media, civil society and parliament—have little appetite for reversing democracy’s gains.

Yet, there is no denying the deep political unrest. “The political system and large chunks of the political class in Islamabad is out of sync with the masses, so there is a chasm between a decaying, colonial-style state system of governance removed from the common man, and a vibrant society driven by self-starter citizen activism in which youth, women, civil society and the media are in the vanguard,” PML(Q) senator Mushahid Hussain tells Outlook. Indeed, fear and uncertainty has gripped the entire nation as it waits for PAT and PTI to execute their threat to besiege Islamabad with their twin, mammoth marches on August 14. 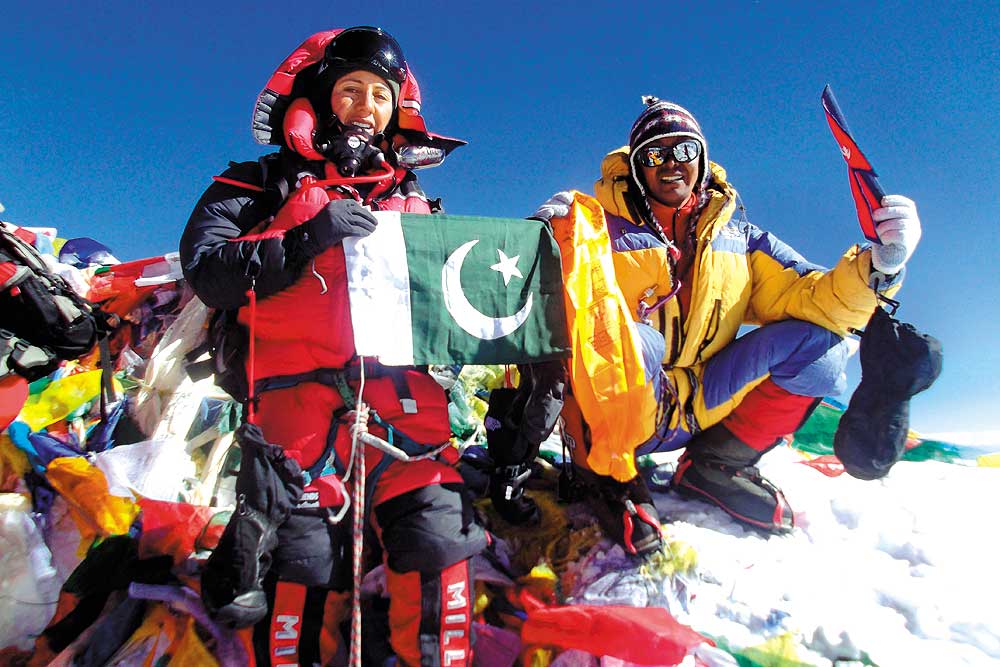 For Pakistan Samina Baig on Mt Everest. She now has Mt Elbrus, Russia, on her sights. (Photograph by AFP, From Outlook 25 August 2014)

The mood in the commentariat is often sombre. In an editorial in Friday Times, Najam Sethi writes that in Qadri’s speeches, “the rhetoric seems ominou­sly like an invitation to a beheading of democracy by the military...while Nawaz Sharif has not been able to display the wisdom and vision expected and is partly responsible for the mess in which we find ourselves”. Political analyst Ghazi Salahuddin warns that “if the primitive passions that have held us hostage for so long are not consciously suppressed and if the wounds that we have suffered are not healed, a change prompted by mass agitation will be meaningless”.

And the Pakistan Institute of Legislative Development and Trans­parency warns in a report that even if none of the parties involved—PML(N), PTI and the army—really want a military takeover, “the possible escalation in violence and breakdown of law and order may lead to that eventuality...this grave situation has serious implications for civil-military  relations, which were not ideal even before the march was announced.”

Former ambassador and PPP leader Sherry Rehman, head of the Jinnah Ins­titute, says the streets reflect the pri­nc­i­pally elite nature of political battles, with common South Asian deprivations def­ining the daily frustrations of people at the bottom of the social pyramid. “Pak­istan is facing a political crisis this Ind­e­pendence Day, mostly because key pla­­­yers are unable to find a political path forward for reforms based on consent. The real issues such as electricity shortages, internally displaced persons, public narrative deficits in supporting counter-­terrorism, and others have been bru­­shed aside in the clamour,” she tells Outlook.

Even facing up to the decades of gross neglect in key social services that PAT’s ‘revolution’ hopes to address, Mushahid Hussain is one of the optimists. “The future is bright, given the demographic advantage of a youthful population, with some of the Third World’s most talented and creative young women and men,  who are increasingly returning home, reposing faith in the future of their country,” he notes. Agrees Samina Ahmed, Pakistan head of International Crisis Group: “Pakistanis are proud of their country but fearful of the future. There’s still hope for this country so long as there are democratic avenues to address demands and grievances.”

Pakistan in 2014 is certainly not what the nation’s founding father Jinnah had envisaged. The Qaid-e-Azam would certainly find it tough to comprehend the ongoing military operation—Zarb-e-Azb (the sword of the holy Prophet)—in Waziristan. In reality, it’s a cleaning-up operation for the mess ghq has created over decades of following a self-serving, myopic foreign policy during self-rule and democratic interludes.

“Pakistan’s foremost challenge is combating the threat posed by the various groups trying to impose extremist religious ideologies on democracy and the social norms we have evolved over the centuries,” says former ambassador to India Aziz Ahmed Khan. Future challenges, he says, will be whether the nation will win the battle against “the...extremist narrative that has taken root in a lot of our educational and religious institutions and the confusion it has created in the minds of ordinary citizens”.

Relations with India, too, figure in the minds of many. Ershad Mahmud, a Kashmiri and executive director of the Centre for Peace, Development and Reforms, tells Outlook, “In my view, Pakistan is still going through an internal debate and wrangling between several state institutions to form a policy which could transform its relations with neighbours, especially India, and solve key outstanding disputes such as Kashmir”.

Aziz Ahmed Khan also underscores the need to normalise ties with New Delhi. “Hopefully, the Narendra Modi government, with its comfortable majority, will be able to move more boldly in resolving all issues, including Kashmir, through a fast-track dialogue process,” he says. He hopes India won’t miss an opportunity, especially when most issues have been discussed threadbare over a long period and only require wise political decisions. “The present government in Pakistan seems ready for it. Here there is an acr­oss-the-board, political as well as public, consensus to have good relations with India and one only hopes that India will respond in a similar manner,” he adds.

Even by highly combustible Pakistani standards, as the nation teeters on the edge of political ferment, there is a sense of hushed premonition. Heavy containers guard the approaches into the capital, placed there to prevent mobs from the Inqilab and Azadi marches from entering the city. In Islamabad, petrol pumps are running out of gas, and grocery is flying off the shelves. There is on the surface not much to celebrate this August 14.

Asked how she would choose to celebrate Independence Day, Kishwar Naheed, the famous feminist and Urdu poet, told Outlook, “It reminds of me of what Marquez wrote in his novels.... Pakistan at the moment is in the grip of lost images. Problem is that it’s the elders who are creating these complexities for the  young generation. This is the time for them to enjoy life, not parrot slogans that PTI and PAT are trying to teach them”.

A pall of gloom hangs over the many gains and successes notched up by  Pakistan in recent days. Ominous questions do the rounds. Will it be back to the barracks on August 14? Columnist Nadeem Paracha wrote in Dawn, “Just like it did in 1971, Pakistan once again is facing a seriously existentialist dile­mma. Its diverse sects and sub-sects are at each others throats and the state is at war with exactly the same muj­ahids that the country’s ideology had eulogised in the 1980s.” This is a state of the nation no Pakistani wanted.