The War She Won, But Only In Death

A PPP streak and no Bhutto in place. It's make or mar for Zardari. 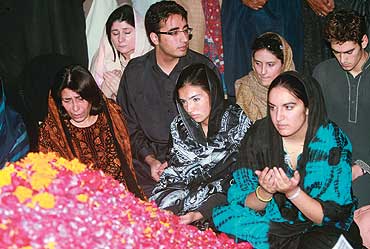 outlookindia.com
-0001-11-30T00:00:00+0553
In any other party office there would have been whoops of joy over the kind of election success wrung from under the nose of the establishment by the Pakistan People’s Party in the wake of the assassination of their leader Benazir Bhutto. Even when the Congress won after Rajiv Gandhi was assassinated, it was difficult to wipe the smile from the face of beaming party officials. But unable to campaign during the 40-day mourning period, Benazir’s rudderless party was also hamstrung by a grieving leadership struggling to come to terms with its loss and dealing with the new man at the helm—Bhutto widower Asif Ali Zardari, not exactly ‘Mr Popular’ and a novice in the kind of networking and powerplay his wife had mastered.

At the PPP office in Islamabad, party officials were hopelessly torn between congratulating each other and fighting back the tears. "Agar aaj yahaan Bibi hoti" was the constant refrain as the PPP snatched victory from Khyber to Karachi. Said a senior aide, "We finally got an election date from Musharraf, we thought we were at the door and then she was snatched from us...now we form a government and she’s not there." Adding a macabre twist on the midnight of February 18 was the ringtone of various PPP officials. As the cellphones buzzed, there was Benazir’s voice, raspy and rough, from her very last rally at Liaquat Bagh belting out, "Zinda hai Bhutto, zinda hai...."

As Zardari—missing from the walls of the PPP central secretariat plastered with portraits of founder Zulfiqar Ali Bhutto and Benazir—turns to government formation, the question remains: can this triumph from beyond the grave which has given the party a ‘government in waiting’ status sustain and feed the Bhutto legacy until the son and heir, Bilawal, is ready to take on the mantle?

The problems lie with the old order changing, making way for the new. This is a new PPP where for the first time since 1979 not only is there a man at the helm, but a man who does not carry the surname or the swagger of a Bhutto, for whom political demagoguery is second nature. No doubt, Zardari post-Benazir is a different creature from the party-loving, polo-playing one prone to indiscretions of youth. He’s cautious, playing his cards over a possible confrontation with President Musharraf close to his chest even as he opens communication lines with Nawaz Sharif.

Yet Zardari knows well that unlike Benazir, he is essentially an outsider. He knows the party seniors have rallied behind him only because they are unwilling to do anything to harm the Bhutto legacy. But he’s slowly setting his own course, listening like Benazir did to all the party luminaries, but taking his own decisions. "It’s not easy. Where before there was Benazir who instinctively took the right decisions, now the buck stops with me," he said when we met the day after the elections.

That he’s yet to master the nuances of politics was evident when he went out of his way, going to meet American ambassador to Pakistan Anne Patterson at the embassy—something which Benazir would never have done, say critics. His complete sidelining of respected party stalwart Makhdoom Amin Fahim and Benazir’s political secretary Naheed Khan—both of whom she consulted on a daily basis—has also been the subject of much discussion. The two ran the party during her eight years in exile, their understanding of the party was considered invaluable in keeping the flock together.

Zardari instead has built up lesser luminaries like Babar Awan and Shah Mohammed Qureishi, son of a former Punjab governor under the hated Zia-ul-Haq regime. He does have some backing for promoting Aitzaz Ahsan, the charismatic lawyer who has become a symbol of the anti-establishment lawyers’ movement and who’s seen as set to play a bigger role now. But with this trio having their roots in Punjab rather than Sindh—where the Bhuttos have an almost mythic status—many believe that Zardari, in alienating the old guard and in shifting ever so slightly towards leaders from Punjab, could risk a split in the PPP. No non-Sindhi has ever run the PPP, which curiously never fails to harp on its pan-Pakistan credentials. Some say Zardari should break with Benazir’s policy of nominating her aides, allow internal elections. Others say it will only split the party further now that there is no Bhutto glue to keep it together, pointing to what Narasimha Rao did to the Congress after Rajiv. Champing at the bit is Benazir’s niece Fatima and family patriarch, uncle Mumtaz, desperate to reclaim the Bhutto legacy. But that’s a flank Zardari may not have to worry about for now.

Close aides have however warned that if Zardari moves closer to Musharraf, he could risk the ire of the party which, rightly or wrongly, blames the president for their leader’s assassination. "This election was won with her blood, we cannot do a deal with her killers," says one senior party aide. Although that is exactly what Benazir had attempted to do. But in death, she can do no wrong. In life, her widower must ensure he does not either. Or else lose the central message of this election—a final chance to redeem the flawed legacy of the Bhuttos.

'Indian Generals Don't Step Out Of Their Domain'