The Wages Of Fame

As if in reaction to her global renown, some in Pakistan revile Malala 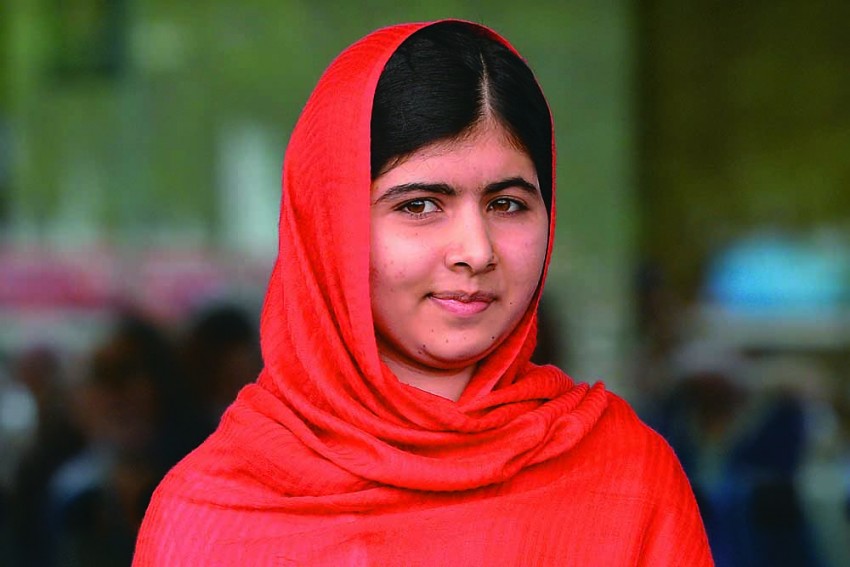 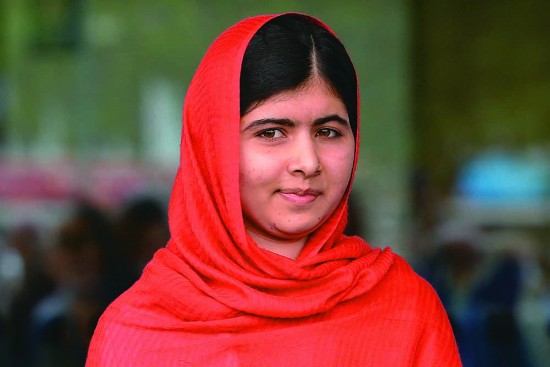 On October 9, 2012, armed Tehreek-e-Taliban men stopped a school van in Swat, in Khyber Pakhtunkhwa, carrying schoolgirls. “Who is Malala?” they barked. Once the girl was identified, one of them aimed a gun at her head and fired point blank. A year later, on October 8, 2013, having survived miraculously, the teenage schoolgirl rose to reply, “I am Malala”. Here she was, dressed defiantly in red chadar, on the cover of her recently released autobiography. As I Am Malala: The Girl Who Stood Up For Education And Was Shot by the Taliban flies off boo­kshelves here, and seemingly undeterred by all the revulsion they have attracted for their shameful act (albeit one amongst many), the Taliban have announced that they would attack all stores selling the book.

It’s been a curious rollercoaster. Last year, it was an anthemic slogan—“I am Malala, we are all Malala”—that reso­u­n­ded around the country in waves of ind­ignation, as outraged Pakistanis rallied around her, with prayers for her reco­very and candle-lit vigils. As she came out of hospital in Birmingham in January, even she acknowledged, with wisdom beyond her years: “As Malala fell, Pak­istan rose. Everyone said, ‘I am Malala’, no one said, ‘I am Taliban’.” Today, the 16-year-old Pakhtun girl from the restive Swat valley, who refused to be cowed down by Tal­iban edicts that proscribed  girls’ education, is battling a conflicted ‘reaction to a reaction’ from her compatriots.

Malala is a celebrity in her country; many, when asked where they come from, say, ‘I’m from Malala country’.

For, in the first few months, she was swept up by a global adulation factory. It see­med the West was reacting as if Malala Yousufzai was their icon—a situation that would have seemed farcical for her admirers looking on bemusedly from Pak­istan, if not for the girl’s own equanimity. As the Taliban swore reve­nge on her, she won one laurel after another—an address at the UN General Assembly (and a standing ovation after it), the EU Sakharov human rights prize, a nomination for Nobel Peace, an invitat­ion to the White House and to Bucki­ngham Palace, and countless laudatory write-ups and admiring interviews. One may have exp­ected all the adulation to spawn a heady feeling in a teenager, but Malala remains surprisingly focused on her goal. “Thank God I’m not dead,” was the first thought that came to her as she regained consciousness in hospital. She says she bears no grudge against the men who tried to kill her, would never seek revenge, but instead would ask the Taliban not to deprive their daughters of education.

Her other responses too spoke of a certain composure. “I thanked Pre­sident Obama for the US work in supporting education in Pak­istan and Afghanistan and for Syrian refugees. I also expressed my concern that drone attacks are fuelling terrorism. Innocent victims are kil­led in these, and it leads to resentment among Pakistanis. If we refocus efforts on education, it will make a big impact,” said the girl who had an audience with US president Barack Obama at the White House even before PM Nawaz Sharif.

Pakistanis hailed Malala’s statement. They felt she had the bearing and self-assurance befitting a head of state. Moreover, many feel she was accorded the respect once reserved for another daughter of Pakistan, Benazir Bhutto. As if on cue, Benazir’s daughter Bakht­awar Bhutto Zardari duly tweeted that Malala should become prime minister.  In fact, so much is she a celebrity in her country that many Pakistanis, when asked where they come from, reply proudly, “I am from Malala country”.

Even Imran Khan— nicknamed Taliban Khan for his alleged sympathies—has ceded ground to the consensus around her. The Pakistan Teh­r­eek-e-Insaf chief had bordered on the dismissive in his reactions to the shooting, which occurred as he was preparing ground for elections; the PTI later swept in Khyber Pakht­un­khwa. Now he says, “Malala Yousufzai represents the struggle of girls and women everywhere against tyranny and opp­ression”. Even so, predictably, Imran did not utter a word against the force that Malala fought so courageously.

For all her fame, though, the scale and orchestration of her international hero status is now eliciting a mixed reaction in Pakistan. Even in Swat, many wonder why so much attention is being lavished on a single girl. To the extent that Mal­ala had to defend herself against the TTP claim of being a western mascot, saying “I am a daughter of Pakistan”. Still, her success is grist to the mill of internet contrarians, a tweeting, blogging, Fac­e­­booking horde who say Malala’s UNI­que aura is a product of the West and its media. How can someone be shot in the head and survive, some sceptics ask. But even some sane voices are concerned  that Malala is being ‘over-packaged’.

Sceptics in Swat were angry when Malala was nominated for the Nobel. Her name is spoken there in whispers.

“Yes, she is in danger of being overpackaged and objectified, but so what?” asks Sherry Rehman, chair, Jinnah Inst­itute, describing ‘the Malala Moment’. “At this level of global stardom, some PR-cum-development-world mac­­­h­inery has got to grind its mills. That’s not the point. Yes, there are hundreds of brave young Pakistanis being egged on to ask why their trauma didn’t propel them to fame, but that’s not the point either.” Of course, there are radicals who think Malala and her story is an outright lie, aimed at defaming the Taliban. Rece­ntly, Bri­tta Petersen, country director of the Heinrich Boll Foundation, said, “After the attack, after she left the country and especially after she spoke before the UN, there has been a downright disgusting campaign against her”.

After the Taliban iterated its threats recently, girls in Malala’s hometown had a freshly-painted board honouring her removed as they feared becoming easy targets for the Taliban. Though freed by the army after months of being in Taliban hands in 2009, fear runs deep in Swat. Malala’s name is spoken but in whispers, any public association with her shun­ned. Vile imprecations do the rounds. “Mal­ala’s father has been accu­sed of instrumentalising his daughter. He has been called a pimp and people have called her a ‘whore of the West’,” adds Petersen. 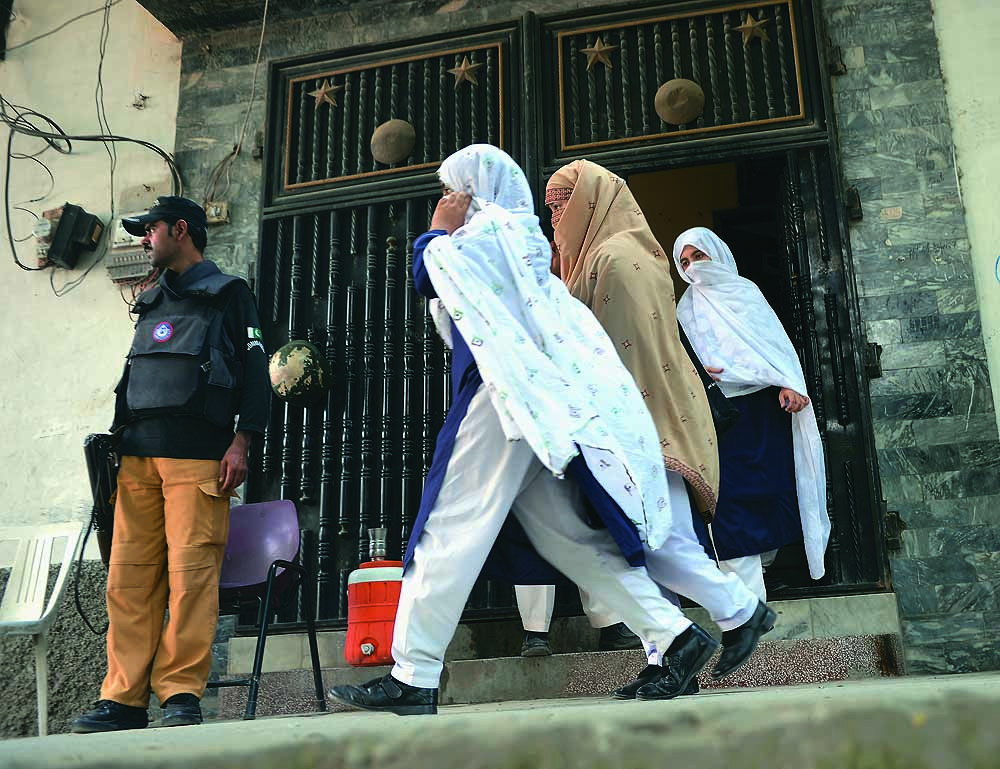 Police keep guard as girls come out of school in Mingora town, Swat valley. (Photograph by AFP, From Outlook 28 October 2013)

Indeed, Malala-sceptics in Swat were angrily surprised with her Nobel nomination, demanding to know her exact contribution. Others suspect that just as the CIA had used the NGO Save the Children to track down Bin Laden, the Americans are using Malala for their own ends. Not only are common citizens questioning her stardom, the querulousness extends to MPs from the PPP and the PML(N). “What about other girls who were with Malala when she was shot? They too defied the Taliban and went to school. They too got injured but were ignored by the state and media. Malala’s father was working for the CIA in Swat, and now they are trying to protect his daughter. Very much like when they tried to protect Raymond Davis and flew him out of the country,” one parliamentarian recently told Outlook.

Still, why do some people hate Malala with such vehemence? In an article titled Hating Malala, journalist Cyril Almeida wrote in Dawn: “It’s the shared belief between the Taliban and the public in the essence of the Taliban mission that is the principal threat—the state can, in theory at least, eliminate the purveyors of an ideology that make it possible for so many to hate a teenage girl who was shot in the face for speaking about a girl’s right to education.” Sherry Rehman also blames a rightist view that conflates Islam with the worst excesses of millenarian militancy and misogyny that demonises Malala as the handmaiden of a satanic coalition of western powers. Rehman should know. Extr­emists had targeted her, driven her underground and charged her for ‘blasphemy’ when she tried to tackle the prickly issue of Pakistan’s blasphemy laws in Parliament.

“This protagonist is no longer a marg­inal voice, lurking in the shadowed, lay­­ered protections of guns, cash and sweaty muscle. This is the barbarian now at our gates. This is the extremist who spews hate on the internet, manufacturing cyber shrouds on women’s bodies, which they fetishise. This is the militant who threatens people at mos­ques if they question sermons that val­orise violence, in the name of a rel­igion that privileges peace above all. They all hate Malala for fig­hting back,” she says.

Away from both extravagant praise and virulent hatred at home, Malala basks in the light shone on her by an admiring world. Though well-intended and well­-deserved, it will pass soon, hopefully leaving her with a teenager’s life, full of possibilities. Let it not be said that the world deprived her of her childhood.

By Mariana Baabar in Islamabad